(Part 1 in the series covering GFG Resources can be found HERE.)

Below is a summation of the information received from my call with CEO Brian Skanderbeg and VP Marc Lepage of GFG Resources last week, Enjoy!

Obs! The following is highly theoretical at this point in time!

(I will expand more on this as well as metallurgy  in “Part 3”.)

I found Brian and Marc to be very professional and also seem very keen on keeping a good relationship with the company’s fellow shareholders. Marc has been very generous with his time both before and after the call, answering any questions that I might have had. On that note I actually e-mailed Marc and asked  if he could expand on my take that Brian seemed VERY excited about the team potentially having “solved” the structural puzzle at RSH, and this was his response:

“We have done a lot more data work (5,000+ more soil samples, VTEM survey and structural modeling) that had never been done. A lot of this work was driven by Tim Brown based on his experience at Cripple Creek (specifically the VTEM survey). This analysis was a key tool that worked really well for him at Cripple Creek to find gold mineralization. Also, we have consolidated all the information (see p. 12 of presentation) into one program which has given us a much better understanding of the district and will help identify the controls of the gold mineralization. The black line (potentially a controlling structure) on p.9 of the presentation is derived from an M. Sc thesis completed under EVG. We interpret the structure to have continuity to the north and may be important at the new discovery – the Cowboy target. There are many other important structures that were not historically mapped/interpreted given the depth of oxidation and difficulty in surface mapping in this terrain. This understanding is very important and is why Brian was enthusiastic about the structural interpretation.” 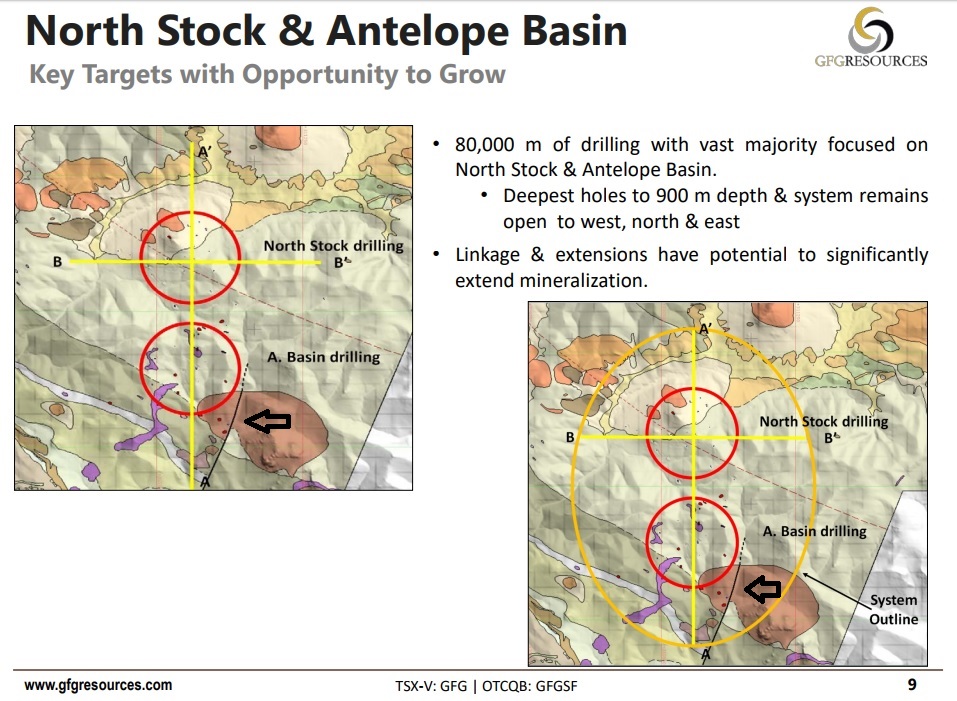 P. 9 from the presentation.

As a final note I would encourage everyone to watch the following presentations with CEO Brian Skanderbeg: