I often see people describing Novo as being very risky…

Like more risky than the majority of juniors. To that I would say that said people make the common mistake of confusing uncertainty with risk. Given that Novo has cash and a fully permitted, high grade, open pittable deposit in Beaton’s Creek I would argue that the market is not pricing in much more than say a good margin 1.5 moz deposit in the best jurisdiction on the planet (WA)… Which we might not be far off from having. Then we also have perhaps the most stacked share registry for any junior, including being the first junior backed by $40 B Sumitomo Corporation.

So is Novo very “risky” compared to most juniors?

I sure don’t think so.

What Novo has though is a lot of “uncertainty”.

… That is what we can’t answer today and what makes Novo so uncertain while not being riskier than the average junior in my eyes.

The potential value range for Novo is far beyond any other junior of this size which makes the upside “target” very uncertain.

Novo is the most asymmetrical bet that I know of. Extremely so when accounting for the stage and characteristics of Beaton’s Creek. If Beaton’s Creek (and Beaton’s Creek only) is a success then I would argue that the stock might be somewhat fairly valued right now. Especially since the system is wide open and that the nugget effect might understate the true grade.

The extreme uncertainty would be what all prospects, targets, systems and equity stakes will be worth at the end of the day. We already have over 1,000 km of strike of unconformities mapped which are prospective horizons for (outcropping) conglomerates.

What is the RISK that my investment in Novo will go to zero (That I will lose all my money)?

Every single item in the list below would need to fail on top of Novo running out of money and get no funds from any backer such as Sumitomo, Kirkland and Sprott etc:

… If all of the above would be completely worthless then Novo could go to zero.

So what are the odds that every single item in the list above would be a TOTAL FLOP?

… When I need to think about everything that would need to go wrong for a company to completely fail I know I am on to something unique.

If that is the case then one is not really paying for ANY upside that might come out of:

Again: Novo is extremely UNCERTAIN. Novo is NOT extremely RISKY compared to the average junior in my opinion.

One or more of the items above might quadruple the intrinsic value of Novo.

… The upside in Novo is the most open ended of any junior in my opinion.

Just consider what a fraction of our Egina lag gravel gravel ground could be worth:

… We got somewhere between 2,000-3,000 km2 of ground deemed prospective for these lag gravels and we just added more with the acquisition of the 47K patch area where a large bulk sample done by Artemis showed a whopping 7.1 g/m3. Furthermore the Paradise area alone is something like 10 x 17 km2 = 170 km2 (Note that the higher grade swales will not cover all that): 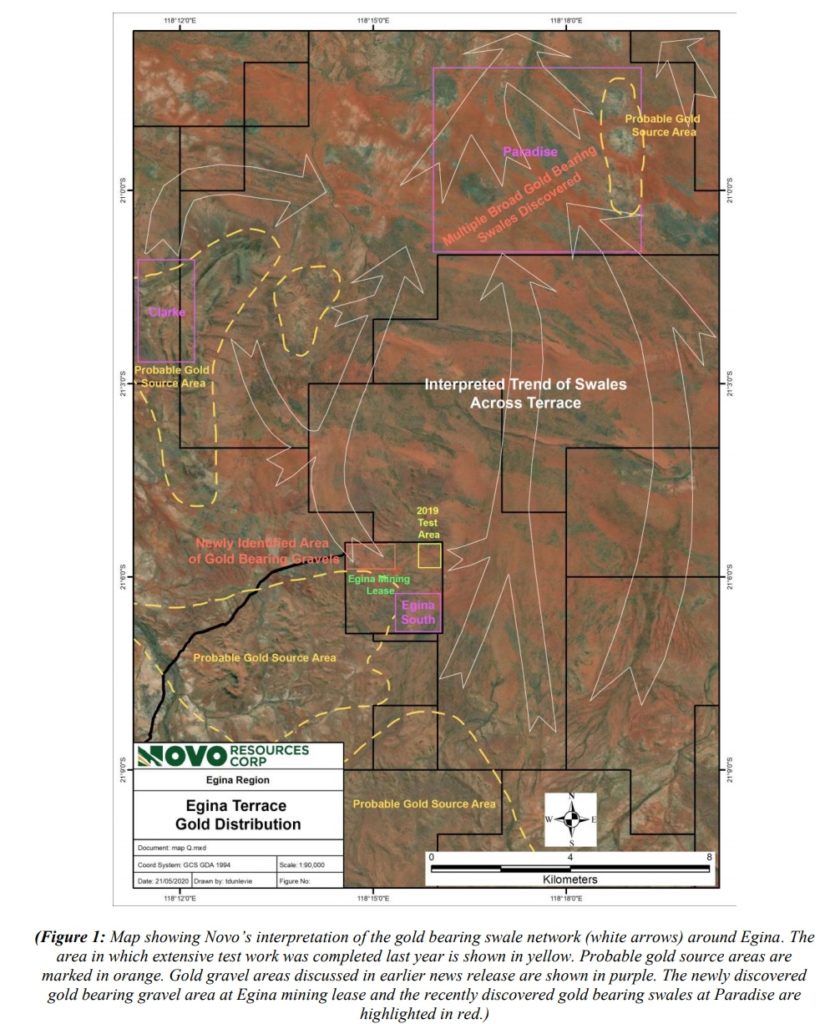 The above slide is still only captures part of the Egina Project which in turn is only a small part of the total Greater Terrace: 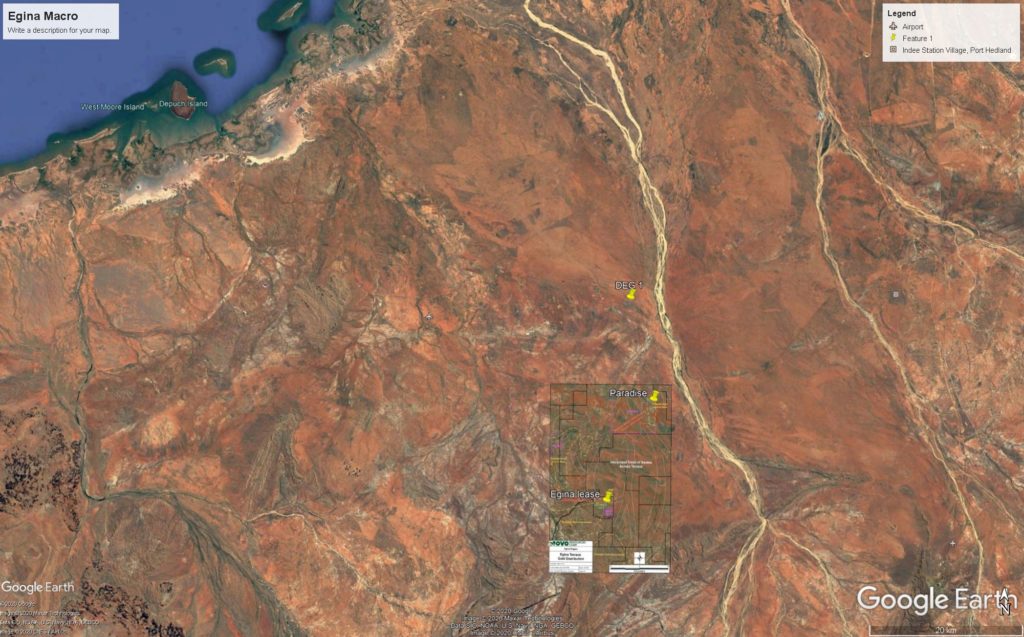 “You asked me to tell you what I thought was the potential prize for Egina and Novo Resources.

The potential prize as I see it is a mine with a hundred-year life, huge capital gains for shareholders on the ground floor, many employment opportunities for people in Western Australia, technical challenges and job satisfaction for those that way inclined, opportunities for indigenous peoples to benefit and opportunities for equipment suppliers to innovate. I also see a regular flow of significant dividends in the years to come.”

… Nothing of what this experienced operator is describing is reflected in the Market Cap of Novo Resources. If it’s a 10% chance this man is right then Novo would be cheap today. If it’s a 50% chance then Novo is currently trading at extreme fire sale levels relative to future cash flows. Now given that Novo has yet to find a “dead area” around Egina coupled with how extremely “simple” an at surface, gravel deposit would be to mine I think the chance of success here is order of magnitudes higher than what is priced in by the market today. Mr De Beers even argued that Egina looks simpler to mine than even De Beer’s CDM deposit to boot.

Compare it With a Typical Junior

A typical junior has ONE flagship project.

Said flagship project hosts all the risk and all the upside.

One project only needs one fatal flaw or one big mess up by management to sink it’s value and the value of the company with it.

A typical junior does not have more than one or a few avenues for potential value creation.

A typical junior with a typical project does not have unconventional scaling potential.

All of Novo’s primary assets are located in the #1 jurisdiction in the world.

Novo has the fully permitted, shovel ready Beaton’s Creek project in the #1 jurisdiction in the world.

Novo is backed by Sumitomo Corporation which has set aside 5 billion Yen to see Beaton’s Creek get into production.

Thus, if one assumes that Beaton’s Creek more or less can justify the current Enterprise Value then one could say that a Novo investor gets any upside in 16+ projects and 15,000 km2 of gravels and conglomerates almost for free.

In other words Novo has tens of bullets in the chamber, compared to one or a few for a typical junior, while also being back stopped by an asset more advanced than 99% of juniors.

A typical one asset junior only needs their one flagship project to flop in order to be a total failure.

Novo needs tens of projects to flop to become a total failure.

Since I have a background playing online poker I am constantly trying to gauge what is priced in and what is not priced in because that is where the risk lies.

… That is what dictates the risk/reward.

In Novo I see a “bet” that has an extremely small chance of leaving me with nothing.

In Novo I see a “bet” that has a very small chance of leaving me with the same amount of money (neutral).

I personally see Novo as the most asymmetrical (positively skewed Risk/Reward) in the entire junior sector.

There are only a few mining stock investor out there that would agree with my view. Most people see Novo as some extremely “risky” company. I think this is mostly because a) Most people haven’t put in the time to fully understand Novo (and Pilbara), and b) People confuse uncertainty with risky.

Perhaps the best example of risk/reward thinking is Novo staking pretty much every area within the whole Pilbara craton that has outcropping Mt Roe and/or Hardey Formation mapped. In the grand scheme of things Novo acquired 15,000 km2 of prime ground for peanuts. If Novo then happens to prove that any of these systems can be profitably mined then the implied value of all that ground goes up exponentially. Now THAT is extremely good risk/reward and cost/benefit.

We are relatively few people who can understand and appreciate the bets made by Novo. The obscene risk/reward that is present. If one does not grasp this concept and the concept of asymmetrical bets then you probably won’t invest.

On that note, only a fraction of poker players are winners in the long run which probably is because most people are not great at constantly thinking about and using the concepts described above.

I have personally been ridiculed more than once for having a poker playing background even though I think it might be what has benefited me most ever since I started my value investing journey.

The graph below is my “Winnings” graph, from the last site I played PLO on (5 tables at the same time), all the way up until I quit and switched to junior mining investing full time:

… My win rate was very high but I only played up to mid stakes before I quit so it’s not like I became a millionaire. I did however live and breathe risk/reward and implied odds for years and so far I think it has translated rather OK to the junior mining sector even though I didn’t know a thing about mining when I started investing at the end of 2015: … Extremely swingy due to my tendency to take concentrated “bets” but the trend has thankfully been up. Fingers crossed that it wasn’t all short term luck. I am of course also trying to become a better investor all the time and I hope the future results will reflect that.

Novo is the best “hand” I have ever seen in this space simply due to the unique combination of low risk of total failure together with the most open ended upside I have ever seen. Thankfully it’s not just me and the  Novo bulls thinking along these lines. We got $40 B Sumitomo Corporation backing us and even a CDM (De Beers) mine veteran calling this an opportunity of a life time. Sumitomo knows more than me and the De Beers veteran has infinitely more experience when it comes to lag gravel mining than me. Who am I to bet against their opinions when the market is giving me a price which does not reflect said views at all?

The setup as I see it would not be present if the majority of people did NOT disagree with my views. It’s also worth remembering that most investors don’t beat an index in the long run. The most important thing is to think for yourself though. Since Novo is my largest position on top of being a banner sponsor I will of course be biased. Since I know this I try to flush out any (obscene) biases by forcing myself to write these articles where I explain my case as rationally as possible. It helps protect myself and hopefully others as well.

As of last week Novo controls the lion’s share, of all long hanging fruits, for each of the three major (lateral) systems. Now Novo might finally have the incentive to go straight for proof of concept for either and all systems since there might not be much prospective land left to grab on the cheap. No one had the foresight to stake the lion’s share of Witwatersrand early on and that is why the Witwatersrand gold fields were shared among thousands of operators. If one entity would want maximum potential and maximum risk/reward one would have staked the entire basin before it was obvious what it truly was. Just like how land over the great shale oil basins in the US went up exponentially in price AFTER proof of concept was show there…

There is no going back after proof of concept is shown and the prize is obvious so if you are going for the BIG win you better own all the land before that (potentially) happens: 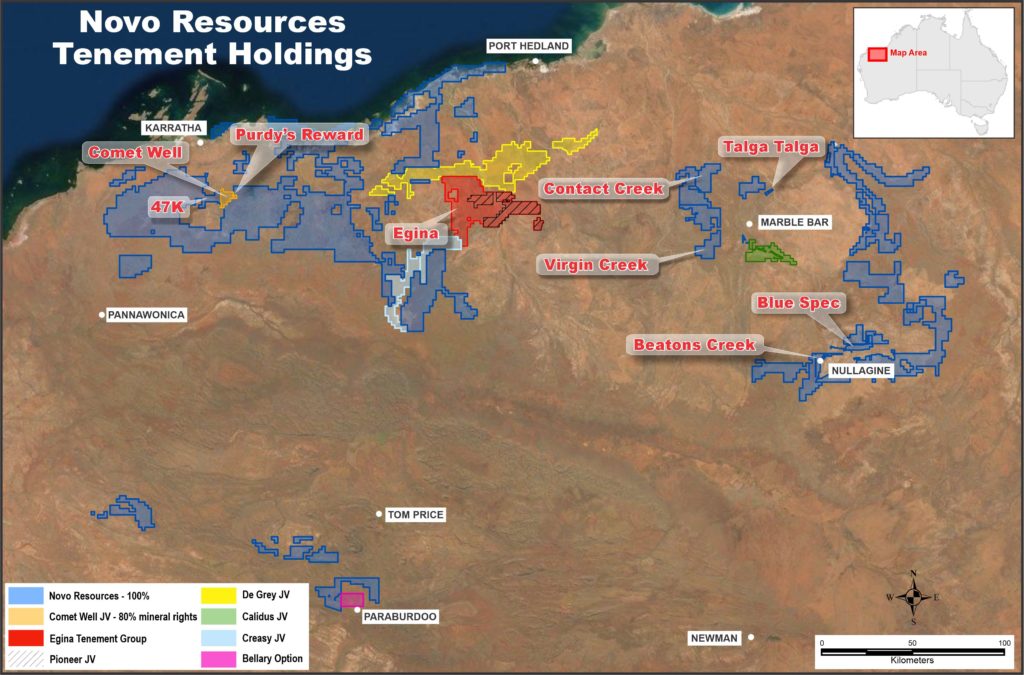 Waiting a few years for all the pieces to be in place is nothing compared to the value that would have been created if one or more of these systems are unlocked in Pilbara.

8 thoughts on “Novo: Risk vs Uncertainty”