What was the impact of finding one black swan?

The odds of finding another one went up immeasurably.

What was the impact of the first successful shale oil well?

What was the impact of the discovery of gold bearing “reefs” in the Witwatersrand Basin?

Witwatersrand became the most important gold production hub in the history of the world.

How would the value change for an option to own 100% of the gold right for the whole Witwatersrand Basin before and after the first gold bearing reef was found?

It would go up immeasurably.

How would the value change for an option to own 100% all prospective shale oil ground before and after the first economic shale oil operation were was a reality?

It would go up immeasurably.

When theory (never been proven) crosses the line to becoming reality (proven), everything changes.

How it Applies to Pilbara

The odds of finding more goes up immeasurably

The odds of finding more goes up immeasurably

What happened after Novo created a gold rush on their own in 2017?

Pretty much every Pilbara junior who owned some ground that contained some outcropping Mt Roe and/or Hardey Formation went out and explored the edges of said rock packages… And found GOLD.

So, it should by now be increasingly obvious that neither Comet Well, Beaton’s Creek or Egina are unique. The following slide contains the currently known gold bearing conglomerate prospects (at least the official ones). Also keep in mind that all the dots below are the result of very LIMITED exploration so far: 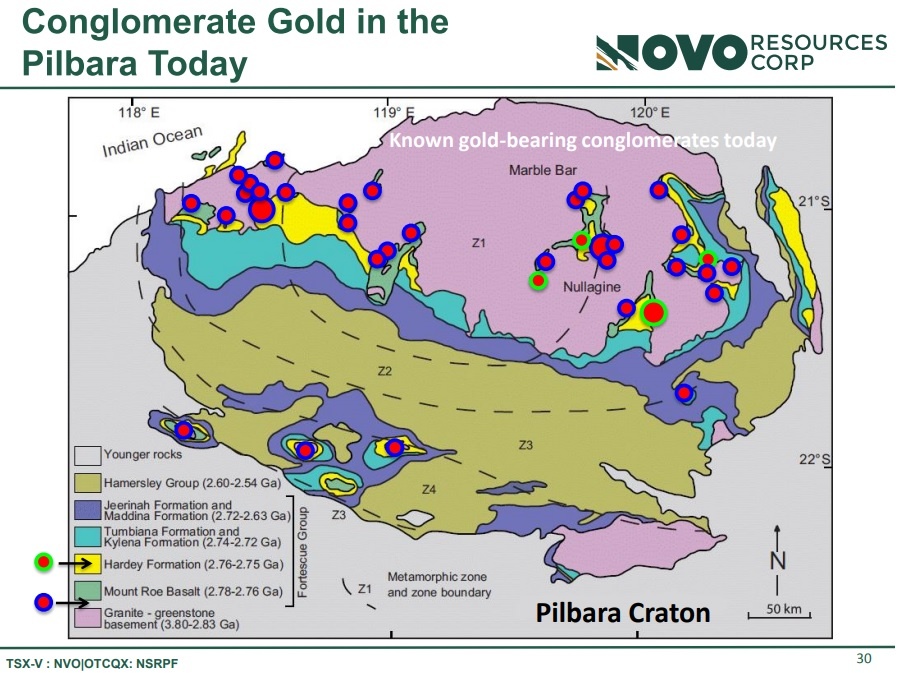 From this perspective, Novo’s actions, all the way from the start to the present, should become pretty obvious:

Quinton Hennigh made the decision to front run a world when theory had become reality. In other words: Quinton boldly staked as much potentially prospective ground as he could, BEFORE ANY further de-risking efforts were launched…

Because he understood the concept of outcome leverage. It would be impossible for a junior company to stake the lion’s share if a Wits-sized gold field was more than just theory. The prices would have been sky-high (as seen currently in the US shale areas according to Russel Clark). Just go back to 2017 when the hype was at its peak. Most Pilbara juniors who had some potentially prospective grounds shouted that fact from the roof tops and their market caps proceeded to go up by hundreds of percent.

The thing that I am certain that many people get wrong is that they think that the impact of any progress at Comet Well, Beaton’s Creek and Egina is limited to those projects. Nothing could be further from the truth.

Any success at each and every project will affect the Expected Value of Novo immensely. Each project is a gate to unlocking a 600×300 km basin which is already confirmed to have gold bearing Mt Roe and Hardey Formation conglomerates in each corner. Not only that but CRA drilled a deep hole 50 km south of the outcropping gold bearing conglomerates at Comet Well and hit gold in conglomerates. That was a blind hole drilled through 1.7 km of cover rock before hitting both gold in the Hardey Formation and also confirmed the presence of Mt Roe conglomerates (which we can assume might contain nuggety gold mineralization as seen at Comet Well).

Sure, I can see why the risk averse who wants to buy after the fact are waiting for PROOF OF CONCEPT. With that said, I don’t think they (or the market for that matter) is factoring in the inherent (outcome) leverage of that technical proof of concept:

With that said, any “technical” success at these projects does not only affect the inferred or implied value of the other known prospects, but obviously also affects the value of the so far unknown prospects. In fact, there is no mining project in the world that have outcome leverage anywhere close to any or all of the projects.

Thus, the first step was to find a “black swan” in Pilbara, which meant that there must be more black swans. The next and all important step is to prove that one black swan is worth something. Meaning that it can be economically mined. The ore sorting evaluation for example carries huge outcome leverage because Novo isn’t doing it just to see what the economic impact would be for Comet Well or Egina alone. No, it is an effort to deliver a new processing flow sheet which could be copy/pasted to all corners of Pilbara. If ore sorting works at Comet Well, there is a good chance that it will work for the 20+ prospects found on the slide which was presented earlier. All else equal, the implied value of all potential ounces found in similar geology would go up.

I cannot stress this enough: Any progress/de-risking at either Comet Well, Egina and/or Beaton’s Creek will at the same time de-risk all ounces found in the same geological setting to some degree. There is no gold junior in the world with similar outcome leverage. Quinton knows this very well, and again, is the reason why Novo staked everything in sight before proceeding to de-risk one prospect from each geological setting (1. Mt Roe, 2. Hardey Formation, 3. Egina lag gravels). In essence, I would say that most bears make the critical mistake of not seeing how every positive NR affects all potential ounces in Pilbara and not just the the current project(s).

I could go on and on why the implications of Beaton’s Creek (Hardey Formation conglomerates) getting a robust resource and mining permits stretches far beyond the project itself, but I think you get the picture.

Run. They don’t get the concept of outcome leverage.

Run. They don’t get the concept of outcome leverage.

When you hear people describe Novo as a one project case…

Run. They have absolutely no clue.

If one doesn’t understand the basics of Pilbara, everything will come as a surprise… Like why a giant like Sumitomo would be interested in an “alluvial gold patch”. From the bears perspective that doesn’t make sense… Well it doesn’t… From that perspective. It does however make sense when one connects the dots and realize that gold found in the Egina type gravels might not be local anomalies but rather snapshots of something much larger. Sumitomo didn’t get involved for what Pilbara currently is, but what the current data suggests it might become (what the current data suggests for the rest of the 12,000 km2). In other words, there are multiple forests that some does not see because of a few trees.

The market will either get this someday or be faced with the consequences. Novo will be testing the ore sorters at Comet Well and Egina in the future, and I hope that some will understand that any success will lead to shock waves that reach far beyond the Comet Well claim and the Egina mining lease.

If I could draw a parallel to poker it would go something like this: Lets say you are all in on three different tables (one table represents one of the gold bearing systems). If you win one hand at any table, you immediately get to play say 10 more hands, free of charge. What odds would you need for that first hand and what odds would you required on the other hands? What would you be willing to pay to play any of the first tree hands? Those are impossible questions to answer since no one can know the true odds, but at least I hope the thought experiment helps to appreciate the unique case of Pilbara…

The NPV (Enterprise Value) of any company should in theory reflect all potential future scenarios. Novo’s valuation should reflect those scenarios discounted for probability and time value of money. Every news release should also reflect the potential impact on all other prospects and the inferred value change on all potential ounces in the ground.

In contrast, if we use a one asset gold junior with a traditional hydrothermal prospect and a land package that does not cover much more than the targeted anomaly, then the example becomes much simpler. You have one hand at one table, but there are no add on affects in case you win it. Proving up the prospects does not have far reaching implications because a) No hydrothermal system is the same and b) You don’t own 13,000 km2 of similar type systems.

We often see the values of all companies in a given district go up after a discovery of some sort. For example: some areas in BC (Canada) after GT Gold and Garibaldi created big hype. Compare that to what the implications are of finding gold at Comet Well, which is part of a potential craton wide lag gravel deposit. Hydrothermal fluids can skip and need traps and good host rocks for example. An alluvial system does not skip, because that is how gravity works. If you find gold like CRA did 50 km from the nearest outcrop, do you think the gold jumped from whatever shoreline down to that place? No, and this is another reason why any success at any of Novo’s systems should have much higher impact than your regular district hype.

Novo staked over 12,000 km2 and are steaming towards proof of concept at Comet Well, Egina and Beaton’s Creek, which represents one prospects each from three different semi-basin wide to basin wide targets. Success at any and all projects has huge implications for Novo which stretches much farther than the projects themselves.

Majot Outcome Leverage #2: Proving that a prospect from each system can be economically mined

(Note: This is not investment advice and I am not a geologist. Always do your own due diligence. I own shares of Novo Resources which I have bought in the open market and am thus biased. Novo is set to become a sponsor in the not too distant future. )