Real Value Rotation And Lessons From The Past

At this moment, cash is king. It is outperforming stocks, (paper) gold, commodities and mining equities.

What we are seeing in the world economy is highly deflationary.

The thing is that neither the banking systems, economies, nor Central Banks can stand deflation.

Given the record amount of corporate, government and household debt in the world, the system cannot afford a global recession without completely crashing the world economy.

They all know this.

There is no way that they could ever allow system wide bankruptcies.

I believe cash will be king until the governments and central banks of the world either further inflates away the purchasing power of currencies or straight up devalues them.

During the crisis in Sweden in the nineties for example, there was a 30% devaluation of the Swedish Krona over night. Thus, people saw a 30% haircut on the purchasing power of their savings and the stock market rose 30% to account for the devalued Krona.

Again, cash is king until it is not.

If the governments and central banks can’t inflate the debt away, it will lead to a system collapse. If they are successful then we are probably looking at stagflation where cash and stocks should both outperform cash.

If they are not successful, then they will have to close the banks and markets for an extended period of time, and reboot the entire system.

Debt will be wiped in some way shape or form or the other and bond holders should lose close to everything they thought they had.

In the wake of the inflationary collapse of the Reichsmark in Germany, they re-booted the system and launched a new currency. The Deutsche Mark.

From talking to a guy who was born in Berlin during WW2 I came to learn that after everyone’s savings in Reichsmarks had been wiped out, every person received a fixed amount of Deutsche Mark, and a new currency system was born.

Another interesting thing I learned was that mortgages weren’t wiped out but instead re-calculated based on gold. What a person had in mortgage debt, priced in gold before the collapse of the Reichsmark, was the mortgage debt they would still carry over into the currency.

In other words it seems that:

If that is true, how would one come out as unscathed as possible on the other side if a similar scenario happens?

Well, debts wouldn’t be completely wiped out, but instead transferred over into the new currency. So borrowing to the hilt right now and hoping for a complete debt jubilee seems rather risky.

Putting everything in a bank account doesn’t seem like the best idea either given that it can be inflated away, devalued or used to bail in the banks. Either way, it should lose in purchasing power once we are on the other side of the storm.

The actual currency transformation was a bit more complicated but I think the points above are close enough. Here is the description from Wikipedia:

“The Deutsche Mark was officially introduced on Sunday, June 20, 1948 by Ludwig Erhard. The old Reichsmark and Rentenmark were exchanged for the new currency at a rate of DM 1 = RM 1 for the essential currency such as wages, payment of rents etc., and DM 1 = RM 10 for the remainder in private non-bank credit balances, with half frozen.[clarification needed] Large amounts were exchanged for RM 10 to 65 Pfennig. In addition, each person received a per capita allowance of DM 60 in two parts, the first being DM 40 and the second DM 20.[6]”

Anyway, the heart of the matter is that tangible assets were king. If you owned an ounce of gold, you would still own an ounce of gold even though the currency collapsed. If you owned a house you will still own a house. If you had a mortgage however it is my understanding that it was carried over into the new currency (again, based on the pre-collapse value of the mortgage valued in gold).

The only way for cash to be king during and after a crisis is if the governments and Central Banks would stay put and do nothing, and just let another Great Depression happen. I find that slim to none given the fact that most money is digital and in the custody of the banks, who would go bankrupt. Thus, the only way for cash to end up king in practice would be if one converted digital cash into physical cash and hoarded it under the mattress. Again, this seems to be a highly unlikely scenario given that money printing is as popular as ever. Pensions would of course be wiped out as well and the amount of cries of pain would be too loud for any wannabe career politician to ignore.

When the markets starts to understand that the currencies will either be inflated away or devalued, then I would expect a flight from cash into stocks, gold and pretty much anything tangible. One would rather own a piece of a business than own something that is readily losing purchasing power.

If this is the start of a global recession and debt implosion then one should assume that regardless if we get high inflation, devaluations, a deflationary collapse and/or a monetary reset, then digital cash, pensions and bonds will come out as as losers in the end.

The things that should make it out with the highest purchasing power, relatively speaking, should be basic materials/tangible assets.

Anyone would need to be fed, clothed and have their house heated so all companies in those sectors couldn’t go under unless the world ended. It won’t.

Gold and silver should go up in relative purchasing power as well since it’s the most basic form of money and store of wealth. Indians will still love gold and silver after a monetary reset for example.

Right now we are seeing cash being king as stated earlier. Asset prices are devaluing versus the currencies and bonds.

Today Central Banks around the world announced the firing of a cooperative round of liquidity, while many also lowered rates to boot.

If this doesn’t work, they will probably soon start thinking about “helicopter money”. In other words; They might soon send cash to its citizens.

They will probably push harder and harder to get inflation going and might very well risk bringing on hyper inflation down the line.

Deficits should soon start to balloon and if rates starts climbing higher in light of these deficit hikes (or inflationary pressure), then it might lead to a collapse in confidence in terms of the solvency of nation states.

This seems to be the typical event that precedes a rush into stocks and other tangible assets such as gold.

In other words, this would be when cash went from being king to being trash.

If the above doesn’t happen, at least not in time, then they will probably just shut everything down and we will see a monetary reset.

Either way I think that the most probable end game scenarios all lead to stocks and particularly gold being kings when all is said and done.

In that case, cash/bonds would have been dethroned as king and will end up as trash.

Visualization of where I think we are and where we are headed: 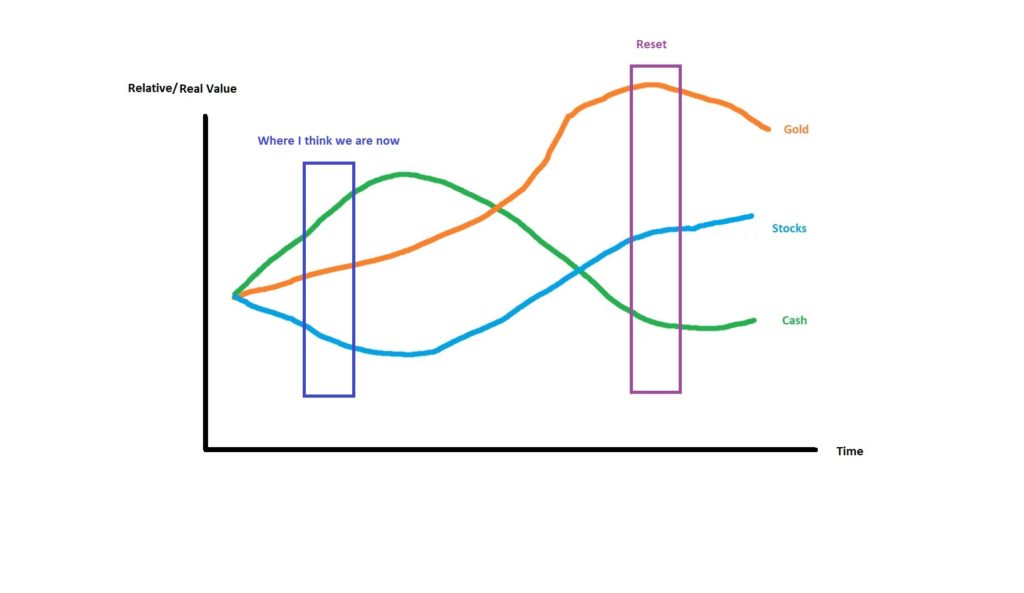 Deflationary collapse into a system reset = Gold should win, in the end

Ps. As we head closer to a potential bank holiday/reset, the higher I value the “haves” versus the “potentially haves”. Meaning I’d value companies with banked assets relatively higher than companies with potential assets.

NOTE! THIS IS HIGHLY SPECULATIVE AND SHOULD NOT BE SEEN AS INVESTING ADVICE!