The Simple Case For Gold: Betting Against a World First in History

Everyone is aware that gold and the miners have been in a correction since early August of last year. Sentiment is unsurprisingly extremely bad. In fact, according to SentimentTrader’s index, the pessimism in GDX (large miners) recently hit the third lowest level in ten years: 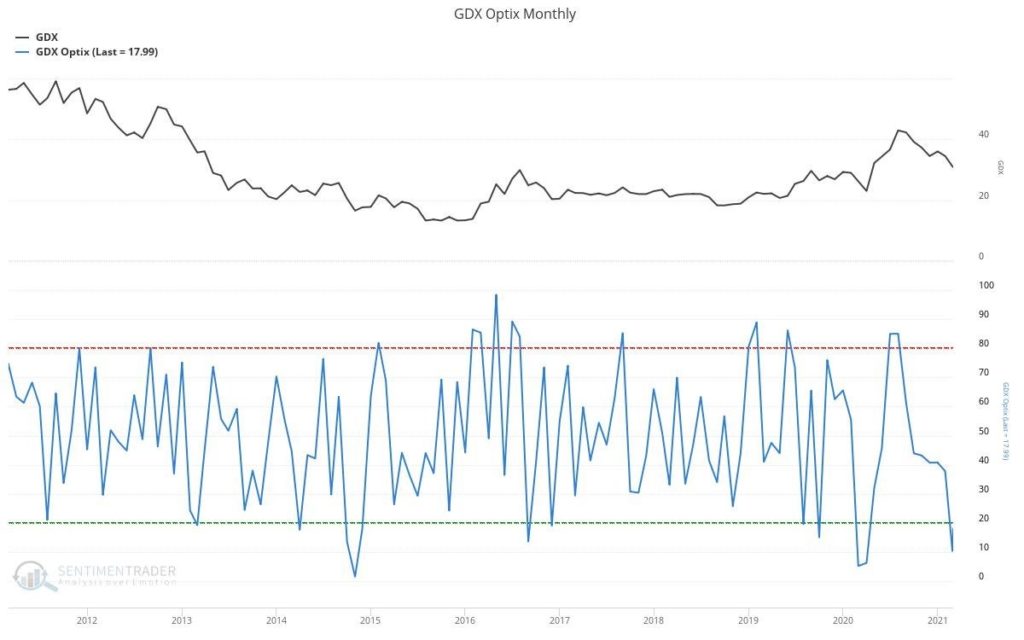 I don’t know what the sentiment index looks like for gold but given the amount of pessimism I am seeing on twitter I assume it is really really bad. What makes it even worse for gold investors is of course that most other asset classes have been ripping with some hitting fresh ATHs. Most commodities, except for gold and silver, are actually making new multi year highs. Then add on the Bitcoin (crypto) mania with bullions banks, the FED, MSM and some prominent traders/investors basically proclaiming the death of gold. In other words it has been a perfect storm of negativity and a feeling of “missing out” coupled with ridicule primarily from Bitcoin maximalists. Some call gold investors “stubborn” and “dinosaurs” because we refuse to let go of a “relic” that is supposedly outdated in the New Crypto World Order which leads to some interesting questions…

Have we ever seen a global environment where gold and silver makes more sense to own than now?

I don’t think so since this is the first world spanning FIAT blow out in history. Literally all of the large economies are printing currency like crazy and debt has been skyrocketing across the board. In other words there has probably never been a time that hard assets, especially physical precious metals, have made more sense. Many investors today have never experienced, or at least remembers, a time rising rates or inflation (let alone hyperinflation). In contrast I didn’t think I would see a day where money is literally helicoptered out to people in the United States (Probably because I have never seen that ever before). In other words the “crazy bar” is just stair stepping higher in order to keep this farce of a financial system together. Before 2008 most people would probably never dream of QE infinity and negative rates. But when those Rubicons were crossed it is now perfectly clear in hind sight that the supposedly short term crisis management tools have become standard procedure. Furthermore the FED and other Central Banks have grown increasingly ready to expand said tools, and even employ said tools in new areas, in response to smaller and smaller “hiccups”. It is beyond clear that no one will leave the roach motel and the financial engineering and money printing will only accelerate from here on out. The alternative, which is to let the markets be markets, would undoubtedly lead to imminent collapse. This also means that the canaries in the coal mine, which are gold and silver, must be silenced as much as possible…

Should one be surprised that the FED, Bllion Banks and MSM are hyping Bitcoin while bashing gold? I mean I don’t even remember the last time I saw a comment about gold from a FED official other than this recent one:

BULLARD SAYS BITCOIN CAN BE CHARACTERIZED AS A RIVAL TO GOLD

… So basically the only time in recent memory I see a comment from a FED official about gold is when Bitcoin is used to downplay the role of gold? Priceless and speaks volumes in my opinion. Gold has been in backwardation recently and it’s been hard to get any (retail) silver whatsoever in the wake of the #SilverSqueeze. Furthermore “standing for delivery” numbers at COMEX have been abnormally high as well. In light of all this I think a snippet like that from a FED official fits with the ole saying of “There’s no smoke without fire”…

Anyway, I guess what I am trying to say is that a) Gold and Silver make more sense now than ever in history and b) There seems to be trouble in paradise in regards to the physical market.

Why The Risk/Reward Calculation For Gold And Silver Trumps Everything

Why do I think physical gold and silver makes more sense than ever and are waaaaay better bets than Bitcoin or any other crypto?

If gold and silver DOES what they have ALWAYS done for THOUSANDS of years then they should give the highest increases in purchasing power ever seen given that we are seeing the biggest global bubble ever seen. In other words I just need this to NOT be the FIRST TIME EVER in modern history that gold and silver DO NOT preserve wealth as they have done EVERY TIME since time immemorial…

What does a bet on Bitcoin over Gold really mean if we are talking about what the Bitcoin maximalists are betting on?..

(You know the; “Gold is dead”, “Gold will prove to be fools gold”, “Bitcoin will be the next world reserve currency” and “Bitcoin is a superior store of value than gold”)

… Well for this particular bet to pay off it would mean that:

For the first time in recorded history something will overtake physical gold as the store of value above all others.

Yes, we are talking about a bet that has failed every single time over thousands of years… But this time… This time in the year 2021 or whatever this bet will finally be a winner?

Have you heard the “fool me once shame on you. Fool me twice shame on me”?

How about humanity being fooled thousands of times, over thousands of years, across thousands of civilizations, that gold and silver were not the premium stores of value…

How irrational would it be to take a bet like that…?

And especially at THIS point in time when the certainty of owning something that WILL INDEED BE A STORE OF VALUE would be more important than ever in the history of finance.

…Famous last words of every anti gold bettor during the final stages of a monetary system.

Case in point, in 2004 when gold was trading at around  $400 per ounce, one could see this stuff in the papers: 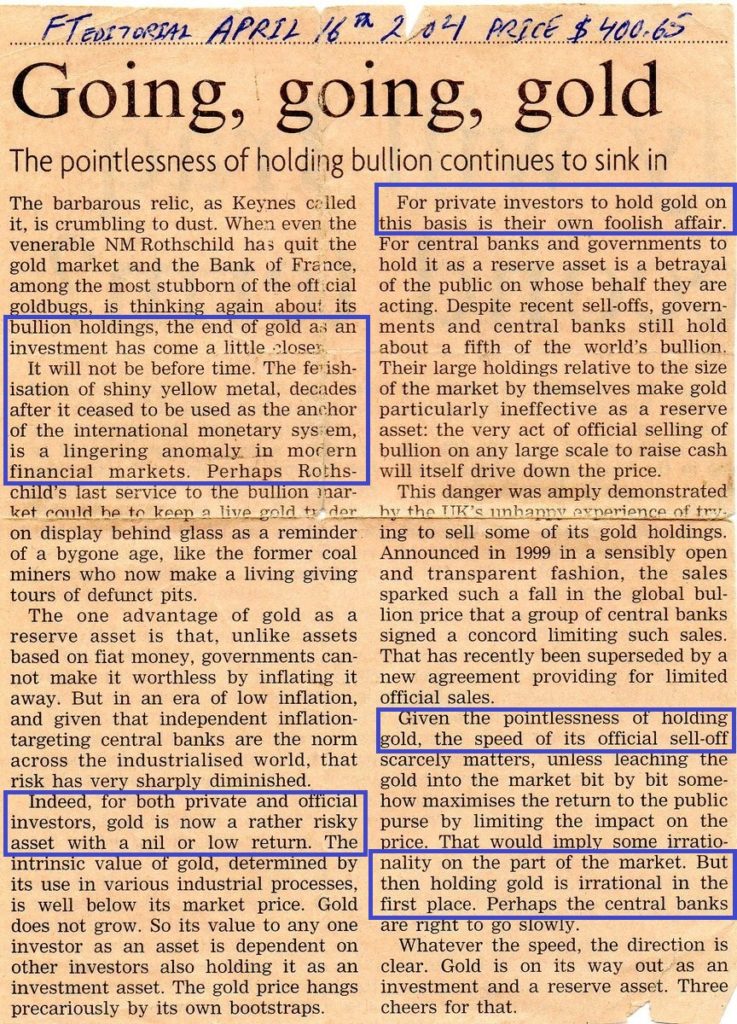 … Well gold didn’t die this time around either and that article was published not long before gold really started to accelerate higher actually. As it stands now I think the current chart is quite similar to what happened in 2008 when gold first hit a new All Time High, then corrected sharply during the global financial crisis, and then proceeded to rocket higher into the year 2011. If history repeats we would see cold retreat from the new All Time High set in August of last year and then retrace to around the 0.382 Fibonacci retracement level before turning and accelerating higher. We are around that level currently and time wise the correction is almost on par with the 2008 correction: 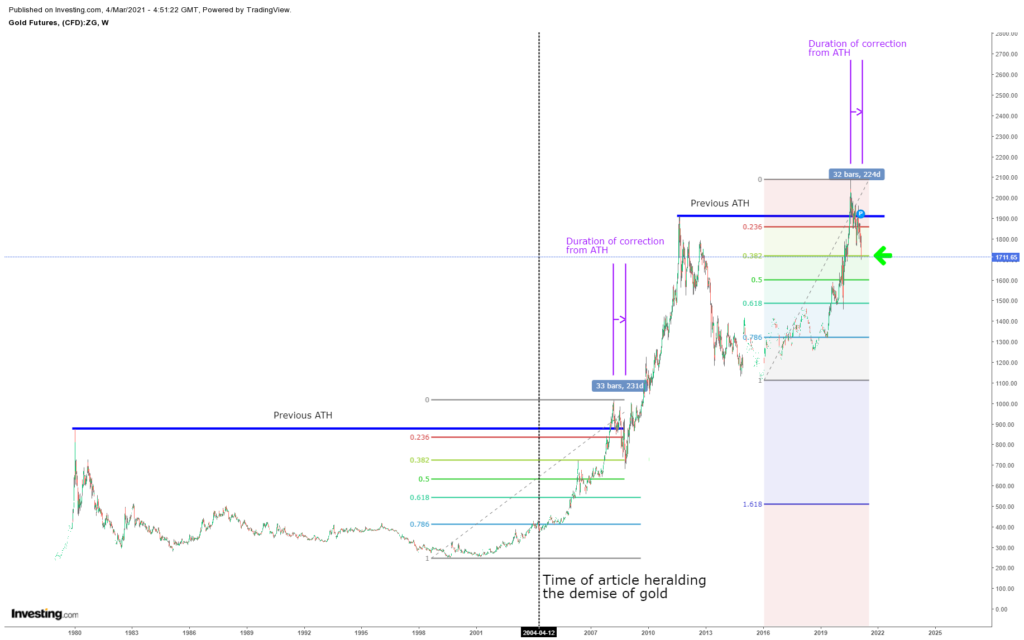 As an ex poker player nothing makes more sense to me than gold and silver from a risk/reward perspective (well maybe the miners that mine this stuff if we are talking just sheer R/R). I would also say that I simply need this to not be the first time ever in history that gold and silver fails and I should see my purchasing power go up substantially over the coming years and that might be the safest bet a human can ever make (except betting on death and taxes). I find it fascinating that the bet that has always worked is, again, considered to be a contrarian bet (Do we never learn?). Oh and if we’re talking R/R with a heavy emphasis on the RISK aspect of the equation then Gold blows Bitcoin away by miles since you know gold will always have value while Bitcoin has been around for around 13 years. And if we factor in all the potential fatal flaws of Bitcoin (internet, power, power consumption, infrastructure needed etc) then the comparison gets beyond silly.

Gold  has NEVER lost a war against paper

Pro Bitcoin: Betting on a world first in history

Pro Gold: Making a bet that has delivered every time over thousands of years

… In a time where one wants to be more sure than ever that whatever one bets on as a “store of value” will prove to be the right bet. Food for thought.

Note: This is not investment advice.

9 thoughts on “The Simple Case For Gold: Betting Against a World First in History”