District Metals (DMX.V) just announced a $3 M Private Placement (I will be participating again) and in this article I will cover my recent site visit as well as my current view of the case…

I will begin this article with some of my impressions from the site visit:

First of all it was a treat to watch Rodney Allen’s presentation and be able to talk to him about Bergslagen, Sweden (Trivia: Rodney has been in Sweden for so long that his English has a slight Swedish accent) and mining overall. I already knew he was considered THE guy when it comes to the geology of Bergslagen but I think you really have to spend some time with him in order to fully appreciate his mind. In terms of human capital I have no idea of how to calculate how much value a guy like that brings to a story like this. All I can say is that I think he alone probably adds millions or tens of millions in Expected Value as it relates to the three projects under District Metal’s control. Basically every person I talked to said they thought Rodney is brilliant. Hein Raat, the country manager, is also an impressive value add that does not show up on the balance sheet. Not only is he sharp but he speaks Swedish and seems to get along very well with the locals. This is a big deal and often something I usually overlook since it’s so hard to evaluate local relationships for juniors with projects half way around the world. To have a brilliant geologist who speaks Swedish and is good with people is definitely a big value add. Then we have Garrett Ainsworth the CEO. This was the first time meeting him as well in real life and I can say that he is a genuine guy. He is exactly n real life as he is when he is on Zoom calls and interviews. Humble, sharp and very driven. Like any good CEO he has obviously been able to amass and surround himself with the best people possible in order to have the best chance of creating value…

To sum up I think the team adds a lot of the Expected Value to District Metals and the current valuation does not reflect this in my opinion. If these projects were in the hands of the “average junior mining team” the case would be totally different in my opinion. I think it is a testament to have much I like the junior sector right now that you can buy this kind of people with these kinds of projects for around C$20 M.

As is typical with junior miners the share prices of companies often oscillates widely and often appear disconnected with fundamentals (Especially during a correction coupled with tax loss silly season). District Metals is a perfect example of this in my opinion. Shares of District hit a high of $0.59/share in early 2021 and are now trading at $0.225/share at the time of writing. On surface one could think that the story has not played out like investors were hoping but I would argue that the fundamental trend has clearly diverged from the recent share price trend due to the following reasons:

From a micro perspective it looks good with the company having hit the widest Massive Sulfides intercepts ever at Tomtebo. From a macro perspective it looks good with added blue sky potential via the pick up of two additional promising projects. Then we also have the company swinging for the fences by drilling untouched anomalies away from Tomtebo.

Personally I think there are four factors at work that has led to District Metals being “artificially” undervalued currently:

As an investor/speculator I think a big part of the job is to look farther ahead than the market and front run primarily sentiment changes. So I ask myself: “If these forces are working against me right now, by putting pressure on the stock, what might it look like in 6 months?”. Lets imagine an environment where we are a) Out of tax loss selling season, b) More results are out and the company is cashed up again, and c) Junior miners are finally in an uptrend that leads to a positive spiral (Higher prices -> better sentiment -> higher prices etc). Can I see myself owning higher valued shares of District Metals in that scenario compared to today? Yes. I think District is currently quite undervalued and that seasonality, tax planning and sentiment together is pushing the beach ball deep underwater currently.

I mean a MCAP of ~C$20 M for three de-risked VMS projects in one of the most influential mining districts in the world in a first world country. I think there should be a lot more actual red flags than there is for this valuation to not be cheap. Personally I don’t think Garrett would get out of bed in the morning if he thought the current valuation was a fair assessment of the Expected Value. 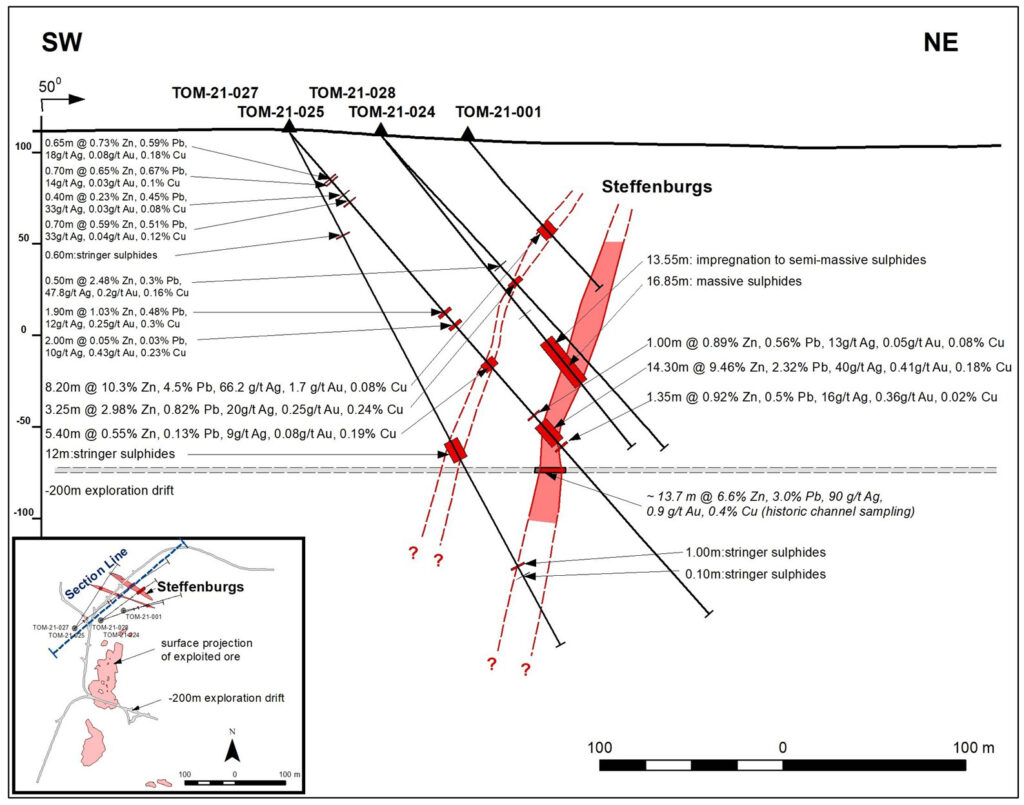 “…The down-plunge extent of the massive sulphide is open.

Like all rocks in the Tomtebo area, the massive sulphide lens has been stretched and folded by subsequent tectonic deformation. Each drill hole we put down in the Steffenburgs area provides more evidence of the shape and extent of this deformed massive sulphide body. From the data assembled so far, we interpret that the massive sulphide lens has been stretched into an elongate shape with a moderate to steep plunge to the north. The lens is directly adjacent to, and probably in part within, the “nose” or “closure” of a tight fold and consequently the shape of the lens is not expected to be a simple disk or ellipse. Current evidence suggests that the lens is narrow near surface but widens with depth.”

“Our drill assay results associated with visually strong sulphide mineralization encountered in holes TOM21-024 and -025 are even better than anticipated, and the high grade polymetallic lenses currently being delineated at the Steffenburgs zone are impressive. Hole -025 is an aggressive 118 m step out down plunge from hole -001 where down-hole electromagnetic surveys and whole rock geochemistry will provide important inputs to our 3D model that will assist with continuing to step out aggressively at depth.”

Here is Garret talking about the first drill holes from Phase 2 with Proactive:

Garret also did a 10 min interview with Kereport on Nov 24 which can be ACCESSED HERE.

So District has recently hit the “widest interval of massive sulphide mienralization on the Tomtebo Property to date”. In other words the things are looking increasingly good as the company continues to drill around the core of the historic Tomtebo workings. Lets just say that Tomtebo is wide open and I expect there to be a lot more mineralization found around the currently known zones.

The deposits in this area of Bergslagen can be very large as evidenced by the very large lenses found at the world class Garpenberg mine so I would suggest that balance of probabilities would indeed dictate that there is a lot of room for growth from Tomtebo alone: 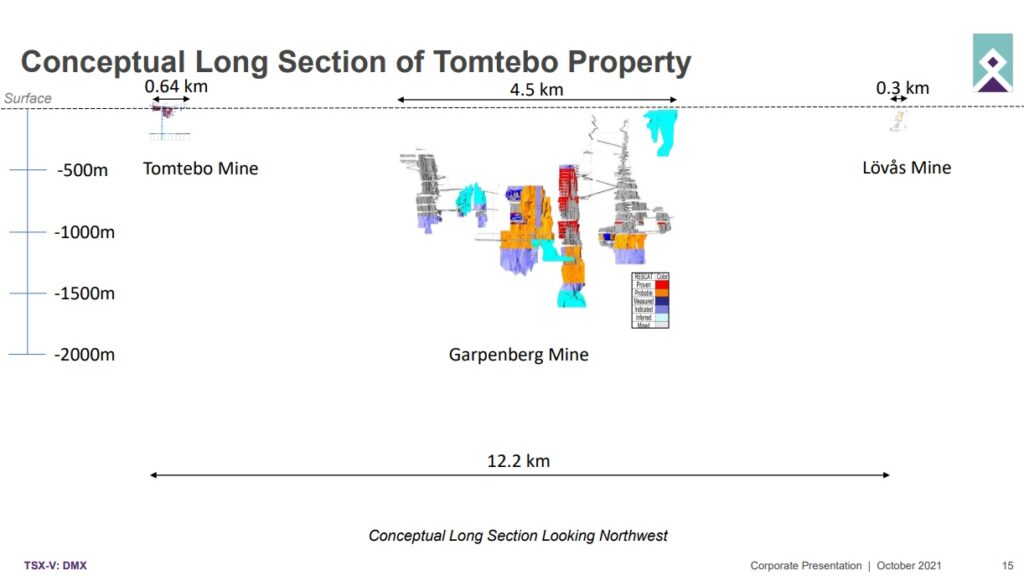 … Not that the slide above will for sure be riddled with VMS deposits belonging to District Metals but the more important thing is that I don’t even think the current version of Tomtebo is even priced in… So I don’t really think I am paying a dime for any potential here… And I like free stuff.

The Svärdsjö (“The Sword Lake” in Swedish) and the Gruvberget (“The Mine Mountain” in Swedish) projects are not some random moose pastures but rather somewhat derisked with both properties having seen historic mining. It’s worth noting that I don’t think any value (aka zero chance of success) for either project is baked into the current valuation.

The Gruvberget property even has a historic resource and what I would think is typical polymetallic mineralization seen elsewhere in the world class Bergslagen district: 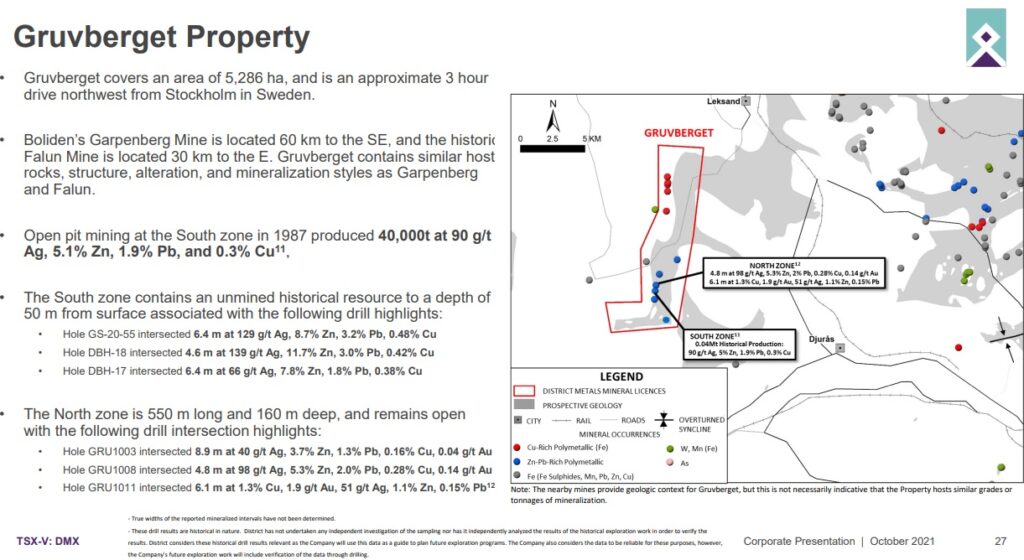 The property has seen some good hits at good widths and as I described in an earlier piece, Boliden used a US$32/tonne cut off grade for underground mining at Garpenberg according to their resource estimate in 2020. With Zinc at around US$1.5/lb currently that translates to a zinc equivalent cut off grade of less than 1%. Even if one assumes that inflation might have hiked that up it still is a mind numbingly low number and just goes to show how extremely profitable a mine of this type can be in Bergslagen…

So should SOME value be attributed to Gruvberget? I think that is a no brainer YES.

The Svärdsjö project has also been the host of several historic mines and was recently worked on my none other than Boliden: 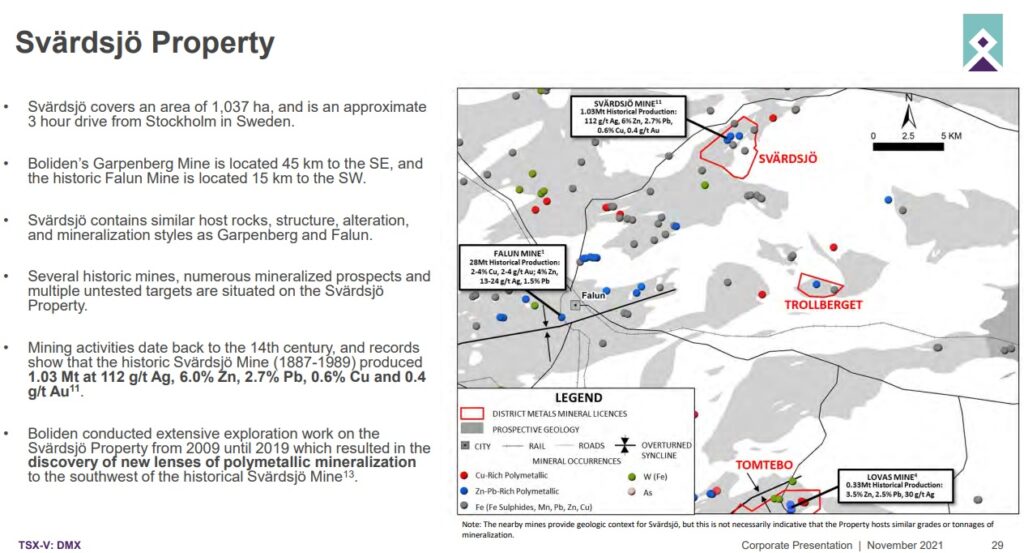 The historic “Svärdsjö Mine” had some stellar grades that worked over a 100 years ago and would probably be obscenely economic today.

District Metals is one of the cheapest juniors out there in my opinion. The people coupled with the projects and jurisdiction of said projects makes me scratch my head when I see the valuation. District is of course not a unique case in that sense given that the whole sector is undervalued but there are not too many $20 M juniors around with so much going for them. They have the best geologist for the type of geology they are working on and the CEO has had big successes in his past. Furthermore insiders have been pretty steady buyers over the last year while already having some good skin in the game.

This is a tier #1 junior explorer as far as I am concerned.

What I also REALLY like about District Metals is the fact that mines in this area have proven to be extremely low cost operations. Remember, ounces in the ground are only valuable due to the potential of recovering them economically, and Boliden has shown that even low grades can be very economically mined in Bergslagen. Thus the value per ounce should be relatively high here, all else equal, and the critical threshold for success ought to be lower than for most juniors.

I really do feel that the Value and Price does not line up at all and I suspect it might have a lot to do with a) Sweden being relatively unknown as a mining jurisdiction for many investors and/or b) The perception of Sweden as a mining jurisdiction being bad. To that I would only say that a lot of stuff can happen before Tomtebo, Svärdsjö and/or Gruvberget would be a mine anyway. The world’s miners are not keeping up with demand right now and we will need a lot more metals in the future.

… I at least think the upside potential is obvious and the fact that so little success is priced in is the main selling point in my opinion. If every projects turns to shit then I lose money. If they prove up a relatively decent deposit at any project I expect to make a lot of money. Time will tell and I am patient whilst I like the current fundamental trend a lot.

Note: This is not investing or trading advice. I own shares of District Metals and the company is a banner sponsor. Always do your own due diligence and make up your own mind. Junior miners are very risky so do not invest money you cannot afford to lose.