Most juniors just seem to drill for drilling’s sake. In other words, most management teams work to get a salary and it doesn’t matter that much if their project(s) will ever become a business. I think Irving is one of few juniors that actually have the business side of things at the forefront. The “business model” has been highlighted in the company’s presentation since day one and the projects were picked with this in mind. Thus, Irving has chosen to acquire Low Sulfidation Epithermal systems which which have silica rich rocks that also have a low amount of deleterious elements. This is important because it makes the ore suitable as smelter flux. That is of course not enough since such an operation would also need to have good infrastructure that is close to both a port and the actual smelters which would buy and process the ore. Thankfully, this is also in place since Irving’s projects are located in Japan which have numerous smelters across the country together with good infrastructure and a countless ports (The country is made up of multiple islands after all). Lastly, Irving has also kept the “green culture” of Japan in mind, since the company has chosen projects that are located in rural areas where population density is low in order to further increase the chance of success. There is no doubt in my mind that the rigorous project screening process that has been in place from day one is a big reason why Irving is having such fast paced success.

Everything I just stated above points towards a company that has actual value creation on the top of the list and certainly before just wanting to have a salary (which is exactly what a shareholder would want to see).

Now on to some comments from Quinton via Wisguy1 out of CEO.CA:

Silica with gold and silver

Irving Resources business model involves shipping and selling smelter flux to the Japanese smelters and while doing so the company will also be getting paid for 90-95% of the value of all precious metal content found in the smelter flux material. As far as I understand the smelter flux should fetch a price between $50-$100 per tonne which approximately translates to ore with a grade of 1-2 gpt AuEQ. Again, this is just from the actual silica which is used as smelter flux. Then add on the fact that there would be no need to build a mill which is both costly and would require a lot of time and effort to get done.

Think about this statement from a previous news release out of Irving:

“As a first test of the CSAMT anomaly discussed above, Irving recently completed deep diamond drill hole 19OMI-010. This hole was oriented south at an inclination of 60 degrees and drilled to approximately 584 m. This hole encountered silicified volcanic rocks over its entire length.” 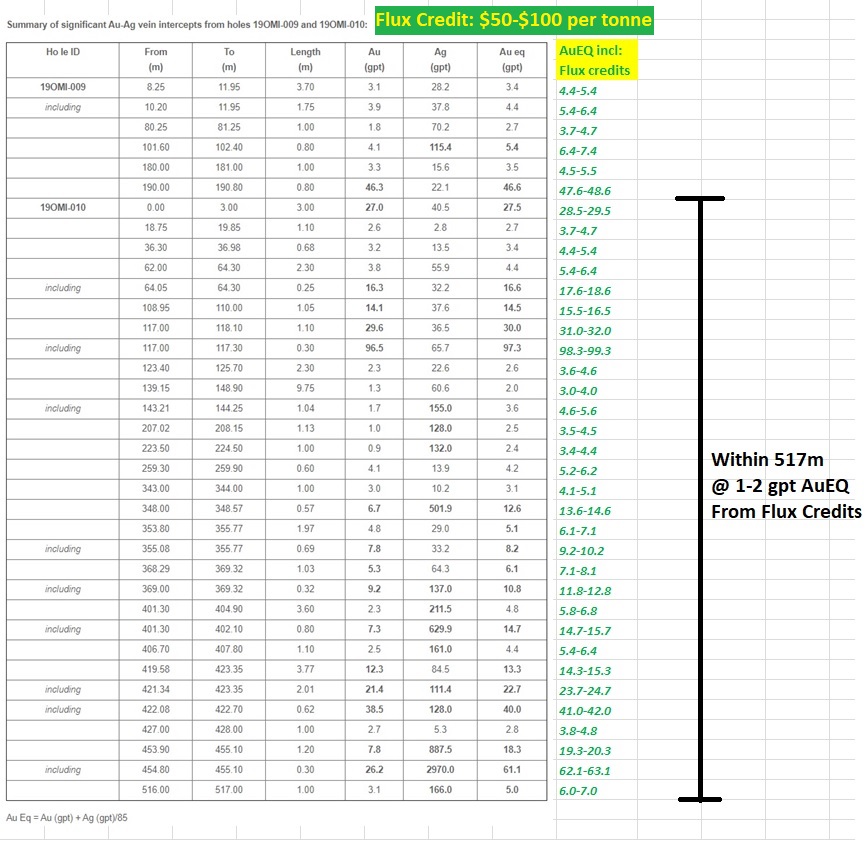 Now I don’t expect Omui (or any of the targets within Omu) to be open pit mined for smelter flux material but the table above was meant to show that the actual rock value at Omui is much more than meets the eye (if one does not account for what the actual business model is). It is also safe to say that this is not lost on the largest gold producer in the world however since it was just announced that Newmont Goldcorp increased its stake in Irving Resources. Keep in mind that an entity such as Newmont Goldcorp would need a project worth billions to move the needle and seeing them double down on Irving is major development that I think has yet to be discounted by the market given the lack of reaction so far.

Depending on actual cost to mine there is a possibility that there might be very little waste material while mining since anything and everything recovered might have an inherent smelter flux base value that translates to around 1-2 gpt Au equivalent. No junior that I know of has a deposit with peripheral rock values such as that outside of the actual “ore”. To say that Irving Resources and it’s business model is rather unique in this space would be an understatement in my opinion and it wouldn’t even be possible if not a lot of things came together such as; a) Location, b) infrastructure and c) system and ore characteristics to name a few.

The system(s) within the greater Omu property looks huge and so far it looks like there is potential for at least three major flux/precious metal mines at Omui, Omu Sinter and Hokuryu. It’s also worth keeping in mind that there is no chance that the good drill results out of Omui and Omu Sinter so far will be neither the best nor the worst that will come out of these targets and that Hishikari and Konami were mined for decades. Hishikari is still being mined with somewhere around 70 years left of reserves and is producing gold at AISC of around US$300-$US400 per ounce. It’s not hard to realize that given Hishikari’s life of mine and cost structure translates into a business that would have been worth many billions of dollars when all is said and done. Finding even one of these types of deposits is a major prize, which is of course not missed by Newmont Goldcorp and Sumitomo Corporation.

… On that note, Quinton stated the following in the Kereport interview:

In other words there might be a host of major players that will want to be the owner of the next big “flux mine(s)” in Japan and there are some big Japanese entities out there such as Sumitomo Metals & Mining and JX Nippon Mining & Metals to name a few. I personally would not be sad to see a bidding war between multiple major players down the line since that is the very recipe for an over-sized pay day. Hopefully it might even result in a few alliances forming, in order to increase the buying power, to then go head to head with each other. Note that this is very forward looking although there are clear signs that Irving is looking better and better in the eyes of at least THE Major.

A lot of people have been saying that Irving has been overvalued all the way from sub $1 up until today. I can understand that stance if one just took a superficial look on Irving. I mean lets face it, most juniors will never find anything of value, let alone something of high quality. The only way for any precious metal in the ground to actually be valuable is if could turn into a cash flowing business. Most juniors have either little to no gold, poor quality project(s), lack of infrastructure and/or any other problem which makes a profitable business very unlikely. In contrast, Irving thankfully seems to have grabbed a few seemingly very large “hybrid” deposits by their tails, which could result in anomalously good mining ventures. And given the fact that there is a mining lease in place at Omui we will likely see some form of revenue quicker than most juniors could only dream of.

Lastly: Newmont gets it. Sumitomo Gets it. All the major Japanese mining houses gets it… The overall retail market still does not seem to get it… 😉

(Note: This is not a buy or sell recommendation. This is not investment advice and I am not a geologist. Always do your own due diligence.  I own a lot of shares of Irving Resources which I have bought in the open market and am thus biased.)