Ophir Gold Corp (OPHR.V) is a junior explorer focused on the Breccia Gold Project which is located in Idaho, USA. I own shares of the company and I have brought on the company as a banner sponsor. I will explain my reasoning for it in this article…

My case for Ophir Gold is simple:

At face value the miniscule Enterprise Value of ~C$7.6 M would suggest that this is a it’s a grassroot exploration, high risk/high reward drill story. However, the Breccia Gold Project is not really grassroots since there was a Historic Resource that estimated a gold endowment of 690,000-700,000 ounces. In other words we can be pretty sure that these is in fact a lot of gold under the surface. Whereas a typical grassroot exploration maiden drill campaign might have a sub 5% chance, of hitting a potentially economic intercept, I would argue that drill success for Ophir Gold is actually very likely. It is from this perspective that the risk/reward gets very attractive in my opinion…

Lets say that there is a 70% chance of there being at least 700,000 ounces in the ground. What would that be worth? I don’t know. What if there is a relatively good chance that it might be quite a bit larger than that? What should the current Enterprise Value be in order to “fairly” reflect these scenarios? I don’t know. All I know is that C$9 M (minus cash) is not much if we are talking about something that basically is a decent discovery already (albeit historic in nature). Furthermore, there is ample evidence that the system has far longer strike length that what was used in the resource and there is more potential at depth to boot. Who knows, maybe the historic drilling and resource targeted the upper parts of a Low Sulfidation Epithermal (LSE) system and that it will actually get better at depth?

Anyway you slice it this looks like a “no brainer” from a Risk/Reward perspective. Not that it’s a guaranteed multi-bagger but that it’s so cheap relative to what is likely already there that I don’t see how I could possibly be overpaying for the stock. Remember, the cheaper something is the less likely it is by default that one is making a mistake (buying something overvalued).

Cases like this is why I personally think that it’s easier to consistently make good returns when the market is NOT in a full fledged bull market. I mean think about it. If everyone and their mother were buying every junior company out there how likely is it to keep finding undervalued cases where the risks are overwhelmingly to the upside? What I am trying to say is that you should be careful what you wish for. In a full blown bull market everything goes up and it feels great in the moment. However if at one point in time everything is fair- or over-valued then the expected return on any new capital deployed might be neutral or negative. In other words all the opportunities are gone. In contrast we are now in a luke warm market where there are still a lot of opportunities out there where I think the Expected Value is very positive on any dollar invested.

I am not knee deep in Ophir Gold but the Risk/Reward is very much convincing enough that I believe it is truly a “no brainer” to include it in my diversified portfolio. In a “hot” junior mining sector I don’t expect to see cases like this around which is another reason why I think one should welcome poor sector sentiment. When the sector is hot then the bargains are gone and the ROI on invested dollars goes down.

Lets Look at Some Slides

Investment Highlights according to the company:

I think the slide above sums it up. The only thing I can think of which explains the abysmal valuation is that it is in Idaho and for some reason Idaho has sort of a bad rep. But there are mines operating in Idaho and I personally think the companies working there should not be valued like they are working in an unstable country somewhere in Africa. In other words I think this is irrational market bias in play (which helps create the opportunity). According to the “Fraser Institute Annual Survey of Mining Companies 2020” Idaho is ranked as #9 in the whole world in the “Investment Attractiveness Index” category (and #4 in the US). What is perhaps even more surprising is that Idaho actually ranked #1 in the world in the “Policy Perception Index”. Given that a decently sized, high-grade LSE deposit could be worth several hundred millions from an economic stand point one has to wonder just how (potentially) overly discounted Ophir could be at the moment. 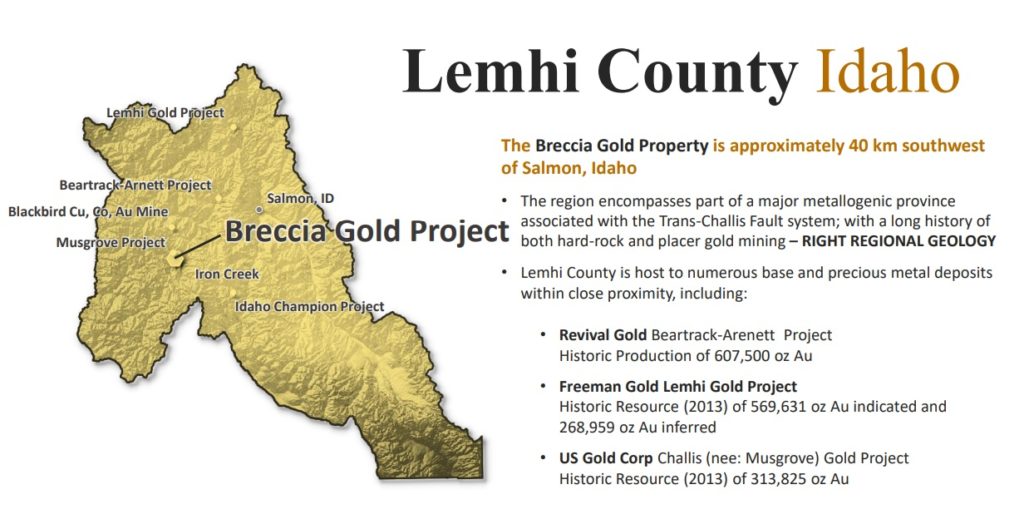 As stated earlier the Breccia Gold Property is located in Idaho, USA. More specifically it is located in Lemhi County. Ophir Gold is not the only junior operating here as can be seen in the slide above. Revival Gold is for example advancing its Beartrack-Arenett Project which was the largest past-producing gold mine in the state. Idaho Champion, which is another holding of mine, is present as well. It really seems like most Idaho focused juniors are cheap or even dirt cheap and I do suspect that the market might not be totally rational since the valuations makes it seem like these juniors are located in some third world country. 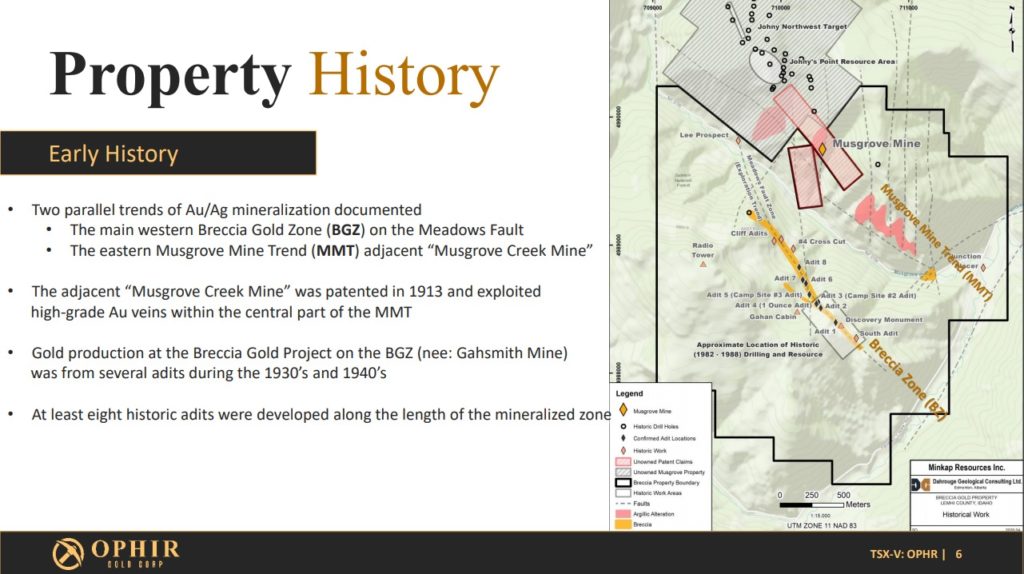 To say that this is relatively low risk exploration is putting it mildly. The property has seen gold production in the past and there is a lot of “smoke”. The best part, which greatly reduces the risk, is the fact that there has been a lot of historic sampling as well as a historic resource: 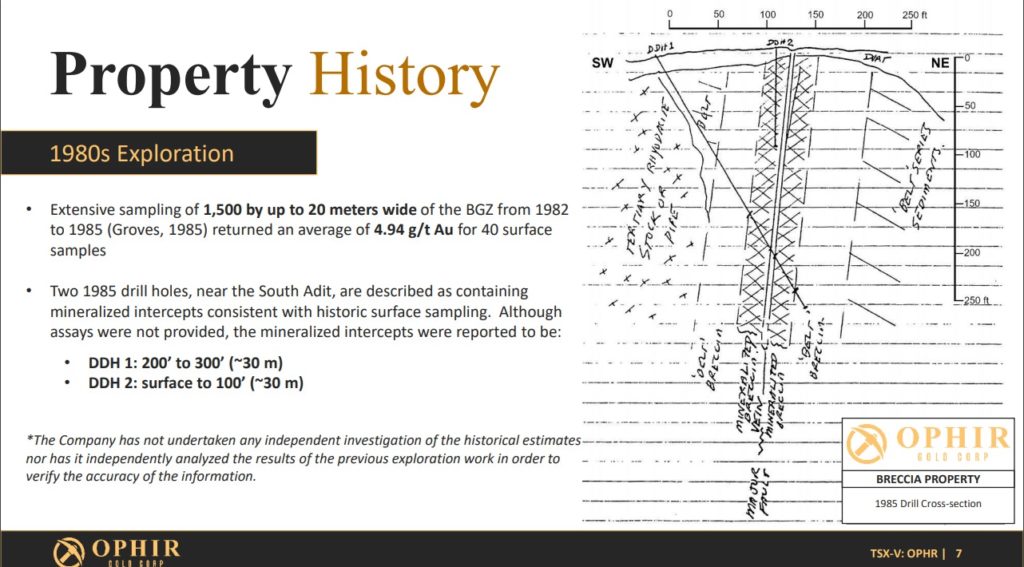 … Note the fact that two historic drill holes hit around 30m long intercepts which were “described as containing mineralized intercepts consistent with historic surface sampling”. Said sampling returned an average grade of 4.94 g/t Au. If Ophir is able to confirm that such mineralization is indeed present by hitting say ~30 m of 5 g/t Au then I have a hard time seeing how this valuation could persist. This is pretty much why I think the risk/reward is great even though drilling is very speculative by nature. The risk/reward gets even better when one factors in the historic resource: 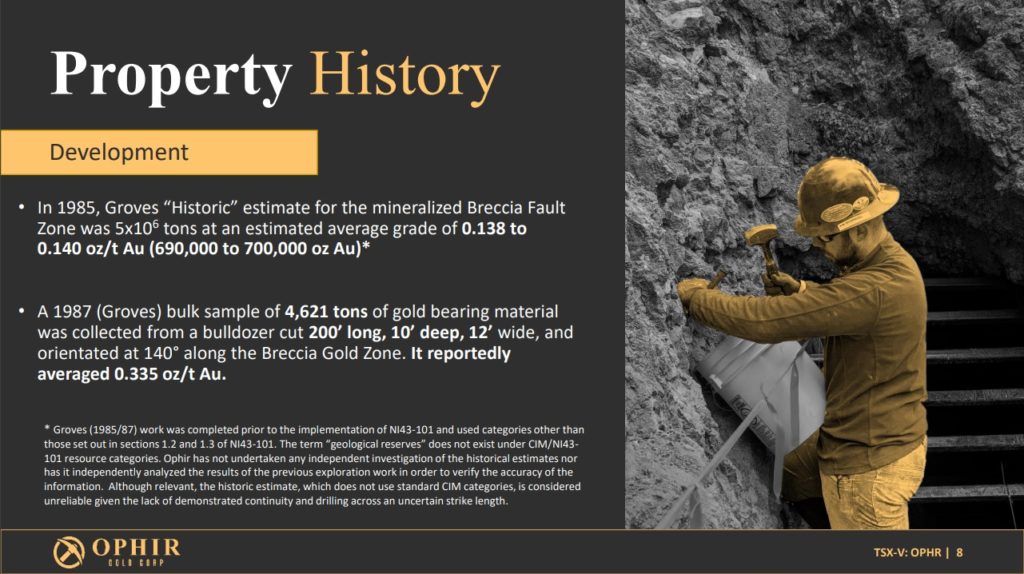 What value should one put on 690-700 thousand ounces of >4 g/t material that should be pretty close to surface? I don’t know but something like that is more than majority of junior explorers will ever find. More importantly there is obviously a gold bearing LSE system in place here. In other words this is certainly not super high-risk, grassroot exploration that Ophir is currently doing. This current drill campaign is one of those few cases where some form of success should be expected actually. What makes it even better is the fact that a) It might get better at depth, b) There is no reason to believe that there isn’t more gold both at depth as well as in other areas of the property: 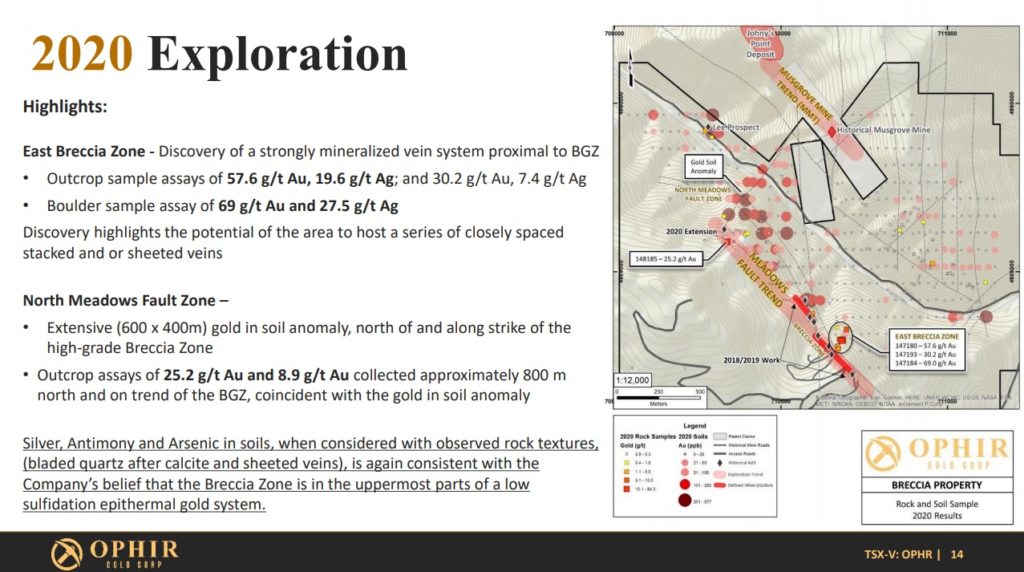 … Bonanza grade samples have been found in the East Breccia Zone and a robust gold in soil anomaly has been confirmed in the North Meadows Fault Zone. More evidence that there might be a lot of additional potential is the fact that the Ground Magnetic Survey shows a trend of magnetic low that passes through and extends beyond the Breccia Gold Zone: 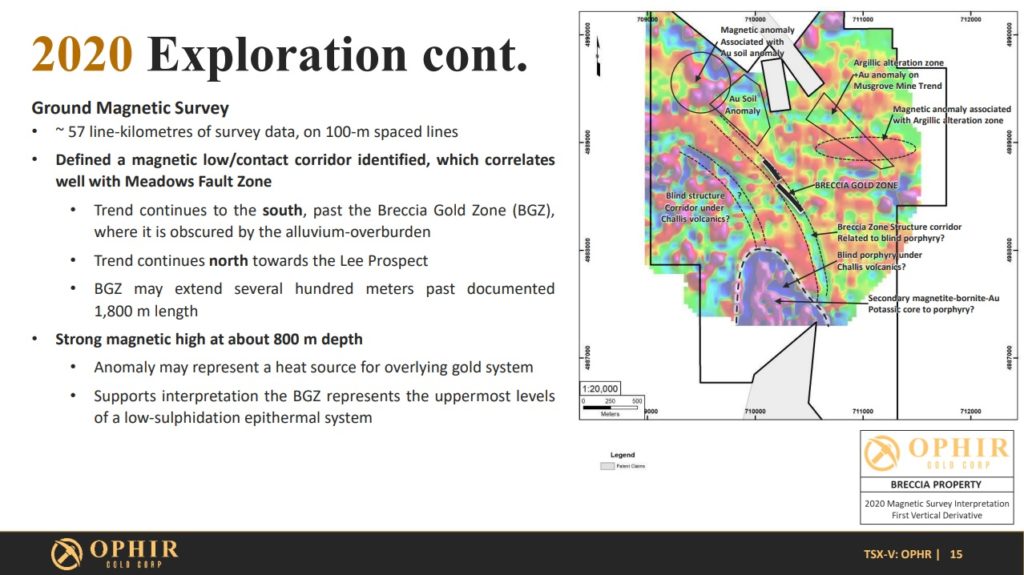 Magnetic lows can be explained by hydrothermal alteration which basically means that hydrothermal (and hopefully gold bearing) fluids have flowed through the crust and destroyed the magnetite in the rock while depositing gold at the same time. It sure sounds plausible given that the already confirmed gold system is located at said trend of magnetic low. 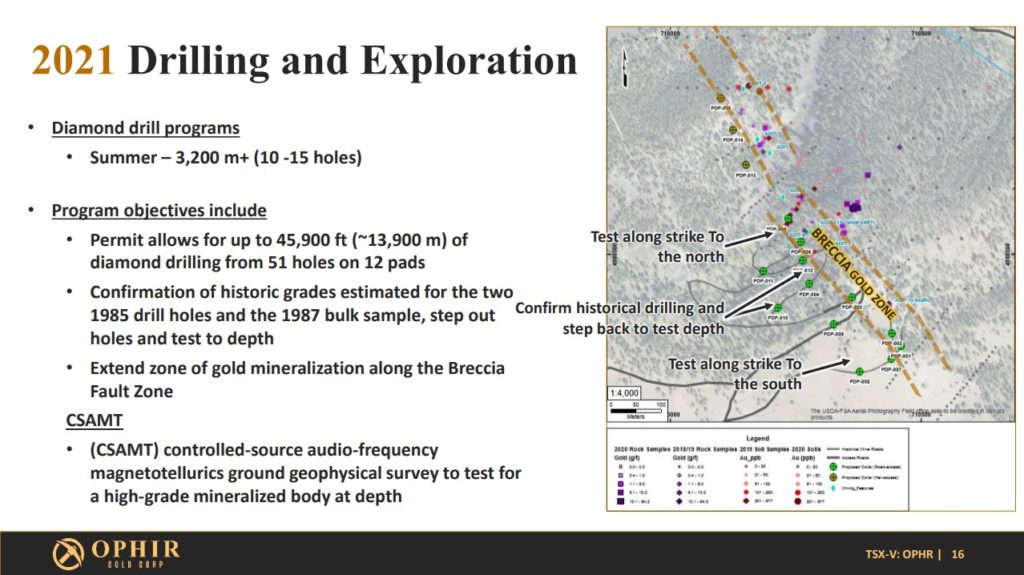 Ophir gold is currently drilling and I expect there to be more drilling in the future after the current 3,200 m campaign is finished. The company will also do a CSAMT survey which is well suited in terms of triangulating where potentially gold bearing quartz veins might be located at depth.

My case for Ophir Gold is simple. If I believe there is say a 70% chance that there is around 700,000 ounces of high-grade gold to start with then Ophir Gold looks cheap right now. If I also factor in the fact that it looks like there is a lot more gold along strike, in parallel trends and at depth then there is a chance that the company could one day have proven up a lot more than 700,000 ounces. In such a future the current valuation would be ridiculously cheap.

At the end of the day it all comes down to Risk/Reward, because there are no guarantees in the stock market, but I do think the Risk/Reward case for Ophir is very attractive.

Note: This is not investment or trading advice. I own shares of Ophir Gold and the company is a banner sponsor. Therefore consider me biased and do your own due diligence. I cannot guarantee the accuracy of the content in this article.