Novo recently came out with a NR and there was also an interview with Quinton Hennigh done by Kereport.com and I thought I would comment on a few things that I found most interesting. Today I will focus on Comet Well since my last Novo article was about Egina. The following content is speculative in nature and are my personal opinions!

During the Kereport interview we heard that Quinton believes that the Tomra sorters might potentially be able to recover approximately 90% of the gold coupled with a mass pull of say 0.1-0.2%. In reality this would for example mean that 10 tonnes of ore grading 2.5 g/t would enter the sorter and spit out a “sorted concentrate” weighing between 10-20kg with a head grade of between 1,125-2,250 g/t. This would be done without any conventional processing which takes time, requires a lot of water and obviously costs money. Heap leaching for example is often a relatively cheap way of recovering gold but it takes time to get the gold out and the final recoveries are often below 75%:

A simple gravity plant might be an option but that probably costs much more and will still require a lot of water. Pilbara is a very dry place after all(!).

Quinton is also open to the idea that there might a way for Novo to assess grade in real time during the sorting process. The Tomra ore sorters perform pixel counts on material which the sorting machine believes to be gold. I have no idea just how accurate the grade control would be but it’s easy to understand that the sorting machine could judge that lets say a 10-tonne sample would be completely barren if it did not pick up any pixels of material deemed to be gold, in a matter of seconds. Depending on the geometry of the gold and the angle(s) of the detectors, I as I said, have no idea what the accuracy could be for gold bearing samples. But with that said, if it works, Novo would be able to prove up and de-risk prospects faster than any gold miner on the planet. It would be “cutting edge” stuff, in the words of Quinton, and technological advances seems to often be behind a lot of successful growth companies (Shale oil companies have for example used new technologies/techniques to make US go from a big importer of oil to an exporter of oil during the last decade or two).

A lot of people are constantly bashing Comet Well because of the “low” grade at Comet Well. When did grade equate to value I ask myself? Well, never. It’s just that grade is often used as a barometer for margins and thus free cash flow (actual value). Some of the world’s most valuable gold operations are large low-grade (sub 0.7 gpt) deposits. Why are they valuable? Because they have a lot of gold which is also profitable to mine.

In my very personal opinion, the big deal (at least for now) with Comet Well and the extremely coarse Mt Roe conglomerate gold is NOT the grade, but the margin potential coupled with the ridiculous exploration potential.  There are tonnes of conventional prospects that have had some high-grade to bonanza-grade intercepts and yet they are not in production. Why? Because the mineralization might have been too deep, too small or in a very poor jurisdiction etc. So what’s the case for Comet Well? It starts at surface, has 10 km of strike to start with (which could be part of a semi-craton wide to craton wide gold bearing lag sheet) and is located in the second best jurisdiction in the world.

If the ore sorting works the way Novo suspects, and on par with what the trial testing showed, then we are talking about a possible production scenario with ~90% recoveries that requires no water and would result in (ultra) bonanza-grade direct shipping ore. Novo could scale the operation to infinity and would still not need to actually ship a lot of material off site given the fact that the processed ore could be reduced by 99.9-99.8%. A production scenario with a 0.2% mass pull of ore grading 2.5 gpt and 90% recovery would produce direct shipping ore worth US$47,000 per tonne. Novo would be producing diamonds by crushing and sorting coal basically.

Now, lets take a look at the planned bulk sampling exercise. Novo will submit a “Program of Works” for a circa 100,000 tonne large-scale bulk sample to the Department of Minerals, Industry Regulation and Safety (DMIRS). The company has already come up with multiple areas that are considered to be appropriate sampling sites. These sites would test both horizons over a 2 km stretch: 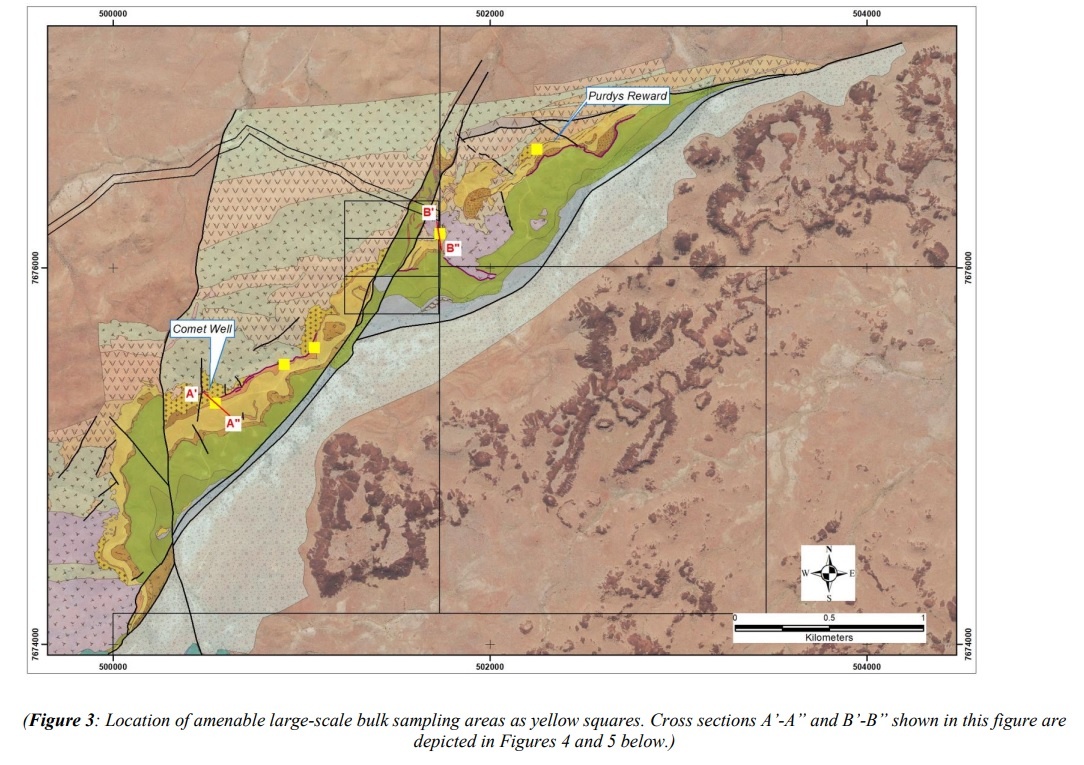 So lets say that they are able to get approval and are able to process 100,000 tonnes of material within the next 6-12 months. The most important thing that we could get out of this exercise is NOT… the estimated grade in my opinion but a sense of how profitable these sheets could be to mine because then we are on the way to showing proof of concept in terms of possible value per tonne and value per m2 (these are potentially basin wide sheets after all) by extension. If anyone believes that the market won’t care in a potential future scenario where Novo shows they have gently dipping gold bearing sheets with 10 km of outcropping strike length coupled with a 100,000t bulk sample program indicating this to be high-margin gold then I have a bridge to sell you.

What could the processing of 100,000 tonnes of Mt Roe conglomerates translate to, cash wise (assuming a US$1,300 gold price)?

That’s from 100,000 tonnes of material that covers a fraction of the total outcropping strike, at Comet Well and Purdy’s Reward, alone. We of course won’t know the gold content or costs until after the fact, but that’s why it’s called speculation. If you want to have a shot at out sized returns you have to take risks and be willing to bet against the herd who prefers more certainty.

Novo’s current (basic) Enterprise Value is around US$180 M. If Novo could squeeze out US$7 M in free cash flow from a 100,000 tonne bulk sample, that would imply a EV/FCF number of 25.7 assuming Novo could produce one such “trial mining” exercise per year (all else equal). With 10 km of (current) strike at Karratha, the total tonnage of ore material assuming the sheets are say 2m thick in total and extends 500m down dip equates to 27,000,000 tonnes (assuming 2.7t/m3). That would be enough for a “few” additional 100,000 tonne bulk samples (Keep in mind that the overburden obviously increases down dip and the strip ratio with). Now some might understand why I get greedy the lower Novo goes since I see it as an opportunity to potentially get an increasingly higher yield per share in a few years. Also keep in mind that this article is just about the Karratha project and doesn’t even include what Egina, Beaton’s Creek and all the other prospects on Novo’s 12,000 km2 land package might become. Heck, I don’t even want Novo to go up yet, at least not until I have more dry powder.

Allow me to quote Keith Barron on this very topic:

Quinton has a unique deposit which presents a unique opportunity. You just have to stop applying the usual logic to it and think outside the box. He has already told me that his preference would be to ‘bulk sample’ the thing till Doomsday, and make heaps of money doing it…

I think it is easy to understand that there is a reason(s) why Novo is pursuing the ore sorting path for Comet Well. They could of course just use a simple gravity mill and that would probably work fine. BUT, if there is a chance that using ore sorting technology works the way they hope, it would mean that a) Novo wouldn’t require much water, b) Grade control and ease of proving up/de-risking new prospects might be unparalleled, c) No processing costs, d) Environmentally friendly production, e) “Unlimited” operation scaling potential, f) Extremely mobile operations since Novo won’t have a big stationary plant, and g) Reduced CAPEX compared to building a processing plant.

… Worth following up on the unparalleled ores sorting trials even though it might take a few months? (Obs! Rhetorical question… At least in my opinion!)

How many commentators/bashers/uninitiated even mentions or are even aware of the ore sorting aspect? How many bashers provide any sort of calculations? None?… Oh well. I guess that is what happens when something which has never been seen before is on the table. Karratha is extremely unconventional in itself and Novo are pursuing unconventional means of unlocking it. No one has any reference to go by so most people view Karratha in a conventional way, and that is in my opinion the main reason for the lackluster share performance. Even though there are no guarantees, some % of success ought to be reflected in the SP.

Make no mistake: Novo (Pilbara) is the black swan of the gold mining space. 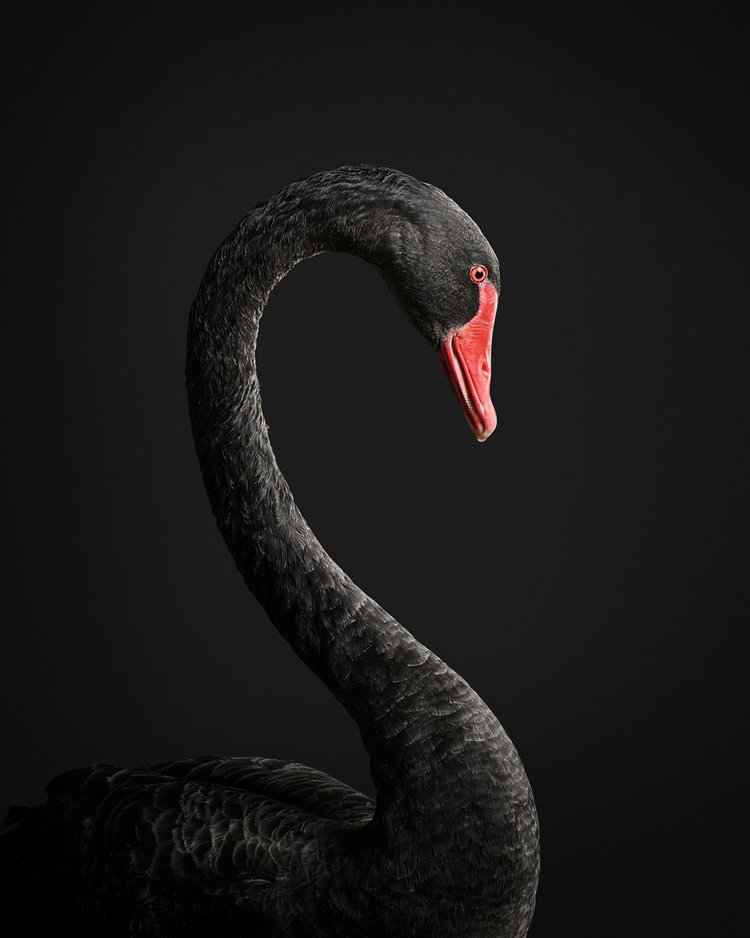 Note: This is not investment advice! I am not a geologist nor am I financial advisor. Always do your own due diligence and think for yourselves. I own shares of Novo Resources and am thus biased. I have not received any compensation for writing this article but Novo might become a passive banner sponsor on my website in the future.