Just some quick thoughts on New Found Gold. Note that I own shares of New Found Gold and that the company is a banner sponsor. Therefore assume I am biased and make up your own mind regarding if my subjective thoughts have any merit in your eyes.

As people might know shares of New Found took a nosedive on Friday, but recovered quite a bit into the close, as it was announced that assaying bias had been discovered. It means that reported numbers overstated the grades in the 30 samples that were tested: 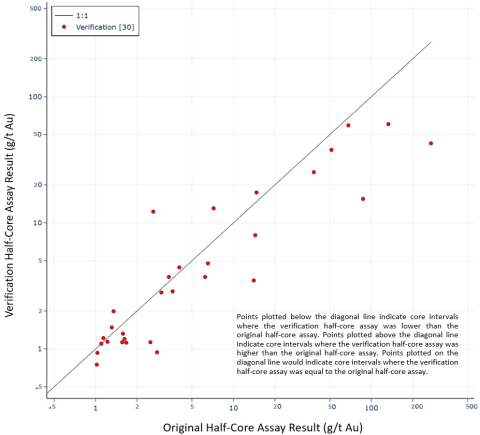 This news release obviously suggests that the grades, especially the bonanza-grade intercepts, have probably not been an accurate representation of the mineralization.

What it does not mean is;

First of all the mineralization is nuggety to begin with so the grades should be volatile. Second of all there is of course standard randomness involved. Thirdly as the NR stated the “strong bias in these results that particularly seems to be present in the higher-grade samples”. Now although bonanza grades are flashy, and good for headlines, there will be a cut-off grade for any resource estimate. In other words a “bias sample” might show 200 gpt and the “verification sample” might show 60 gpt. The actual grade in that narrow cylinder shaped piece of rock might be closer to 130 gpt. Lets say the cut-off grade would be 70 gpt then the “truer grade” would still be cut above that and 50 gpt would not be booked (although a higher, real grade would obviously show up in more cash flow of course). The company also announced that in order to tackle this bias and nuggety mineralization it will start doing “whole-core” assaying which means larger samples that will test the whole core. Interestingly the company will be using the Chrysos PhotonAssay method which has a lot of benefits and is starting to gain traction world wide.

Oh and from what I have heard Kirkland Lake had the very same issues and the way they addressed it was Chrysos. Food for thought.

(bold added by me)

In other words we only know that the 30 samples described in the news release showed bias on average and we know there was seemingly no bias of significance in the 10 previous samples. We can thus conclude that the likelihood of ALL, so far released, assay results having been biased ought to be very slim (even though the current commentary out there seems to just assume this has 100% penetration. No surprise there since many missed the NFG run and you know what does to humans…). This is important to grasp in the context of impact. If you would have for example a 50% positive bias (overstatement of grade) in 100% of the samples on average then that is a 50% exaggeration of grade. If there would be 50% positive bias on 20% of the samples then the exaggeration overall would be 0.5*0.20 = 10%. If there is 30% bias in 40% of samples the exaggeration would be 0.3*0.4 = 12% etc.

To sum up: We have no idea when the bias “started”, and therefore no idea of sample penetration degree, nor impact on average. We just know that the first verification batch of 10 samples did not show bias of statistical significance while the other, more recent batch of 30 samples showed it.

Now moving along it is worth noting that it seems like at least Keats and Lotto starts near surface (and maybe the other shoots do as well):

Now if this was a pure UG operation 1 km underground then grade would obviously be more important. If you’re making money on 5 gpt, and the assumed grade was  20 gpt, but the real grade was 6 gpt (to be extreme) then the actual margin would be 17% instead of 75%. That’s a big difference. If this would be an open pit operation then the cut-off grade for ore could be, who knows, but lower. Anyway, I guess what I am trying to say is that I think you could probably cut the grades by a lot before an open pitable operation would be unprofitable. A high-grade deposit can simply suffer a lot more problems relative to a low-grade deposit (all else equal). It’s also worth noting that nuggety systems tend to be higher real grade than drilling would suggest.

In other news, Maritime which is another Newfoundland focused junior, is on the way of developing an open pit mine on orogenic gold veins: 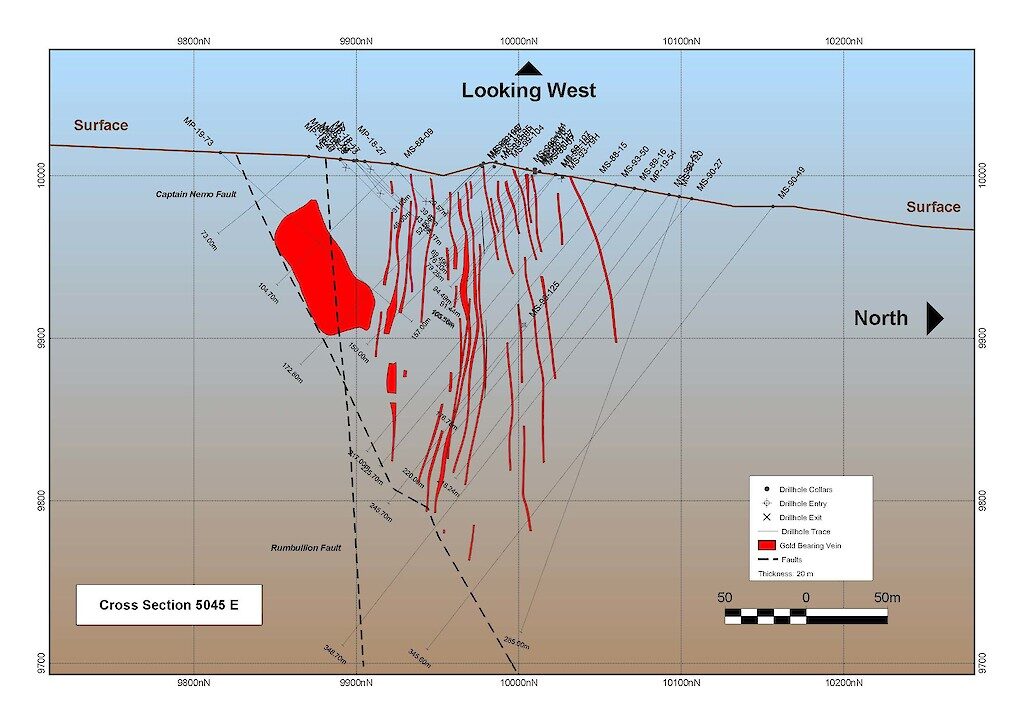 All I know is that Queensway look to be a huge system, with multiple high-grade shoots, in one of the best jurisdictions in the world currently.

Was this a negative event? Of course it was. To what degree? I don’t know (no one does). Is it a case breaker? I personally don’t think so. Do I know how the story will play out? Nope. Is it overvalued? Well, as always that depends on a lot of things like time horizon… Especially when you are doing a 400,000 m drill program with 14 rigs. In other words things can change a lot in just a few months, let alone years.

I actually added a bit during the sell off and the share price interestingly climbed above a major support line into the close on Friday. Good dip buying? Well, only time will tell that as always. Note that this is not investing or trading advice and that New Found Gold is part of a diversified portfolio. 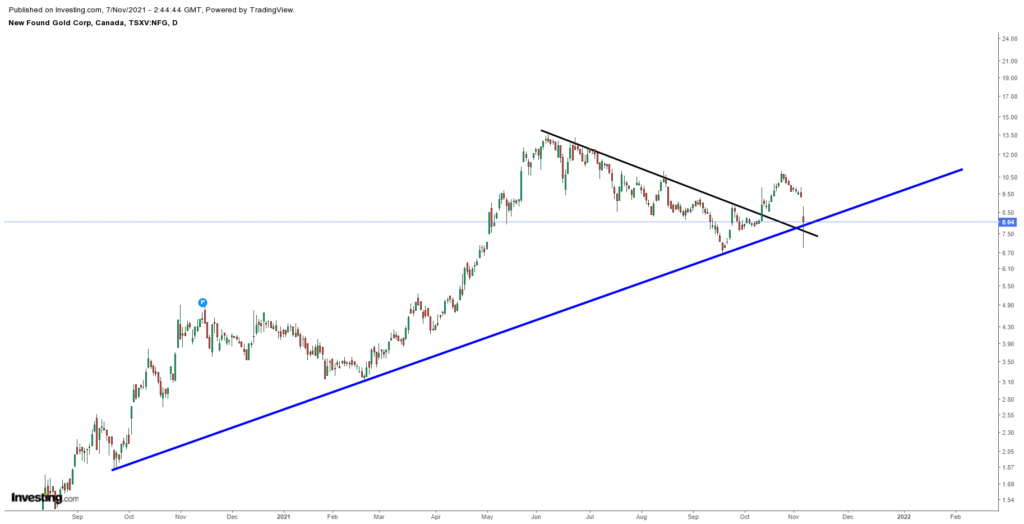 Note: This is not investing or trading advice. I own shares of New Found Gold and the company is a banner sponsor. Therefore assume I am biased and make up your own mind. I cannot guarantee the accuracy of the content in this article. Junior mining stocks are risky and volatile! Assume I may buy or sell shares at any time and don’t invest money you cannot afford to lose etc.