Organised by Kai Hoffman, president and CEO of Soar Financial, the Deutsche Goldmesse will allow retail investor delegates to hear from and interact with the executives of 29 presenting companies ranging from early stage exploration companies through developers to a producer in the shape of Endeavor Mining Corporation.

It was originally planned as a physical conference in Germany in May as there has never been a dedicated event for a German-speaking audience in the spring,” Hoffman told Mining Journal.

German-speaking Europe has long held precious metals in high regard and seen them as an attractive investment as well as the companies exploring for them. “The taste for gold has been imprinted on our genes since 1929 and the experience of hyperinflation. Germans buy a lot of bullion and junior stocks,” Hoffman said.

While German retail investors can buy shares in many junior explorers locally through the dual listings on the Frankfurt Stock Exchange many companies have, their access to information is often limited to what they read in newsletters or online sources, particularly if they do not speak English. “The conference aims to give them first-hand information from management teams through presentations and Q&A sessions with simultaneous translation, which really lowers the hurdle for them to engage,” Hoffman said.

With the COVID-19 pandemic forcing a charge to a virtual event, it has broadened the potential audience with Hoffman targeting 1,000 delegates. The start time is fixed to accommodate both European and North American participants. “We are getting a larger audience from all over Germany, Switzerland and Austria rather than just Frankfurt or Munich. As it is online, we are also getting investors from North America as well,” Hoffman said.

In addition to 29 company presentations featuring projects in North and South America as well as Africa, Deutsche Goldmesse will feature 10 keynote speakers providing supplementary information about investing in gold bullion, junior stocks and other aspects from Ronald-Peter Stoeferle at Incrementum and Folker Hellmeyer of Solvecon-Invest, in addition to North American regulars such as Frank Holmes of US Global Investors, Rick Rule of Sprott US Holdings and Rob McEwen of McEwen Mining. 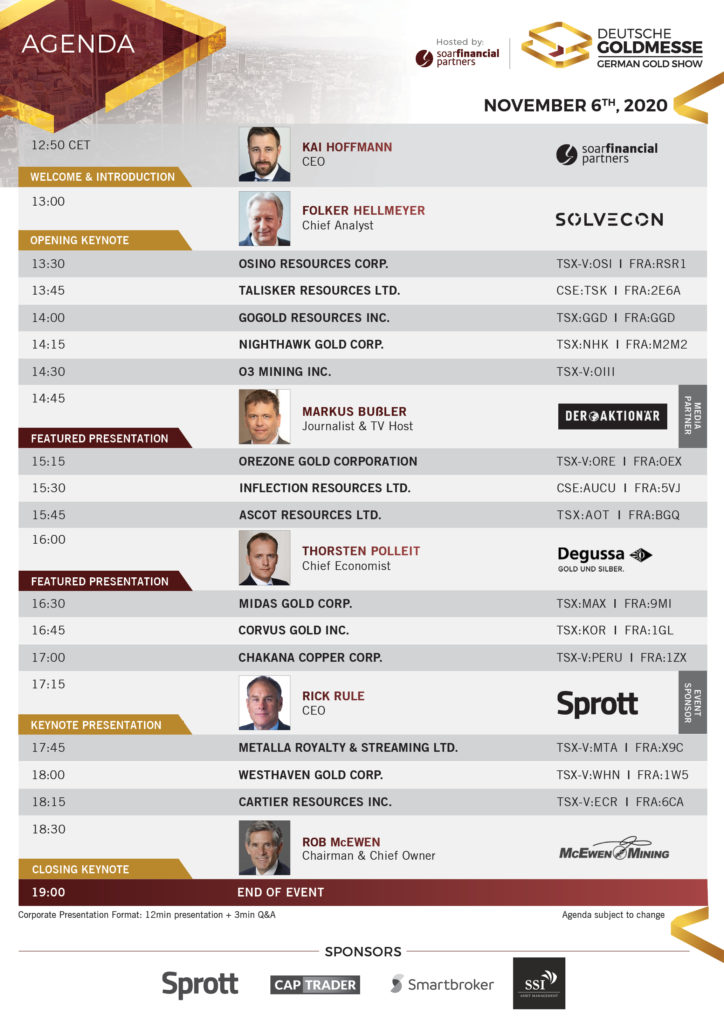