Eloro Resources (NR) – “What is the market thinking?”

Firstly, we got the beyond insane channel sample that graded 442 gpt AgEQ over 166, including a bunch of long >1,000 gpt AgEQ intervals.

… With bonanza grades like that you don’t need a lot of tonnage to have a full blown deposit already.

Then we learned that it appears the mineralization at SBBP might be getting better to the east towards the center of the caldera (where the bonanza sample was taken):

“Recent drilling has doubled the extent of the breccia pipe from 400m to at least 800m in a northwest direction. The grade and intensity of mineralization appears to be increasing to the east, with the Santa Barbara adit returning the highest grades yet discovered at Iska Iska”

We also got snippets such as:

“We continue to encounter mineralization in every drill hole to date, showing potential for a world-class bulk mineable deposit, blending higher grade metal values within the lower grade wide-spread mineralization at Iska Iska. We are well financed to continue pursuing an aggressive exploration program.”

““We continue to intersect widespread silver-tin polymetallic mineralization in all our holes and have now doubled the extent of the SBBP. Our understanding of this remarkable mineralizing system continues to advance; however, we are still at a very early stage in the exploration. Following completion of our first pass drilling on SBBP, we will move the drill to test below the Santa Barbara adit and complete a section of holes to test east of the breccia pipe into the centre of the caldera complex. We will be working with Micon International to design further follow-up drilling on SBBP in order to define a National Instrument 43-101 mineral resource. Drilling will continue to test the CBP from both the north and south setups. As previously announced, we will be bringing in a third drill in early May to begin testing the very prospective Porco (South) target “

I could have called today’s reaction “Missing The Forest For The Trees version 2.0″… 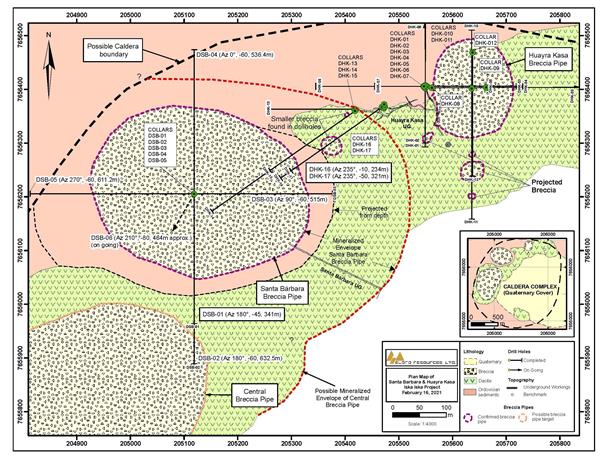 With today’s slide based on the new information: 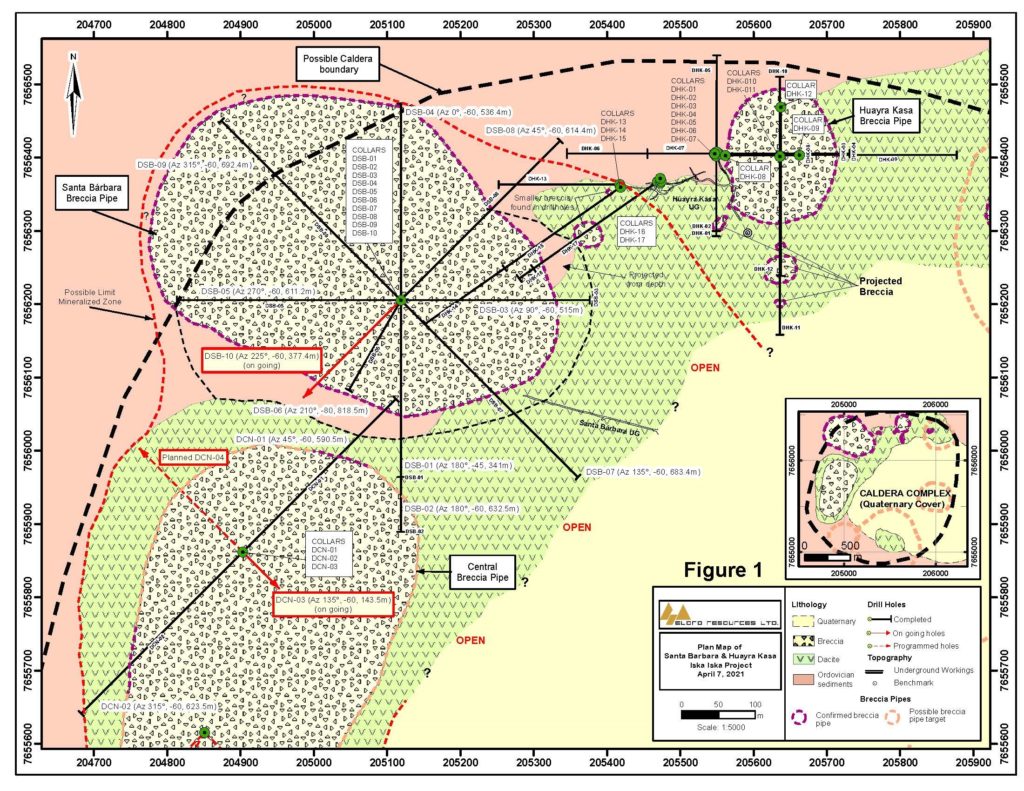 … You see where the dashed line is gone and there are multiple mentions of “open”? Yeah, I would say the potential is growing size wise. Oh and notice where the Adit is. There is just ONE hole that even came close to where the 166m of bonanza grade interval was sampled. If the mineralization gets a) better towards the east (center of the caldera) and b) SBBP is now wide open in that very direction then I would think this is pretty friggin good news.

The large, inferred Porco pipe is also left to be tested. All in all my amateur view is that the blue sky potential might not only be intact but it probably increased with the insane channel sample and realization that SBBP seems to be getting better and is open in the direction where the samples with the highest grades are located.

There is LOTS more to come from a fully cashed up Eloro I think: 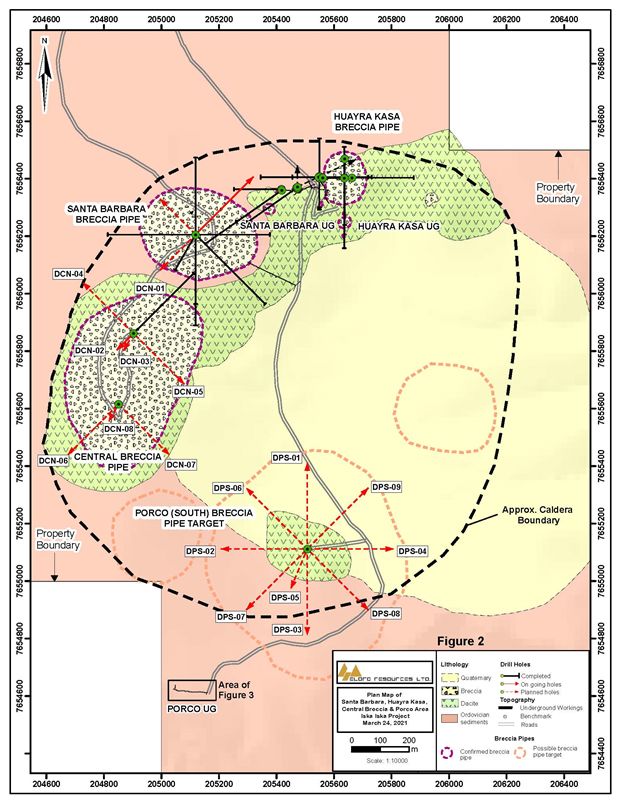 Anyway, I added today. I might be wrong and it’s crazy but my gut feeling is that Eloro is going to get a lot bigger. With a resource coming up it should mean that a) There is already enough data that management believes a resource can be done, and b) A resource would mean that Eloro would be getting a “floor” to some degree by having confirmed ounces in black and white. This is very favorable from a risk/reward perspective (all else equal). I also doubt that the bonanza grade mineralization is only limited to the adit. And if that is true the endowment can build very quickly since the company will be drilling this area shortly. Based on my own crude calculations I think that the inferred mineralization could already be backing a big portion of the Enterprise Value. As such I think that almost all of the blue sky potential shown in the picture above comes for free. Note that I might be wrong but this is my personal belief and I have acted accordingly.

Lastly, the chart looks pretty good as well if you ask me. Reverse Head-And-Shoulded, trendline bounce and a saucer bottom… You name it: 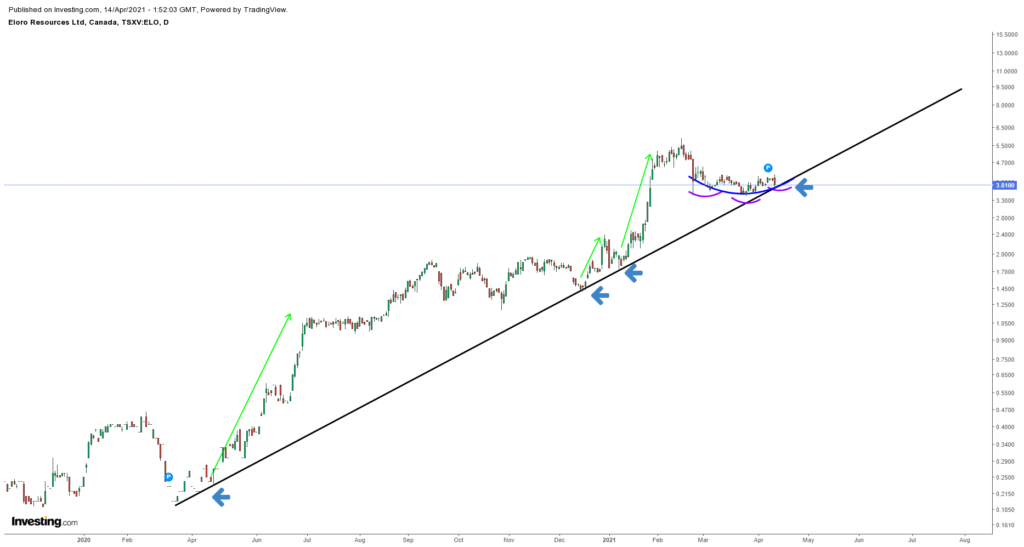 Eskay Mining  (NR) – “The gift that keeps on giving”

Digest and try to appreciate these snippet from the NR:

“On Eskay Mining’s land tenure, six mineralized horizons have now been confirmed within the entirety of the Hazelton Group stratigraphy, the volcanic and sedimentary sequence of host rocks that formed on the sea floor (Figure 1). These include from top to bottom: 1) the Contact Mudstone horizon, host to the high grade Eskay Creek deposit, 2) the Eskay Rhyolite Mudstone Horizon, 3) the Bruce Glacier Mudstone Horizon, 4) The Spatsizi Mineralized Zone, 5) the Brucejack Lake Mineralized Zone, and 6) the Johnny Mt Dacite Mineralized Zone. Horizons 1-3 have been identified at the adjacent Eskay Creek property and continue onto the Company’s property.Horizons 4-6 have been newly identified by Eskay and collectively represent a previously unrecognized VMS mineralizing event on the Company’s land holdings and within in the Golden Triangle as a whole.”

“mineralization within the older Betty Creek Formation indicates that back-arc rifting and VMS hydrothermal activity within the Eskay Rift began much earlier than previously thought. The implications of this discovery are profound, because it means the entire Hazelton Group stratigraphy is prospective for Eskay Creek-like VMS deposits.”

“Detailed stratigraphic and geochemical investigations have allowed for correlation of stratigraphy including precious metal-bearing VMS deposits at the Company’s TV and Jeff deposits to the highly prospective C10 area a few km south. Although late metamorphism overprints rocks at C10, Eskay now can “see through” this overprint and thinks there is exceptional potential for discovery of precious metal-rich VMS deposits at C10 like those discovered by the Company at TV and Jeff last year. Stream sediment sampling (“BLEG”) at C10 in 2020 identified very high Au anomalism over a broad area approximately 7 km along strike. With the power of this enhanced model, Eskay anticipates developing drill targets at C10 for testing this year.”

“Eskay Mining’s exploration team applies thorough science to its exploration approach,” commented Dr. Quinton Hennigh, director and technical advisor to Eskay Mining. “We are delighted to see the synthesis of this new geologic model. Having a strong handle on the mineralizing processes and prospective host rocks puts us in an excellent position to have a highly successful 2021 exploration campaign. This campaign kicks off shortly with a SkyTEM survey covering all areas not covered by the 2020 survey. Our +30,000 m drill program is anticipated to commence in June. We think 2021 will be the most important year in the history of the Company.”

… The Eskay Mining team has been obscenely successful in my opinion. The current version of Eskay Mining is still very much a baby and already the brainiacs have made “profound” geological discoveries. I mean think about it. When Eskay Creek was up and running not THAT long ago the accepted wisdom was that there was pretty much ONE target horizon called “The Contact Mudstone”. Now with this news release we learn that the Eskay Mining time has identified AT LEAST SIX different stratigraphic units that are prospective for precious metal-rich VMS deposits across the 526 km2 property.

To sum up the recent developments for Eskay Mining:

… Which basically means a positive multiplier effect on the Expected Value of Eskay Mining since Eskay got 100% of more land and said land now holds more potential than previously thought. 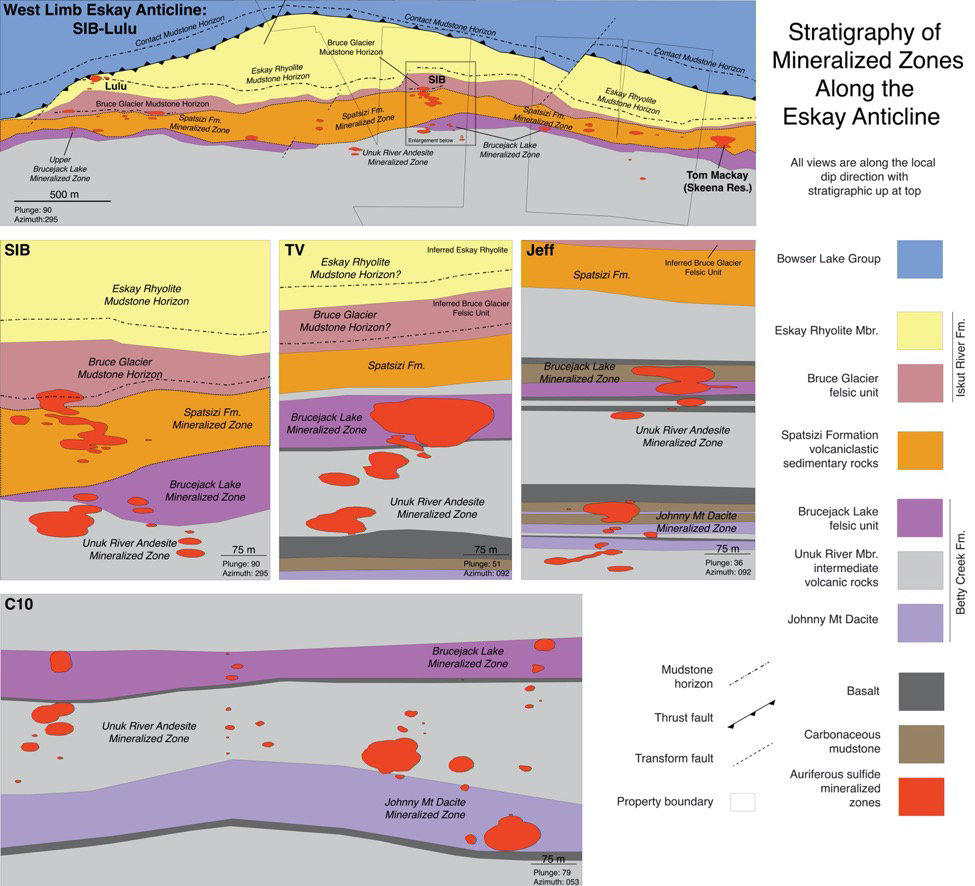 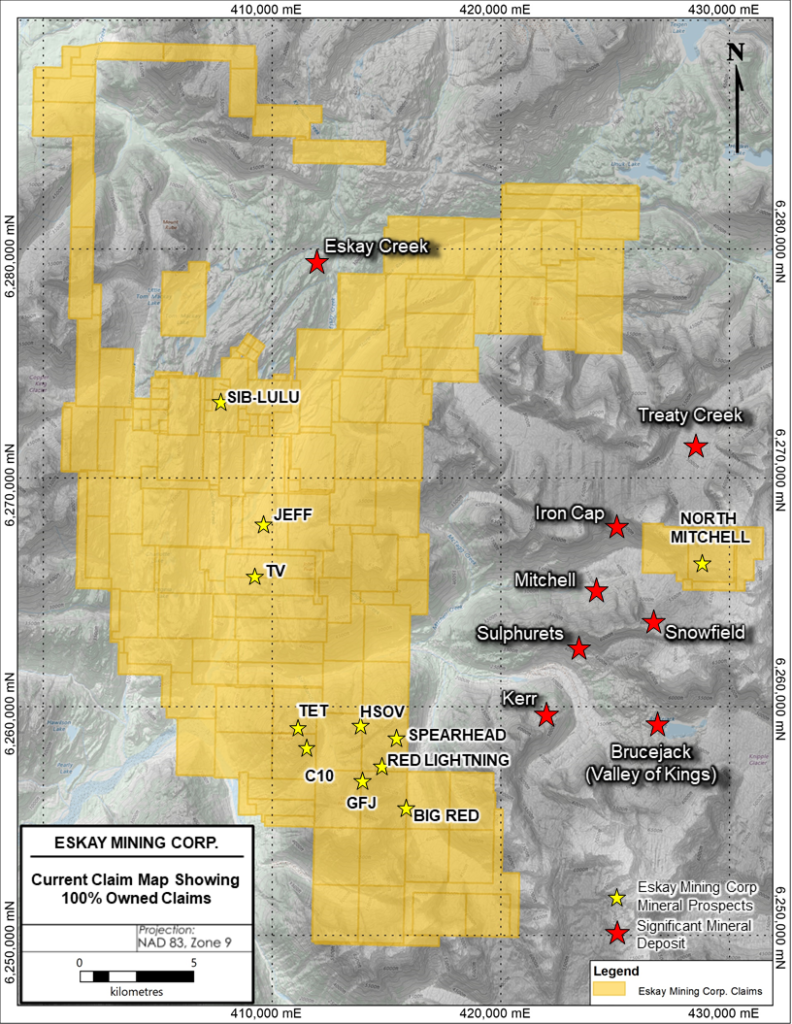 … Equals a story with absolute blue sky potential that few can rival.

I already have an obscene position (way above what any rational person would have) so I can’t rally buy more but I am also getting less and less tempted to sell any for a long time. In just a couple of months this will become one of the hottest exploration stories in the junior mining space.

New Found Gold just keeps pumping out incredible drill results. First of all this is a story I would expect to simply keep on growing. It’s easy for people to call New Found “overvalued” but when one considers the grade, depth and jurisdiction I consider these “exploration ounces” to possibly be some of the most valuable ounces in the exploration space. Remember, an ounce in the ground is only as valuable as the economics of recovering and selling said ounces makes it. Ounces in the middle of nowhere which might have low margins and might not be recovered within 15 years will have very low NPV. Potentially very high grade ounces in one of the most mining friendly jurisdictions in a first world country should be exponentially more valuable. As a matter of fact, Newfoundland is considered to be perhaps THE best jurisdiction in Canada today, as per the provincial government:

“As a part of a mining development plan rolled out in 2018, the province mapped out a strategy that would see five new mines opened by 2030 and lead to direct sustainable employment for more than 6,200 people in operations.“

Even though it is still very much an exploration story I think the company already has reached “critical mass” at Queensway and that there is a likelihood of these ounces being mined in the future. Therefore I consider New Found to have “margin of safety” even though there is no bankable resource yet. Combine that with the fact that the company has a huge land package with smoke all over the place makes me believe that there is a lot of growth yet.

With the above said is New Found “expensive” relative to what the company has done so far? Perhaps. However, I did not buy New Found Gold in light of the latest news release but what I believe news release number #1-#15 might potentially mean for the company. In other words I think the share price might fluctuate around Expected Value but that Expected Value will keep increasing. I actually think Kirkland Lake’s legendary share appreciation around 2019 is a good example of this. Sure the share price popped on a barn burner NR and the share price might have gotten ahead of itself from time to time but X amount of barn burner NRs later and one could look back and say “yeah it was actually pretty cheap back then”. It’s all about the probability of future positive NRs and the impact of said NRs. As it pertains to New Found Gold I currently see no reason why the company would start missing in every hole going forward. 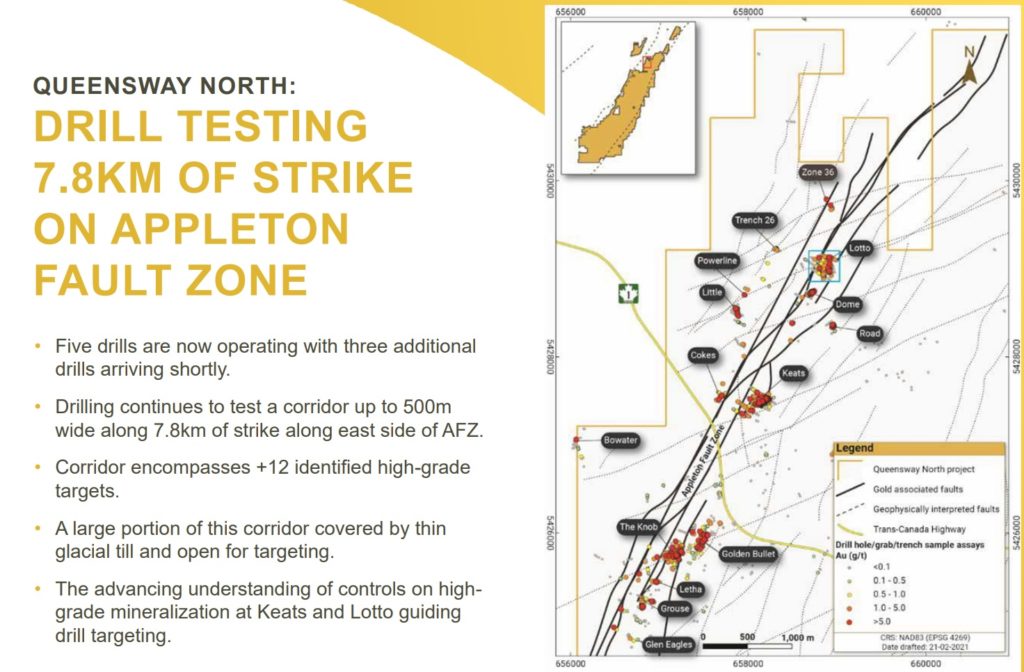 I would also say the chart looks pretty juicy to me: 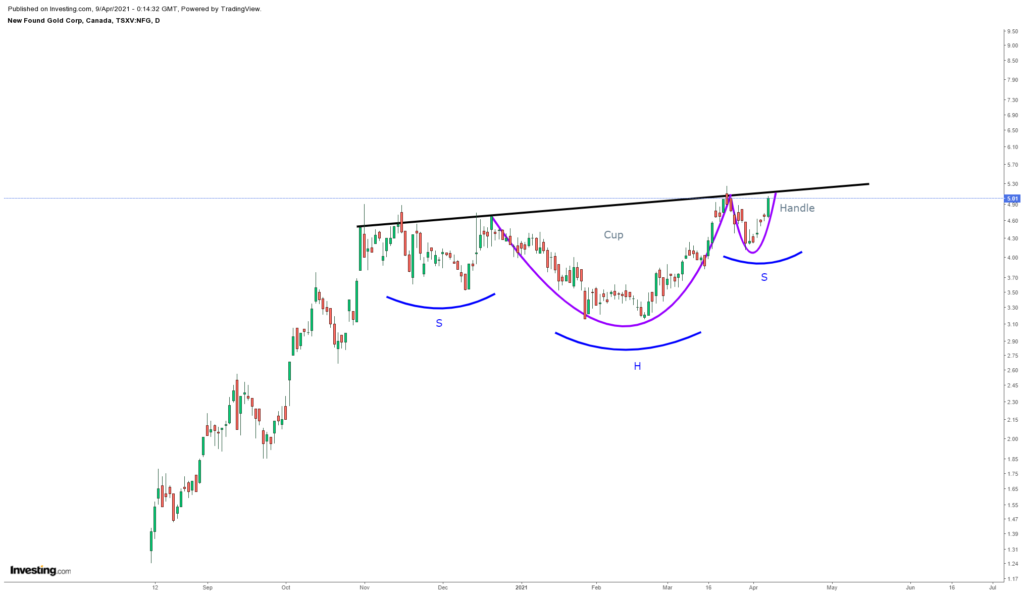 … That looks like a stock that is getting ready to move big time. New Found Gold remains a favorite of mine and it is a cornerstone stock in most of the portfolio I help manage.

Note: This is not investment and certainly not trading advice. I own shares of all companies mentioned and all three are banner sponsors of my site. Therefore you should assume I am biased and do your own due diligence. Junior mining stocks are risky and can be very volatile. I might buy or sell shares at any time.