The largest seller of precious metals in the Nordic countries is completely out of gold and silver coins.

Front page of one of Germany’s largest sellers: 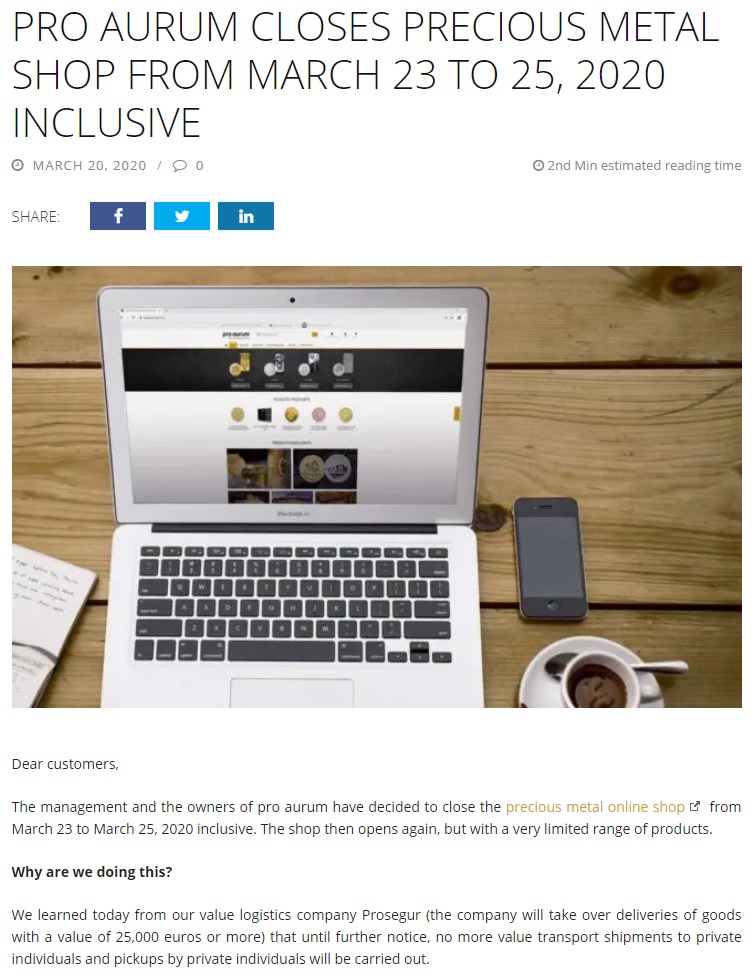 …What lead me to their website was this conversation between Martin Armstrong and a reader on armstrongeconomics.com:

“Pro Aurum is the largest dealer of physical gold and silver outside the banking system in Germany. They are closing their online shop for three days from March 23rd to 25th 2020. They stated that they will re-open again after that but with a limited product choice, and who really knows? The reason they are giving is interesting:

„We were told today by our logistician service provider, Prosegur (who delivers our physical metals worth 25.000 Euros or more) that until further notice they will not deliver to private persons and private persons can not pick up their orders.“

One wonders what is going on here?!”

“This is what is fueling the rumors that Europe will cancel its currency and try to force everything into the banking system. The same is happening to cash dollars.” 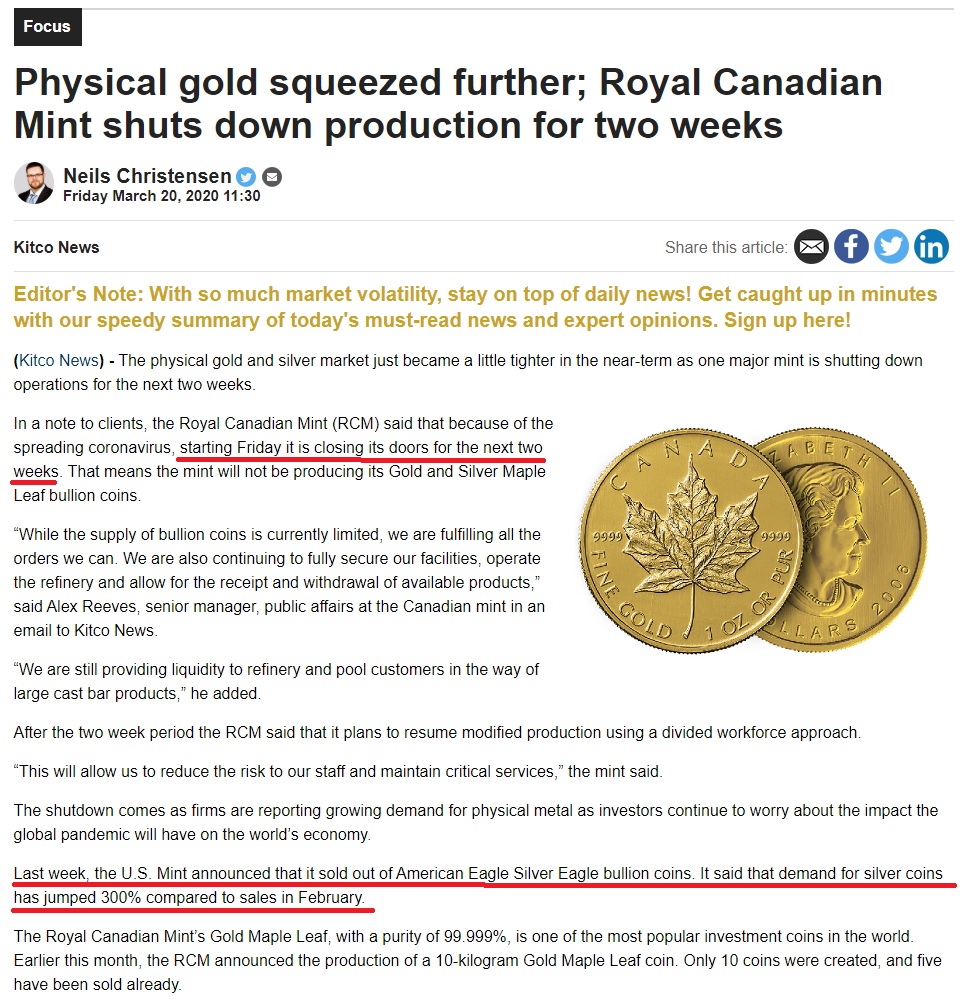 Martin Armstrong has put up a few interesting articles on his site in the recent days as well (I recommend you read them):

This is a snippet from the first article:

Thanks for your prolific post output during this crisis!
Cheers, TGM”

“ANSWER: Europe has directed bullion dealers not to sell to individuals. You will probably see next week a proposal floated that asks Europeans to turn in their gold and convert it to digital under the claim this is patriotic. There are growing fears in Europe that they will cancel the paper currency and force everyone to go digital. This is why there have been runs on banks in the USA for cash dollars in New York, not for fear that the bank will fail, but a panic to get out of Euros”

“There is a rumor that is spreading that Europe will confiscate gold as Roosevelt did, but not to back the currency with gold, but to force all wealth into a digital currency. This would be a game-changer in Europe. I do not see this unfolding outside of the Eurozone… “

… The recent actions, like the German company no longer transporting gold or silver to private individuals, does look a bit shady. What I am currently wondering is what might unfold if the EU go fourth with the actions suggested by Armstrong. Lets imagine that you are an investor that is worried about massive inflation and/or government debt and/or the European banks and want to buy physical gold and/or silver in order to preserve your wealth. Now, if you are suddenly unable to buy monetary metals (nor convert your money into hard cash) or god forbid not even allowed to own any, then what other way could you get exposure to the anti thesis of debt/FIAT?

… Gold mining companies. Even if gold gets confiscated, and/or you at least get barred from buying physical metals as a private individual, the gold mining companies will still be producing this stuff. Well either that or buy GLD or gold futures etc. But if fear of broader confiscations by bankrupt governments ramps up then I guess not even those vehicles will feel even remotely safe (and COMEX is over-levered to begin with).

China, Russia and a swarm of other nation states have been buying gold and we know the citizens in the East love gold so there will certainly be a demand for it even if citizens of some countries will be forbidden to buy or even own it. The Indians would never give up all their gold without a revolution for example. Thus, if some bankrupt nations around the world really goes the draconian way and bans gold buying and possibly even makes gold ownership illegal then gold miners might be the weapon of choice during the end game.

We know Roosevelt limited (semi-confiscated) gold in the US through Executive Order 6102:

“Executive Order 6102 is a United States presidential executive order signed on April 5, 1933, by President Franklin D. Roosevelt “forbidding the hoarding of gold coin, gold bullion, and gold certificates within the continental United States”. The order was made under the authority of the Trading with the Enemy Act of 1917, as amended by the Emergency Banking Act the previous month.” – Source

… So basically the US government forced citizens to turn in their gold at a fixed price and then they revalued it much higher in dollar terms. Thus, citizens were not allowed to shield themselves from the devaluation of the US dollar relative to gold. Just because citizens weren’t allowed to own gold it didn’t stop the production of gold however. Just look at what happened to the share price of Homestake Mining, which was the largest US gold producer, after the Executive Order was announced:

… Therefore I am open to the possibility that if people really start sniffing out that the EU (or whatever bankrupt nation) is heading the way as described by Armstrong then we could begin to see a rush into gold miners. With the lock downs in Europe (ESPECIALLY THE EURO USING NATIONS) seemingly intensifying, with police/military patrolling the streets and large fines if one goes out of their house, this would be the opportune time for governments to take DRASTIC/DRACONIAN ACTIONS. I mean consider the notion of both military AND a “killer virus” roaming the streets. If that mix doesn’t dampen the mood to riot or whatever, nothing will.

Things that makes me go hmmm…

Why are the restrictions seemingly much less in NON Euro using countries?

Sweden, Norway and the Brexiteering UK have not done total shut downs for example as far as I know. Heck I just saw crowded restaurants just a few hours ago in Stockholm, which also happens to be the “epicenter” in Sweden. Schools are open and they are only really testing people that come into the hospitals with severe symptoms. This also makes the fact that the death rate in Sweden (and every NON Euro using country in Europe) is so much lower than in for example Italy even though Sweden has even less critical care beds than Italy (which has notoriously few per capita already). France has even banned all family and social gatherings while Sweden only has a ban on gatherings larger than 500 people. Quite a difference.

Who have the sickest and largest banks/banking systems in the EU?

I guess that would be Italy, France, Germany and Spain…

This might all be a warranted coincidence but given how the European banking system was already crap before this crisis hit I would not put it past the “powers that be” to realize that this would be literally the perfect time to have their Euro using citizens forced to swallow some bitter pills. If people even get passed the police/military that are patrolling the streets, how would they feel about gathering into a tightly packed crowd for a good old riot at this point in time? I think that this week could be very interesting and I think it is a good idea to really read between any lines that might be coming out from governments and central banks. If the market gets a whiff of a coming gold and/or hard cash confiscation scheme then I would assume gold miners could explode higher like Homestake Mining did when Executive Order 6102 was announced in 1933.

… That’s IF we go down that route.

Note: This article is highly speculative and not investment advice!

2 thoughts on “Confiscations and Gold Miners”