Twelve of the completed holes tested beneath the past producing Wenot pit, all of which confirmed that the Wenot Shear Corridor and the associated gold mineralization, extend to depths of at least 100 to 250 m below the past-producing pit. The Wenot pit produced approximately 1.4 million ounces of gold at an average grade of 1.5 gpt Au between 1993 and 20021.  Mineralization is hosted within the 200- to 350-metre wide shear corridor that extends the full 1.7 kilometre length of the pit and along strike.  The pit was mined to a maximum depth of 200 metres.

Results from seven holes testing below the Wenot pit were previously reported (news releases: April 21, 2021 and July 7, 2021), assays are pending for three recently completed holes, and results for two completed holes are presented below:

1 Past production at Omai is summarized in several Cambior Inc. documents available on Sedar.com, including March 31, 2006 AIF and news release August 3, 2006.

The geology of the Wenot deposit is well understood. The west-northwest trending pit measures 1,700 m long by 500 m wide. The pit axis closely follows a major deformation zone, the “Wenot Shear Corridor”, which straddles the contact between a package of basaltic to andesitic volcanics to the north, and a sequence of variably metamorphosed lithic wacke sediments to the south.  This shear corridor forms part of a major structural break which crosses the Guiana Shield and controls gold mineralization here and likely elsewhere in the region.

Within the Wenot Shear Corridor multiple near-vertical shear structures developed, which were later intruded by rhyolite, quartz-feldspar porphyry, and quartz diorite dikes with widths of up to 35m. These dikes are, in places, overprinted by intense hydrothermal alteration. Gold mineralization occurs preferentially within or along the sheared margins of these dikes, where it often occurs as visible gold in silicified, quartz-ankerite veined, and sulphidized zones. These dikes were more susceptible to brittle deformation, facilitating vein stockwork development and mineralizing events.

Although the pit was mined to a maximum depth of 200 metres in the central portion, at the western end it was limited to depths of 50 to 120 m, again due to the proximity to mine infrastructures.  This area and the sediments that extend to the west present potential for a near surface deposit and this area is earmarked for future exploration.

Results from the current drilling plus the sampling of the 2012 drill core preserved by the Guyana Geology & Mines Commission (GGMC) (see new releases February 9, 2021 and December 15, 2020) are being integrated with data from 39 historic Golden Star and Cambior holes that extend below the Wenot pit bottom or test the Wenot shear along its strike extensions.  A wealth of pre-production and production geological, structural and grade data has greatly assisted in the modelling of the structurally controlled gold mineralization and grade trends.  With the combined datasets, the Company is working towards an initial NI 43-101 resource estimate for Wenot.

With the addition of a second drill in July, one short hole tested a geophysical feature southeast of the Fennell pit, intersecting only sheared volcanics. Four holes were completed to test a couple of known gold occurrences at Gilt Creek and Snake Pond, west of the Fennell pit, interpreted to be related to apophyses or fingers of the Omai stock intruding into the adjacent host volcanics.  Quartz veining and minor sulphidization were encountered in holes ODD-016 and ODD-017, but no significant gold values were returned, notwithstanding the proximity to impressive near surface historic gold intersections including 21 m grading 6.9 gpt Au and 9 m of 2.7 gpt gold. Trenching using the on-site excavator was initiated in this area in August and subsequent mapping of quartz veining in the saprolite confirmed a different orientation than previous work had assumed and may relate to splays off of the Wenot shear.  These targets will be re-assessed for follow up work.

Additions to the Technical Team

In Q3, the Company significantly strengthened its on-site technical team, welcoming Chief Geologist John Spurney and Senior Geologist Andres Rincon, both of whom have years’ of international gold experience. They are working closely with consulting geologist Linda Heesterman, whose 20 years’ experience at Omai and knowledge of Guyana geology is invaluable. The Company’s interim CEO is an experienced exploration geologist. Jason Brewster, VP Operations is a mining engineer with hands-on mine development experience.

An independent Qualified Person (QP) has been engaged to complete an NI 43-101 report on the Wenot resource. Drilling under the pit will continue through October. The report is expected at year end or early in 2022.

Elaine Ellingham, Interim CEO commented “The potential to build substantial near-term gold resources at Omai is undeniable.  Rarely can you find a brownfields project like this, that produced an average of 300,000 ounces of gold per year, encumbered over its lifespan by a sub-$400 per ounce gold price environment, which has not seen significant subsequent exploration.  An early corporate decision was made in 2003 to shut down Omai and relocate key equipment to Rosebel, considered a higher-priority development project at the time. Thus, Omai emerges as a unique opportunity to create significant value since potential extensions to mineralization at depth and along strike were not even considered, nor were a number of compelling exploration targets.”

“In a short time period, we have built an impressive technical team of seasoned geologists with international gold experience, combined with technical expertise in senior management and on the Board, well equipped to execute on focused strategies to create significant shareholder value as we unlock the potential of this unique Omai gold project.”

Omai maintains an internal QA/QC program to ensure sampling and analysis of all exploration work is conducted in accordance with best practices. Standards, blanks and duplicates are entered at regular intervals. Samples are sealed in plastic bags and shipped to the ActLabs certified laboratory in Georgetown, Guyana, respecting the best chain of custody practices. At the laboratory, samples are dried, crushed up to 80% passing 2 mm, riffle split (250 g), and pulverized to 95% passing 105 μm, including cleaner sand. 30 g of pulverized material are then fire assayed by atomic absorption (AA). Initial assays with results above 3,000 ppb gold are re-assayed with gravimetric finish. Standards and blanks meet with QA/QC specifications.

Omai Gold Mines Corp., through its wholly owned subsidiary Avalon Gold Exploration Inc., holds a 100% interest in the Omai Prospecting License covering 4,590 acres (18.575 sq. km), that includes the past producing Omai gold mine.  Once South America’s largest producing gold mine, Omai produced over 3.8 million ounces of gold between 1993 and 2005.  Mining ceased at a time when the average gold price was less than US$400 per ounce, leaving significant drilled resources untapped and prime exploration targets untested.  The Company’s short-term priorities are to verify and expand the known resources, while advancing exploration on key targets, providing a solid opportunity to create significant value for all stakeholders. 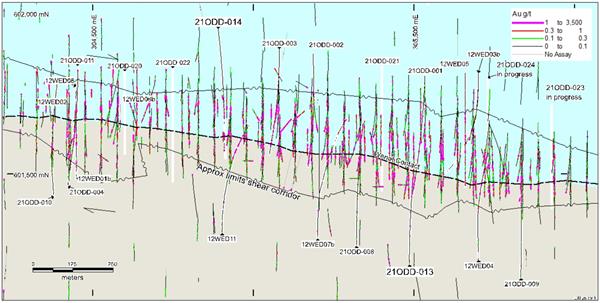 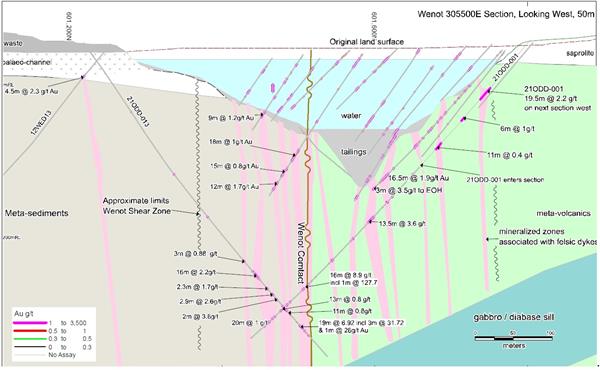 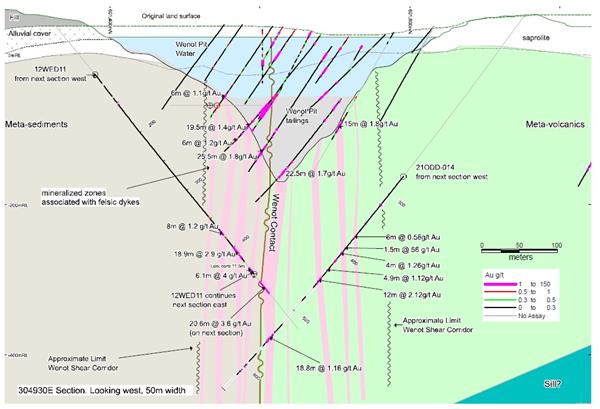