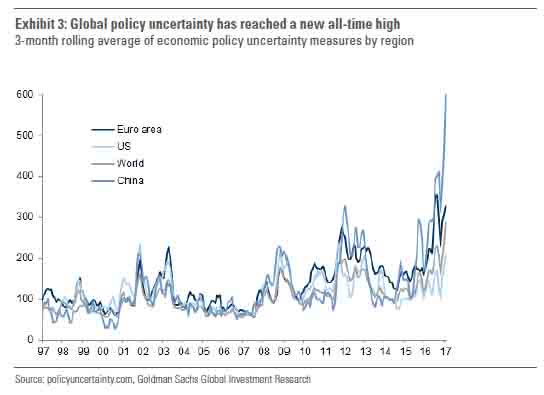 Never before in “modern times” has there been this much policy uncertainty around the world. Never before has central banks printed this much FIAT currency. Never before in HISTORY has there been negative nominal rates. We are right in the middle of the largest monetary experiment the world has ever (and never before) seen. It’s no wonder investors are at peak uncertainty regarding policies, since not even the central bankers et. al  have done anything like this before…

This is what legendary investor Jim Rogers recently had to say about how this could all play out:

” In 2008… Lehman Brothers disappeared. Lehman Brothers had been around over 150 years. A long, long time, a long glorious history they’ve been through wars, depression, civil war they’ve been through everything and yet they disappear. So the next time around it’s going to be worse than anything we’ve seen and a lot of institutions, people, companies even countries, certainly governments and maybe even countries are going to disappear. I hope you get very worried.”

Got gold and silver…?