Sudbury, Ontario–(Newsfile Corp. – December 1, 2021) – Magna Mining Inc. (TSXV: NICU) (“Magna” or the “Company”) is pleased to announce that following the completion of a $3.14 million flow through financing on Nov 3rd, the next phase of exploration at the Shakespeare Ni-Cu-PGM Project will commence in early January. The initial winter exploration program will consist of 4,500m of drilling, which will target the new P-4 nickel discovery and the past producing Spanish River Copper Mine. The P-4 Discovery and Spanish River Copper Mine are both located approximately 5 km from the Shakespeare Mine and could potentially represent satellite deposits to feed a future mill at Shakespeare. Magna has secured a diamond drilling contractor to commence drilling in early January 2022.

A borehole electromagnetic (EM) survey was recently completed which extends the electromagnetic anomaly 230 m below the deepest mineralized intersection. The interpreted EM plate is electromagnetically open at depth and the data indicates that conductivity is increasing at depth. The higher conductivity could be attributed to higher concentration of sulphides, thicker width or both. The surveys were completed on holes MP4-21-01 and MP4-21-02, which were the P-4 nickel discovery holes as reported on September 14, 2021 (see News Release). The drill program in January will prioritize the testing of the depth extent of this EM plate, and also test the eastern EM plate (see Figures 1 and 2).

Jason Jessup, Chief Executive Officer of Magna, stated, “The results of these new downhole electromagnetic surveys at our P-4 discovery indicate that there is a conductive zone extending to depth, well below the mineralized intersections in the first discovery holes that we reported in September of this year. It is particularly encouraging to have the conductivity increasing at depth. We are prioritizing our drilling in January to test some significant step-outs from the previous drilling and see how big this system gets at depth and along strike. The EM survey results are exactly the sort of indications you would expect to see in semi-massive or massive sulphide nickel and copper discoveries in the Sudbury region.”

The winter diamond drilling program will also aim to test new targets at the Spanish River Copper Mine, located approximately 1 km south of the P-4 Discovery (see Figure 3). Magna has the option to earn-in to 100% ownership on the 7 claims comprising the historic Spanish River Copper Mine. The proposed diamond drill program at Spanish River Copper is designed to test high conductance EM plates that have been modelled from surface EM surveys that were completed earlier this year. Zones of chalcopyrite dominated mineralization associated with a deformation corridor have been mapped on surface along a 300 m strike length (see Figure 3). The drilling that is now scheduled is believed to be the first diamond drilling program at this particular location in over 50 years.

Jason Jessup added: “Our drilling at the P-4 target and early exploration work at the Spanish River Copper Mine comprise the first significant regional exploration program outside the Shakespeare mine site in over 15 years. Our early exploration successes support our thesis that our 180km2 exploration land package surrounding the Shakespeare Mine is high prospective for nickel and copper discoveries. Ultimately, we believe that new regional discoveries such as P-4 point to the potential for Magna to build a hub and spoke production model with our already permitted Shakespeare Mine as the core to the operation.”

Magna is awaiting approximately 550 assay results from 11 drill holes from our 2021 program, including 3 holes from the Gap Zone area. It is anticipated that all assays will be received by mid-January. 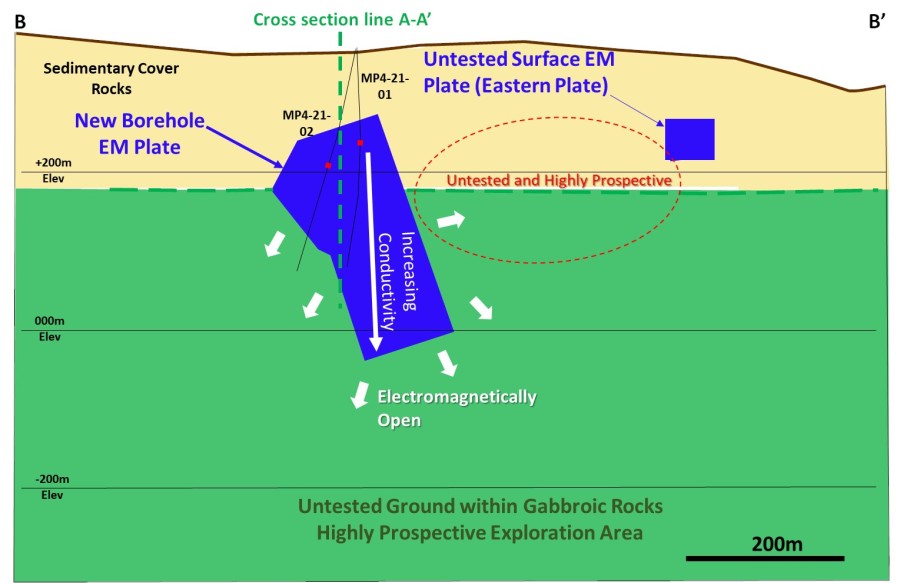 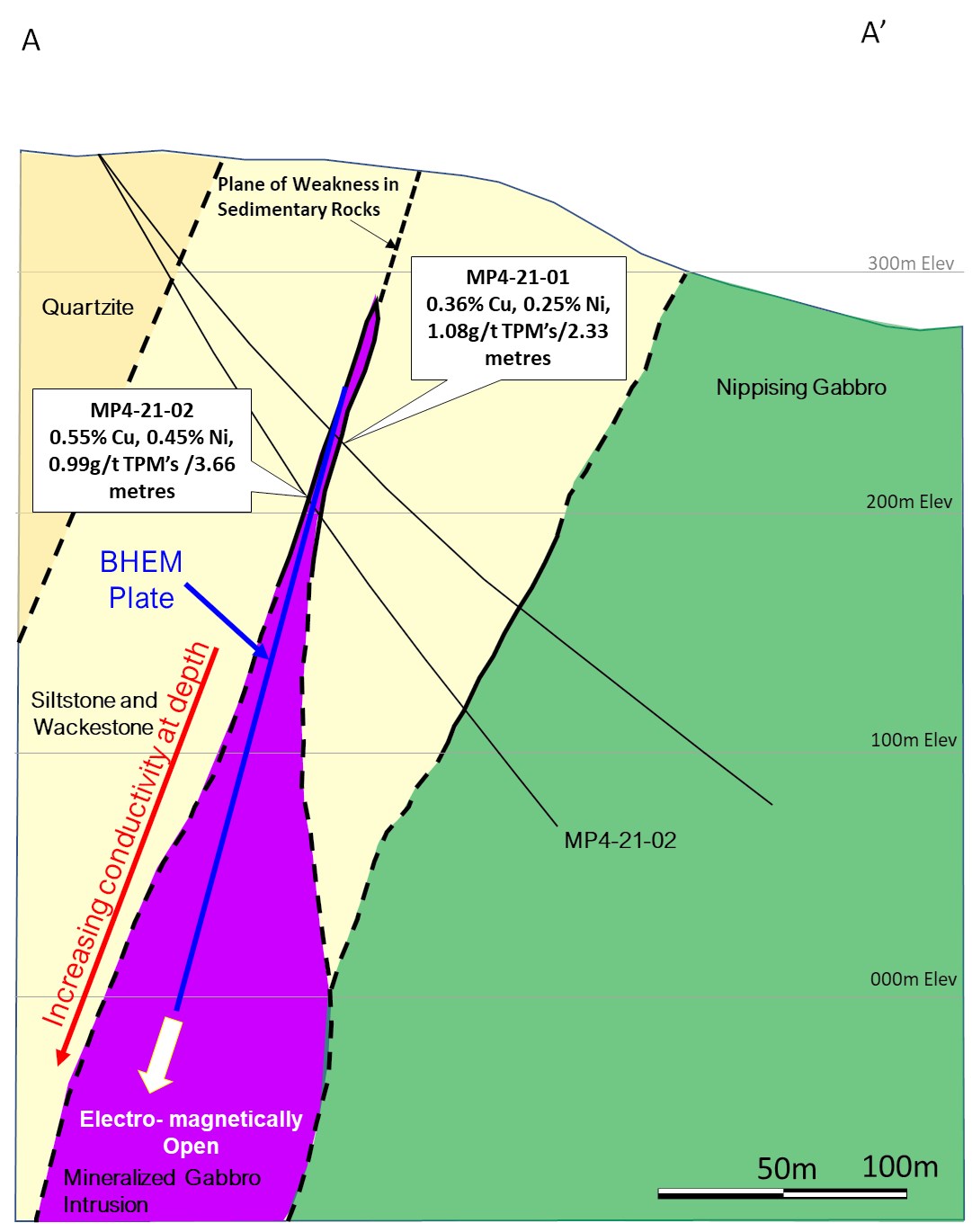 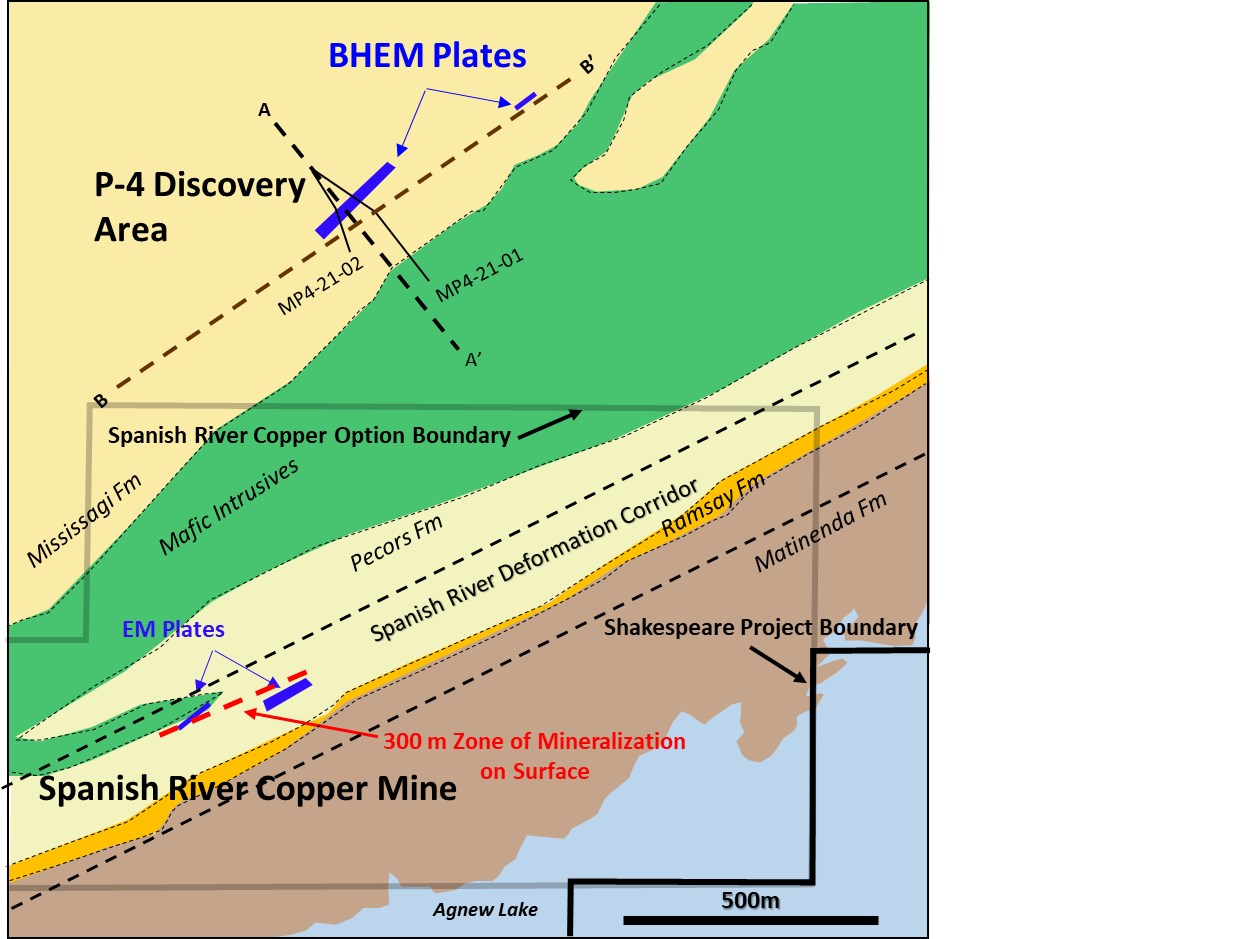 The technical information in this press release has been reviewed and approved by Mynyr Hoxha, Ph.D., P.Geo., the Company’s Vice President of Exploration. Dr. Hoxha is a qualified person under Canadian National Instrument 43-101.

Magna Mining is an exploration and development company focused on nickel, copper and PGM projects in the Sudbury Region of Ontario, Canada. The Company’s flagship asset is the past producing Shakespeare Mine which has major permits for the construction of a 4500 tonne per day open pit mine, processing plant and tailings storage facility and is surrounded by a contiguous 180km2 prospective land package. Additional information about the Company is available on SEDAR (www.sedar.com) and on the Company’s website (www.magnamining.com).