In this article I will discuss why I have bought shares of Magna Gold and why I was happy to have the company come on as a sponsor of The Hedgeless Horseman in order to help get the story out there.

… One can buy all that for around US$61 M, which is the Enterprise Value of Magna Gold at C$1.05/share, in the market right now. I would argue that is extremely cheap for everything the company has right now and then there is the ambitious “vision” for the company that I will touch on shortly. In my opinion it’s like buying 1 gold producer, 2 advanced explorers/developers and 2 early stage explorers while not even paying full value for the gold producer really. I expect to have a multi bagger in Magna over the coming 12 months unless gold crashes.

My Case For Magna Gold

Magna Gold is a stock that seems to be flying under the radar currently. It’s very tightly held given that only 19% of shares are in the hands of retail investors. These are both good factors in my book since I see Magna as a very exciting growth story that I think has, and will have, many “excuses” to revalue higher.

The company owns the San Fransisco mine which is being ramped up and is expected to produce around 69,000 ounces of gold on an annual basis according to the Pre-Fasibility Study. However the company currently has a 30,000 m drill program going and there is an underground component to the mine which is being updated. In other words I think there is a very good chance that the San Fransisco mine will grow and become better in the future. Furthermore the company has two advanced projects in the form of its Mercedes Project (gold/silver) and Margarita (silver). The former could probably be fast tracked to production with minimal capex and the latter could have a bankable silver resources sooner rather than later. Lastly, there are several other projects in the Magna portfolio where additional value could be unlocked via exploration.

In short I see Magna Gold as a cheap “beta” bet with a LOT of organic growth potential (“alpha”). I pretty much see it as being able to buy the San Francisco Mine at a very cheap price currently while getting all the other projects for free. This translates to a very good risk/reward case in my book. One thing to note is that I am also buying a) any future value creating acquisitions/deals made by management and b) Potential monetization of the “side assets” (spin outs, sales etc) for free as well.

The board and management team have considerable “skin in the game” and they are very ambitious in light of the following slide: 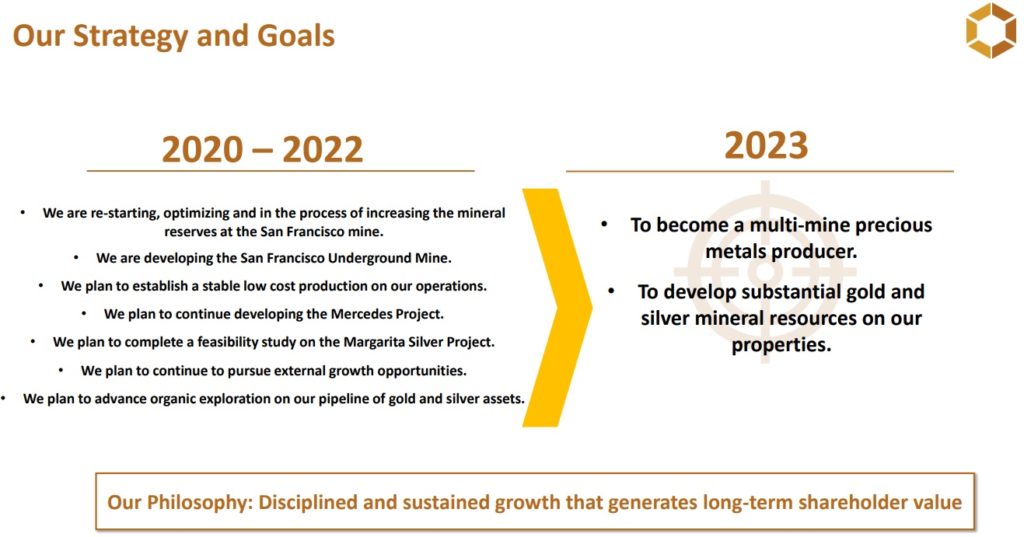 Thankfully the management team led by Arturo Bonillas is all Mexican who have a lot of experience operating in Mexico and my sense is that the team also has very good connections in the country. These are very important factors in my book since very little in terms of mining in Mexico should come as a surprise to the team. An important thing to note is that many in the management team, including Arturo, are intimately familiar with the San Francisco mine.

The capital structure looks really good to me since a) Management/board have significant skin in the game, b) There is a lot of smart money backing the company and c) The retail float is only 19% which means that the stock could potentially move a lot once the story gets better known: 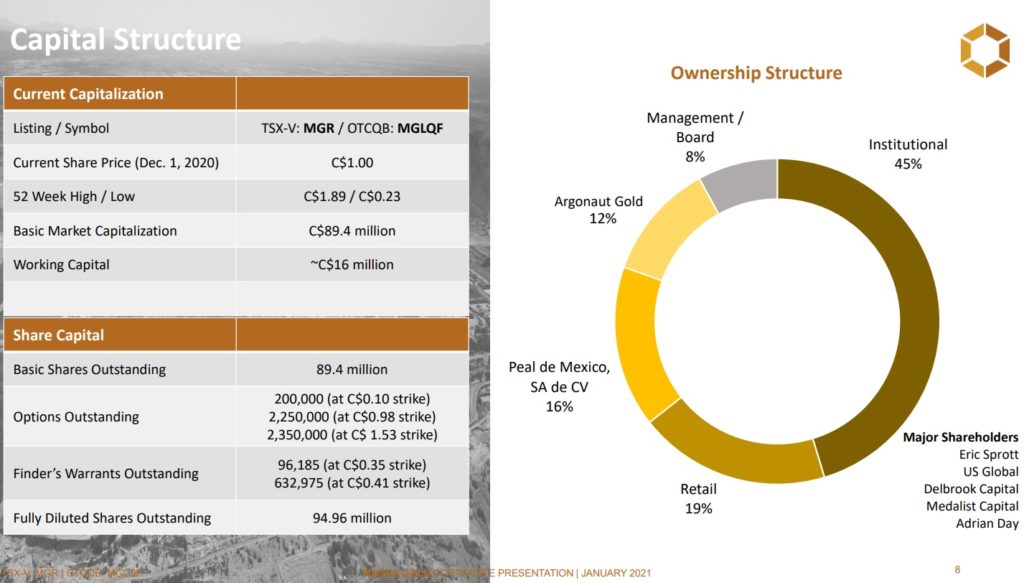 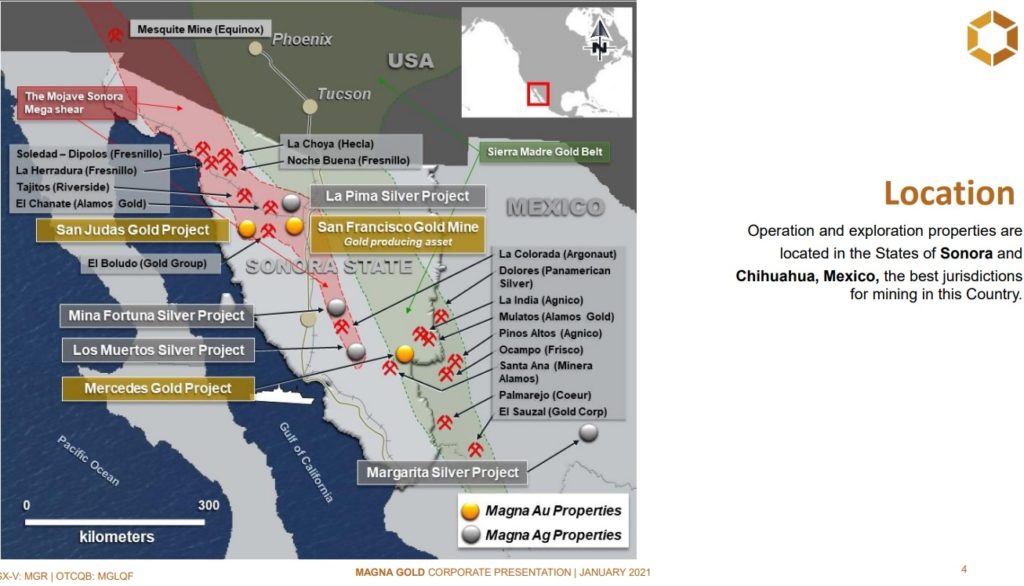 The company’s flagship asset is the San Francisco mine which is currently in production and is being ramped up. This includes underground development on top of the open pit mining: 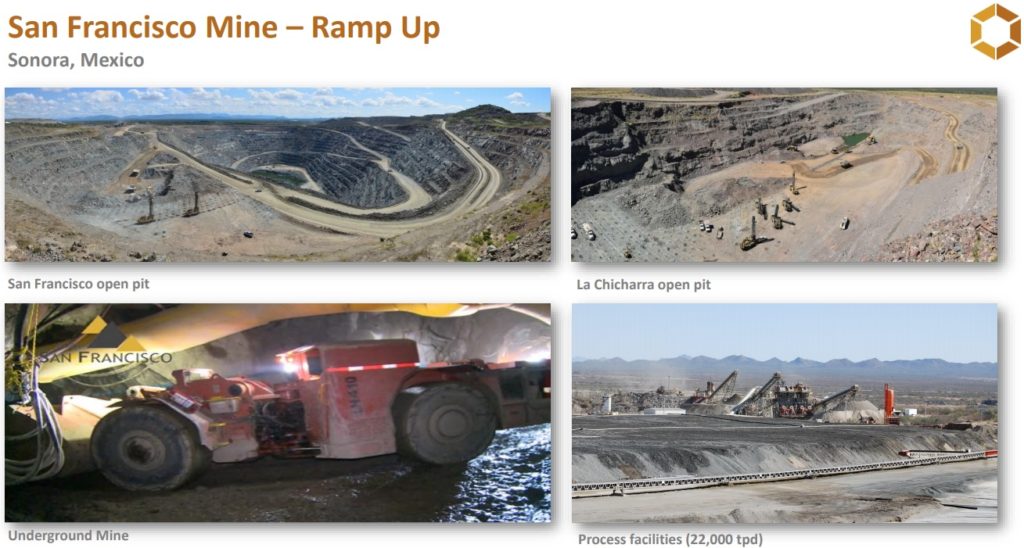 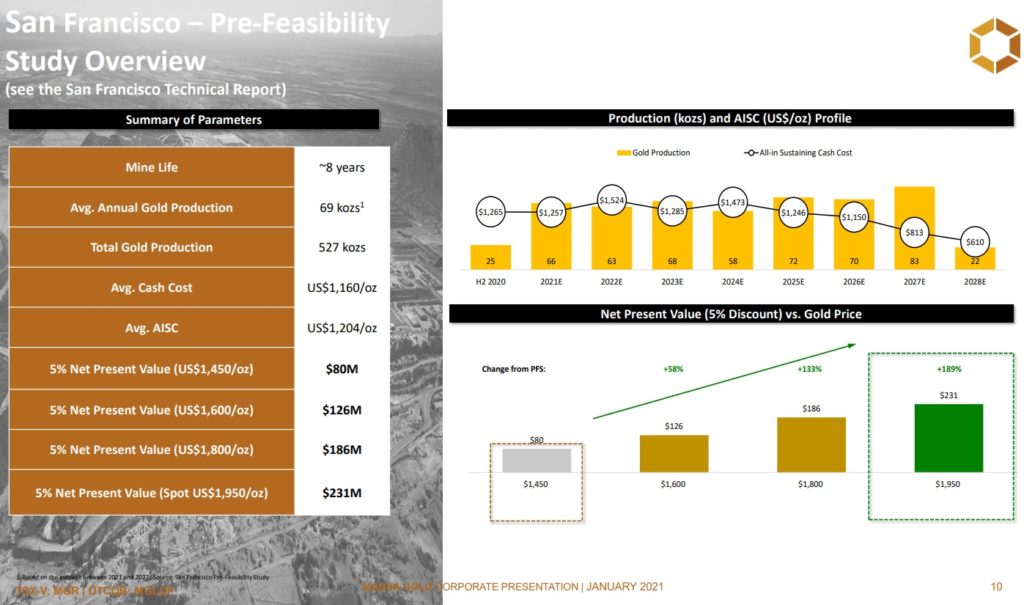 This valuation does not reflect the coming revamped mine plan nor any exploration success. On that note the company is currently drilling 30,000 m in an effort to add actual ounces to be mined as well: 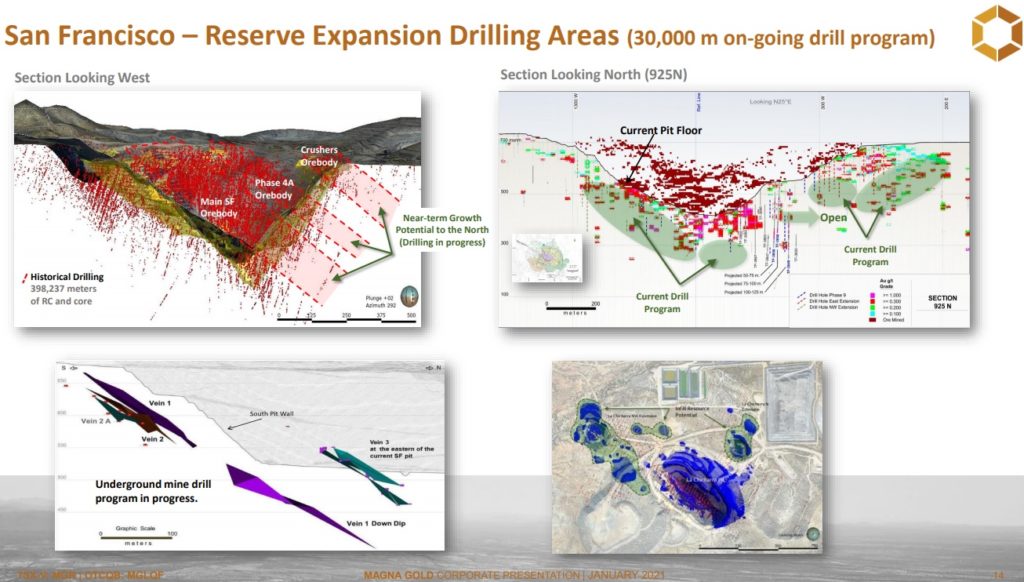 This drill campaign should obviously generate some news flow and hopefully add a lot of value to the mine and thus also shareholders. Magna controls a lot of ground both directly around the mine but also in the region: 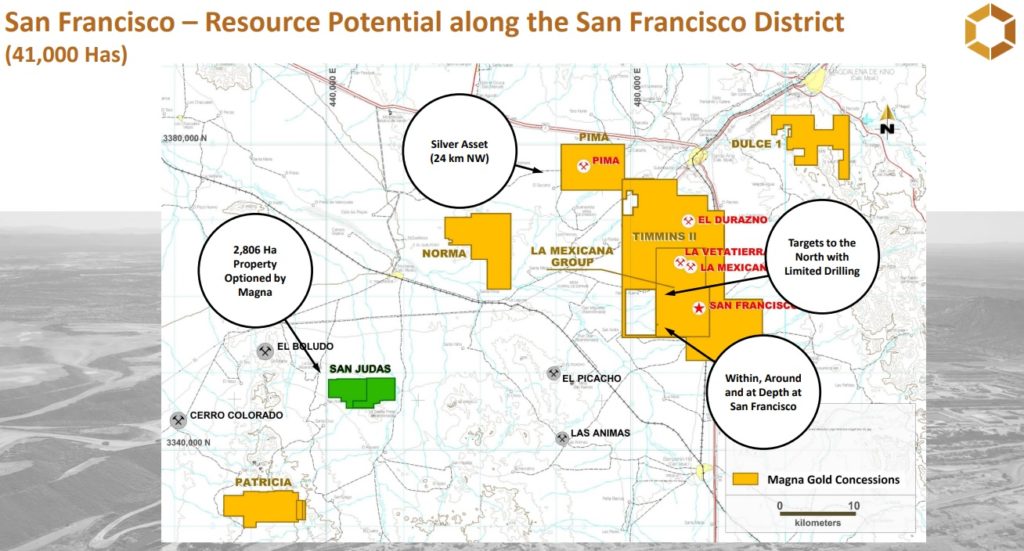 By now it should be obvious that the management team is quite ambitious to say the least. There are numerous avenues for potential growth through exploration across multiple projects and to have an operating mine in the heart of it all is quite the icing on the cake.

The Mercedes Project is an advanced stage gold and silver project located in Sonora, Mexico. There are several targets within the claim block: 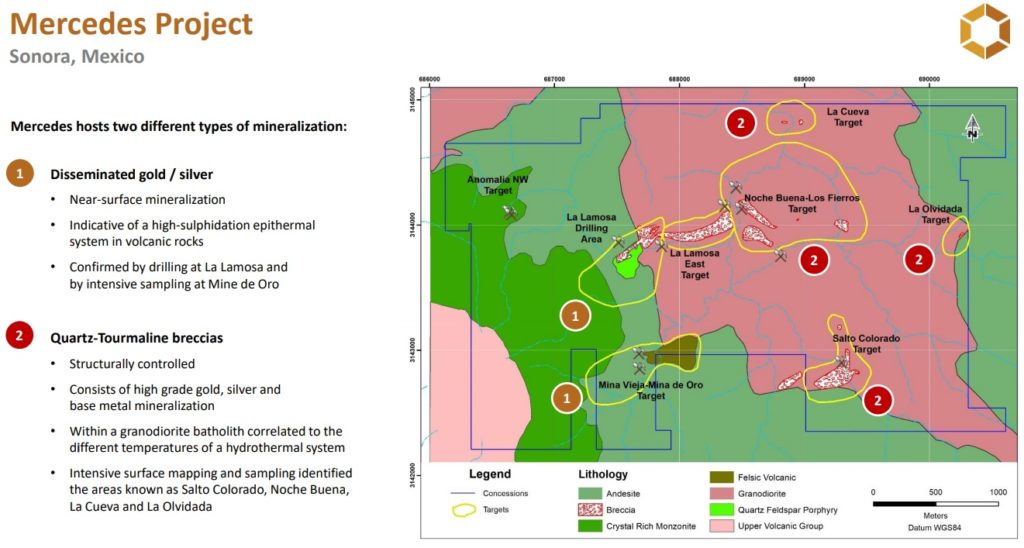 Near surface gold and silver mineralization has already been confirmed at the La Lamosa target via drilling: 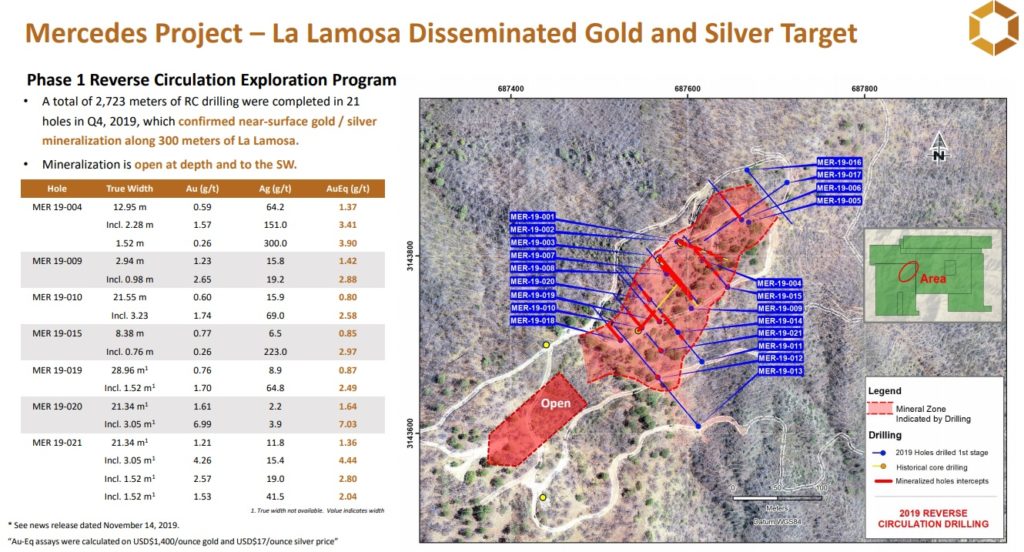 The best part about this project is that management believes it could be fast tracked to production. It’s not the highest grade and definitely not the biggest deposit around but it could be really cheap to get into production and by extension worth a few tens of millions at least. Then there is obviously the exploration potential that should have some value attributed to it.

The third advanced project is the Margarita Silver Project in Chihuahua, Mexico. I am personally quite excited about this project since the mineralization looks quite robust and silver is a hot market right now. Furthermore there was enough drilling done by the previous operation (Sable Resources) that said company was planning to do a maiden resource before Magna Gold acquired the project very recently: 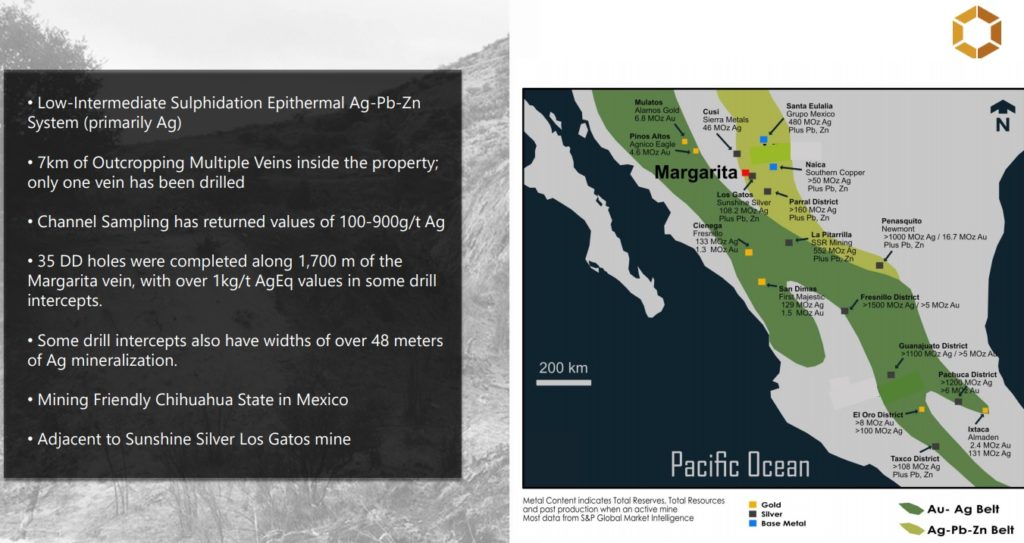 I think it is worth noting that the Margarita claim block is very close to the Los Gatos mine and that the Margarita is pretty much completely surrounded by claims belonging to Gatos Silver (Backed by Thomas Kaplan and the Electrum group).

As I previously mentioned the mineralization looks quite robust and many of the following hits are quite shallow on average: 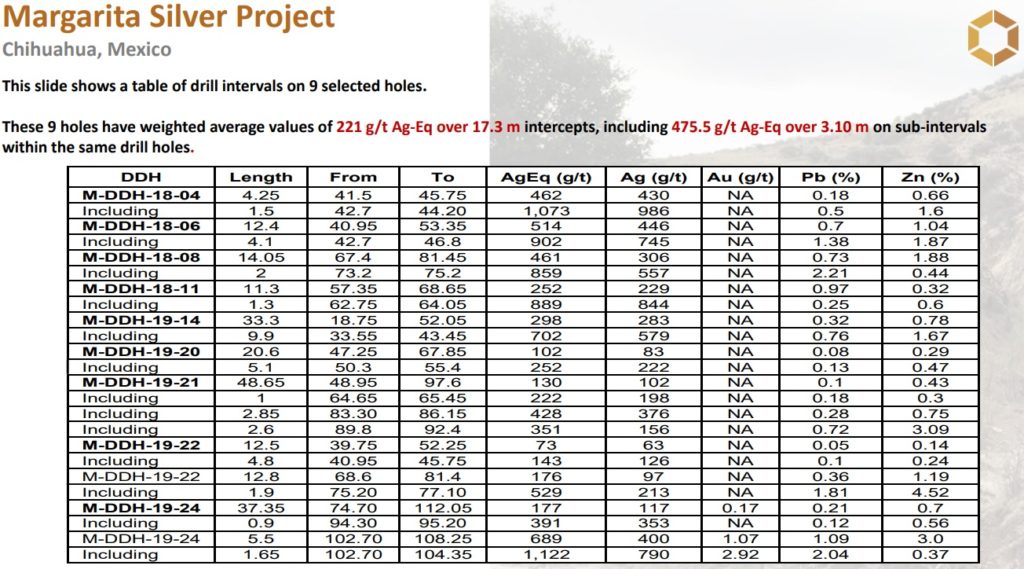 The following cross section is from Sable Resources (the previous operator): 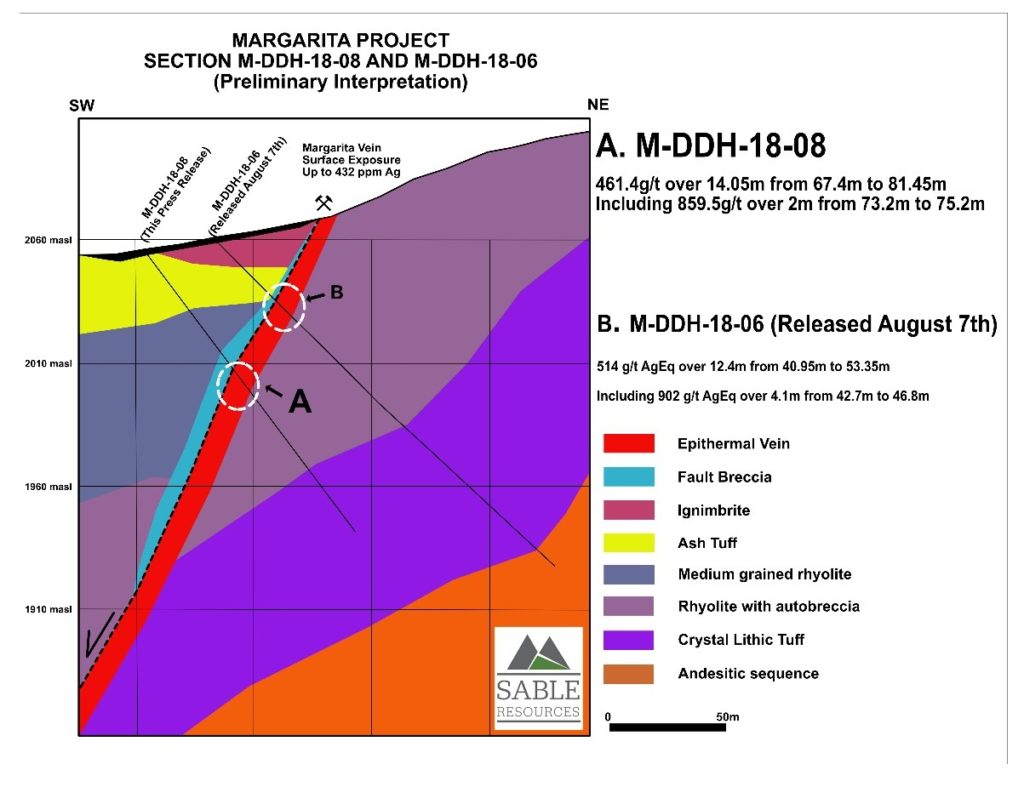 Given the location, drill results and the fact that Sable Resources thought it was advanced enough to plan for a maiden resource I would argue that this silver asset would get a nice valuation on a stand alone basis.

Note that the three projects discussed above does not make up the whole portfolio. Magna Gold has more projects than this and I would not be surprised to see even more acquisitions.

Sum of The Parts

I really do love multi-asset companies where I think I am able to buy the flagship asset on the cheap while getting a bunch of projects for free. The way I look at Magna is that I am buying a portfolio of projects that in reality several juniors could share. In other words I look at it as buying an operating gold mine pretty cheap, when gold is near $1,900 to boot, while also buying a vast gold and silver exploration portfolio. Ideally the company could be close to being self funded and achieve growth with limited dilution. It all depends on how aggressive and ambitious the management team is coupled with what opportunities the company is presented with. On that note I know that the management team is actively looking for more projects, including very advanced ones, to add to the portfolio.

Magna gold has stated that it will unveil a “silver strategy” in the coming months which I look forward to since I believe those projects could be worth at least some tens of millions alone.

The biggest risk for Magna Gold would be a much lower gold price since San Francisco is not a low cost operation. However, I think

For around US$61 M (Magna’s Enterprise Value) at C$1.05/share I see shareholders getting:

Lets just assume for a second that San Francisco will add recoverable ounces in the 30,000m drill campaign and that the new mine plan hikes up the NPV as well. In that case it doesn’t feel like a stretch to say that the currently producing San Francisco mine, alone, could be worth at least $300 M at the end of the day (this might be conservative). Anyway, I think it is pretty obvious at this point why I think US$61 M for ALL assets, potential in said assets and any future (hopefully) value creating business dealings the company does feels like quite the steal. Lastly I would just point out that I like the combination of both beta (producing mine, additional advanced projects with confirmed gold/silver) and alpha (exploration potential across multiple projects)…

Why? Because if gold/silver were to head lower there are alpha catalysts that could cushion the blow and if gold/silver starts ripping then the advanced assets will directly and indirectly go up in value as well as any additional ounces discovered obviously.

Lastly, nothing pays like growth. Given that I see Magna Gold as being very cheap today, with a lot of expected growth in the future, I would expect the stock to do very well in a gold- and silver bull market over the coming years. 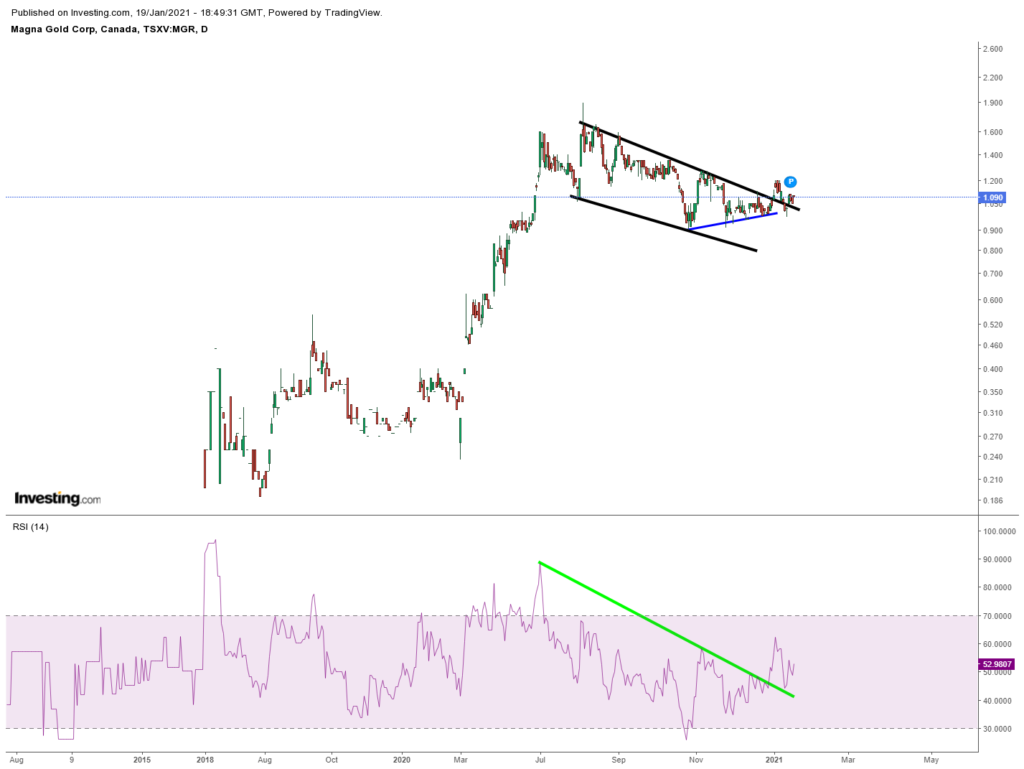 Note: This is not investment advice. I am not a geologist nor am I a mining engineer. This article is speculative and I can not guarantee 100% accuracy. Junior miners can be very volatile and risky. I have bought shares of Magna Gold Corp in the open market. I can buy or sell shares at any point in time. I was not paid by any entity to write this article but the company is a passive banner sponsor of The Hedgeless Horseman. Therefore you should assume I am biased so always do your own due diligence and make up your own mind as always.