Caleb Stroup, the President and CEO of the Company, states: “Since signing the earn-in agreement with Newcrest in August 2022, we have been building an extensive geological and geophysical dataset at Midas North.  The goal has been to apply the very best geoscientific tools available to identify feeder structures which have the potential to host high-grade epithermal gold-silver mineralization at depth below the extensive zone of alteration observed at surface.  In aggregate, the geophysical studies have done a phenomenal job of helping the Company understand the subsurface geology and have been instrumental in identifying several high-priority target areas for drill testing in the upcoming field season.  The Midas mine complex located immediately to the south serves as a clear geologic analog, with over two million ounces of gold and over 25 million ounces of silver historically produced from high-grade epithermal veins at Midas between 1998 and 2019(1 2) by operators such as Franco-Nevada, Newmont and Hecla.” 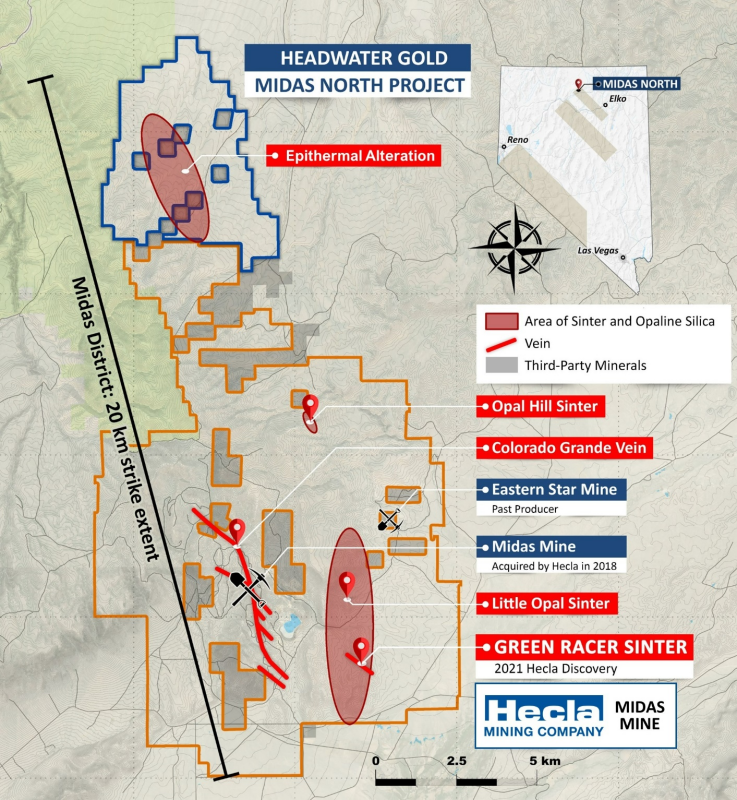 The results of the geophysical surveys confirm the utility of using magnetics, radiometrics, gravity and CSAMT resistivity, together with geology, to generate high-quality drill targets at Midas North below the broad area of favourable epithermal alteration outcropping at surface.

The 2022 geophysical programs consisted of: 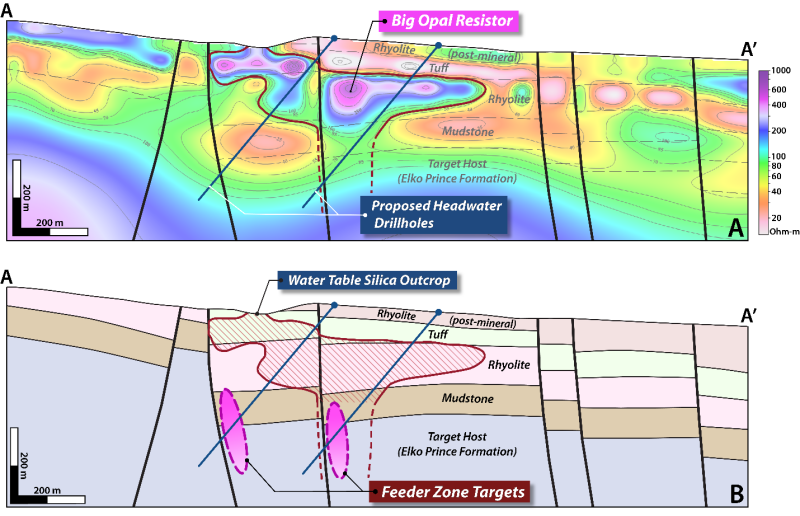 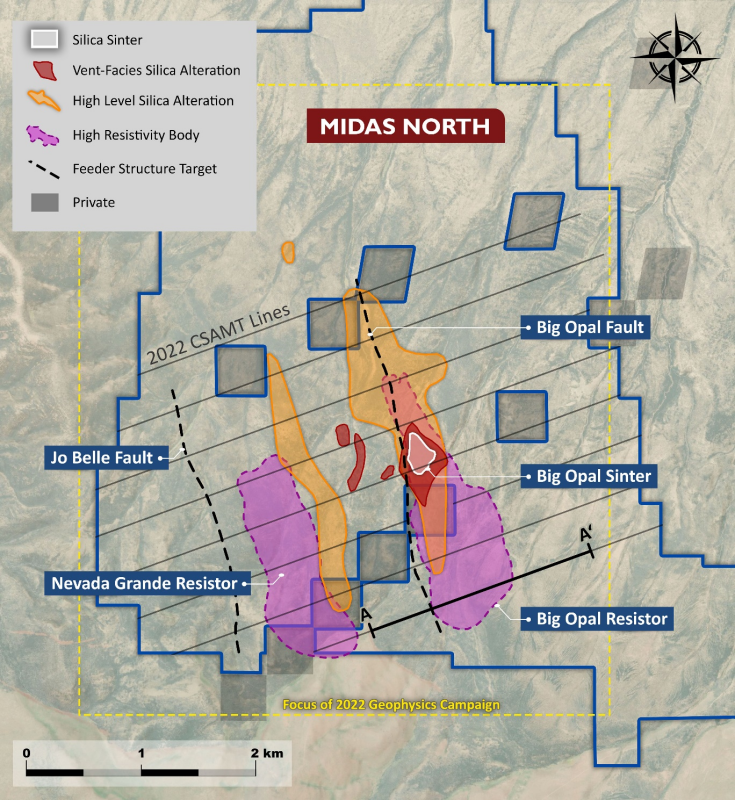 Headwater has identified multiple drill targets by analyzing the multi-parameter geophysical data described above.  The principal targets contain geophysical and geological characteristics indicating potential to host kilometre-scale feeder zones at depths of 200m to 400m below the outcropping mapped sinters and other high-level hot-spring-type alteration mapped at surface.

The principal targets are interpreted as follows: 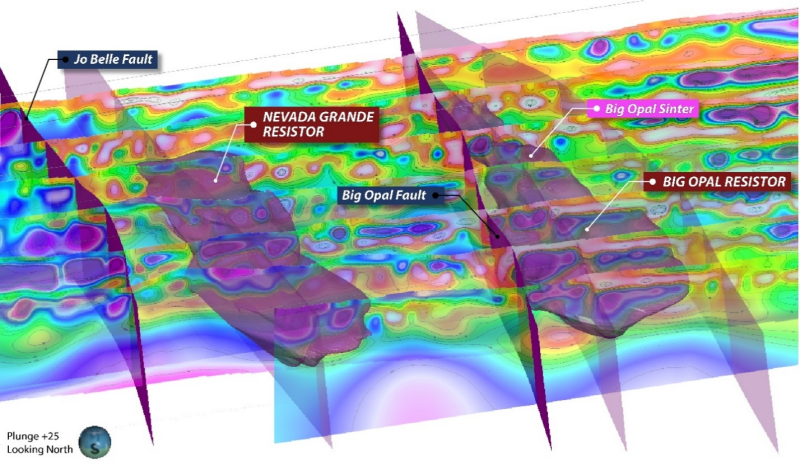 The CSAMT data collected by the Company has proven particularly effective for mapping the subsurface geometries of interpreted silica alteration beneath areas of high-level silica and steam-heated clay alteration, interpreted to represent the upper portion of a completely preserved epithermal system.  Multiple high-angle resistivity breaks occur adjacent to and beneath shallow, tabular resistive bodies, each with over 2 kilometres of strike length (Figures 2, 3 and 4).

Radiometric survey results and potassium data in particular show discrete linear radiometric highs which may represent corridors of illite-adularia alteration that are subparallel to the feeder structures interpreted from the CSAMT data.  The potassium data additionally reveal a broad, spatially continuous low coincident with the principal area of strong surface alteration (Figure 5) potentially attributable to a broad zone of argillic alteration. 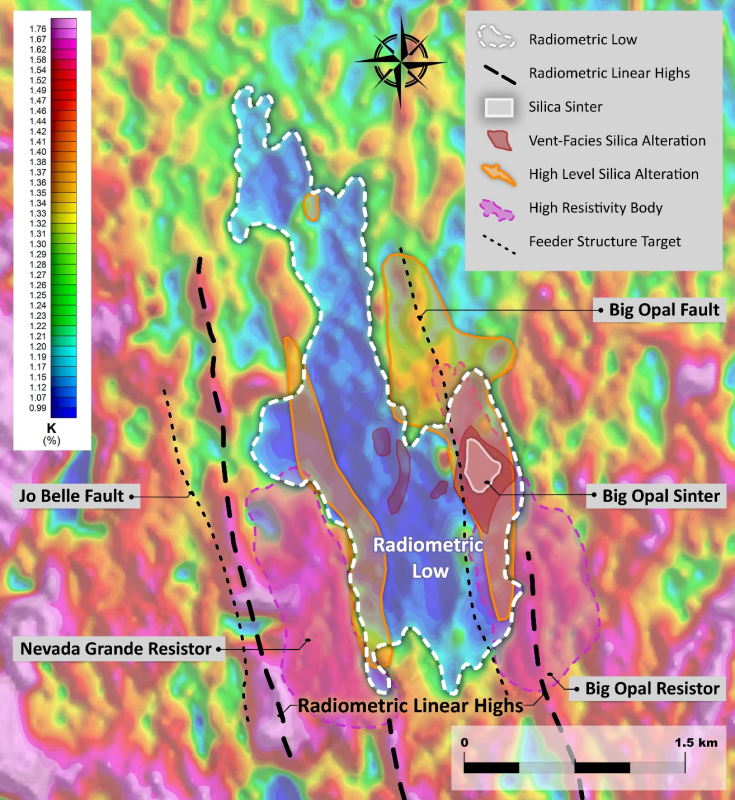 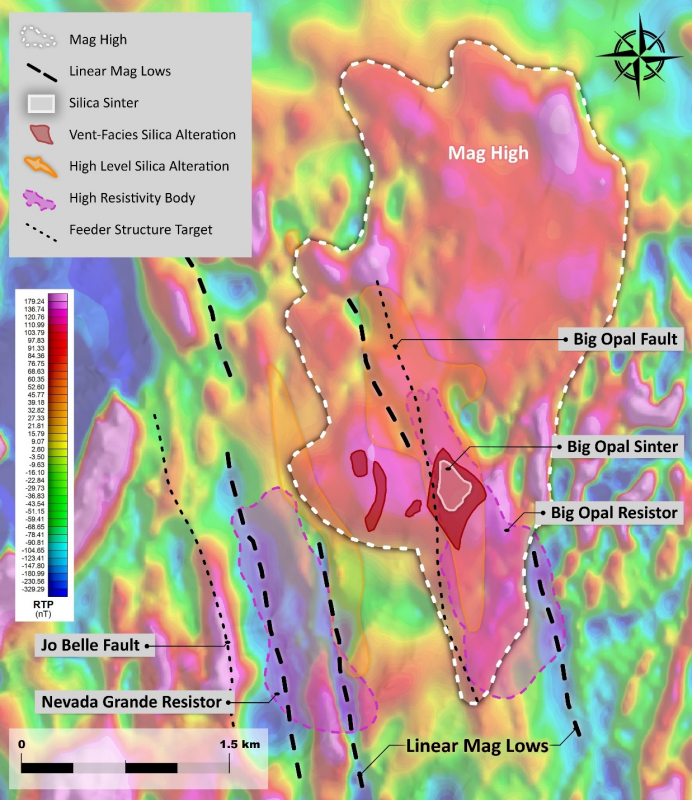 Figure 6:  Aeromagnetic geophysical survey highlighting several linear zones of magnetite-destructive alteration interpreted to represent potential feeder structures.  The strong magnetic signature beneath the Big Opal Sinter area is interpreted as a possible mafic sill which are common adjacent to the high-grade veins in the historic Midas district and elsewhere in Nevada1.

The core of the property is characterized by a broad gravity low which suggests a possible zone of pervasive argillic alteration in the surrounding volcanic host rock.  The gravity low broadly overlaps with the footprint of a radiometric low and encompasses the areas of highest intensity alteration mapped at surface.  The NNW elongation of the gravity low is consistent with property-wide structural trends detected by other geophysical surveys and surface mapping. 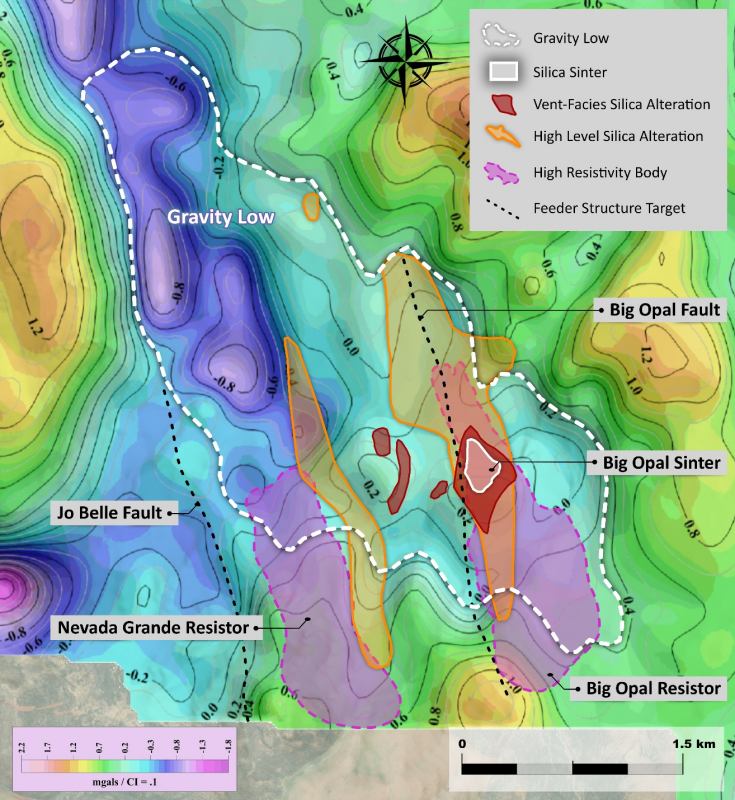 Figure 7: Residual gravity image showing a broad embayment in the central project area interpreted to correspond to the footprint of intense clay alteration.

About the Midas North Project

Newcrest is sole funding a firm minimum commitment of US$2,000,000 in exploration expenditures over a two-year period from August 2022 on the Midas North project or will pay the difference to Headwater.

During the staged earn-in phase, Newcrest has the right to earn up to an initial 65% interest in the Midas North project by sole funding exploration expenditures (inclusive of the minimum commitment) of US$30,000,000 over a 6-year period.

Newcrest retains the further right to earn an additional 10% interest in the project (for a total interest of 75%) by ceding a 2% net smelter return royalty to Headwater subject to certain partial buydown rights and completing a Pre-Feasibility Study, solely funded by Newcrest and which includes a minimum 1.5 million ounce gold or gold-equivalent resource within an additional 24-month period.

Headwater Gold Inc. (CSE: HWG, OTCQB: HWAUF) is a technically-driven mineral exploration company focused on the exploration and discovery of high-grade precious metal deposits in the Western USA.  Headwater is aggressively exploring one of the most well-endowed and mining-friendly jurisdictions in the world with a goal of making world-class precious metal discoveries.  Headwater has a large portfolio of epithermal vein exploration projects and a technical team comprised of experienced geologists with diverse capital markets, junior company and major mining company experience.  The Company is systematically drill testing several projects in Nevada, Idaho, and Oregon and in August 2022 announced a significant transaction with Newcrest Mining Limited where Newcrest acquired a 9.9% strategic equity interest in the Company and entered into earn-in agreements on four of Headwater’s projects.

For more information, please visit the Company’s website at www.headwatergold.com.

The technical information contained in this news release has been reviewed and approved by Scott Close, P.Geo (158157), a “Qualified Person” (“QP”) as defined in National Instrument 43-101 – Standards of Disclosure for Mineral Projects.

This news release includes certain forward-looking statements and forward-looking information (collectively, “forward-looking statements”) within the meaning of applicable Canadian securities legislation. All statements, other than statements of historical fact, included herein including, without limitation, statements regarding future capital expenditures, exploration activities and the specifications, targets, results, analyses, interpretations, benefits, costs and timing of them, Newcrest’s anticipated funding of the earn-in projects and the timing thereof, and the anticipated business plans and timing of future activities of the Company, are forward-looking statements. Although the Company believes that such statements are reasonable, it can give no assurance that such expectations will prove to be correct. Often, but not always, forward looking information can be identified by words such as “pro forma”, “plans”, “expects”, “may”, “should”, “budget”, “scheduled”, “estimates”, “forecasts”, “intends”, “anticipates”, “believes”, “potential” or variations of such words including negative variations thereof, and phrases that refer to certain actions, events or results that may, could, would, might or will occur or be taken or achieved. Forward-looking statements involve known and unknown risks, uncertainties and other factors which may cause the actual results, performance or achievements of the Company to differ materially from any future results, performance or achievements expressed or implied by the forward-looking statements. Such risks and other factors include, among others, risks related to the anticipated business plans and timing of future activities of the Company, including the Company’s exploration plans and the proposed expenditures for exploration work thereon, the ability of the Company to obtain sufficient financing to fund its business activities and plans, the risk that Newcrest will not elect to obtain any additional interest in the Projects in excess of the minimum commitment, the ability of the Company to obtain the required permits, changes in laws, regulations and policies affecting mining operations, the Company’s limited operating history, currency fluctuations, title disputes or claims, environmental issues and liabilities, as well as those factors discussed under the heading “Risk Factors” in the Company’s prospectus dated May 26, 2021 and other filings of the Company with the Canadian Securities Authorities, copies of which can be found under the Company’s profile on the SEDAR website at www.sedar.com.