Eskay Mining (ESK.V): Waiting For The Mother of All Breakouts

Eskay Mining has started to rock and it has become a huge holding for me. So far I haven’t sold a single share simply because I think this is just beginning and I believe that this story could be one of the most exciting ones in 2021 for numerous reasons…

Lets first recap the first results out of the maiden drill campaign over at TV/JEFF:

… First of all it’s truly remarkable to see such good hits in ALL holes. Many maiden drill campaigns done by juniors fail to even get one good hit. Second of all, What is fascinating is that these targets are 2 km apart, and yet both show excellent mineralization. On that note the team believe TV and Jeff might really be “part of a larger approximately 6 km long corridor along which numerous electrically conductive anomalies occur.”. By just looking at the geophysics slide in the presentation it does seem that there might be distinct VMS bodies that measure around 4km in length around TV and Jeff. This would mean that TV/Jeff alone could be 3-4 times the footprint of the original Eskay Creek deposit. It’s worth noting that Skeen Resources has drilled out a 1km long deposit from the “remnants” of the Eskay Creek mine and it has a NPV of around C$1 B at today’s gold and silver prices according to the company’s PEA…

Which of course makes me think about what a system which might be 3-4 times the size could be worth.

We also got this snippet from the latest NR:

“Mineralization encountered to date is predominantly of stratabound stockwork to massive sulphide replacement style hosted by mudstone and peperite sills (intrusive rocks) within the Hazelton Group, the same host rocks hosting the Eskay Creek Deposit approximately 13 km to the north. Intercepts that Eskay Mining has encountered in its drill program are remarkably similar in grade, thickness and style to those recently encountered in the Lower and Even Lower mudstone units drilled by Skeena Resources.”

… Which basically suggests that the hits so far are in the same stratigraphic targets that Skeena Resources call the “Lower Mudstone” and “Even Lower Mudstone” targets. The bonanza zone at the original Eskay Creek mine was located “higher up” in the stratigraphy and on that note we got this from the latest NR:

“Both the TV and Jeff deposits are wide open along strike, down dip and up section. Key prospective stratigraphy including the mudstone that is host to high grade mineralization at Eskay Creek that is sandwiched between a footwall rhyolite and hanging wall basalt has yet to be drilled at TV and Jeff. This unit is hypothesized to be a short distance up section from the current drill holes making for a very intriguing untested target.“

… Which means that the best, in terms of grade, might be yet to come. Basically Eskay Mining seem to have multiple zones of mineralization at TV/Jeff and the zone that hosted bonanza grade mineralization at Eskay Creek has not even been drilled yet…

Think about this for a minute. Skeena Resources has, again, drilled a 1 km long deposit around what was left of the Eskay Creek deposit which is worth around C$1 B today. So what if TV/Jeff is not only a giant system that is 3-4 times as large but ALSO has PRESERVED zones of Eskay Creek type bonanza mineralization? If that is the case then one can’t just say that the potential is 3-4 times that of Skeena’s current C$1 B deposit since that does only factor in the potential size but not the potential quality (this is obviously a crude way of measuring blue sky potential but I hope you get the point).

Another snippet from the latest NR:

“Eskay Mining is particularly excited by the presence of local bonanza grades of Au and Ag within recent drill intercepts suggesting the potential for discovery of high-grade mineralization similar to that mined historically at Eskay Creek. Several holes yet to be assayed displayed local intervals of silver rich minerals such as pyrargyrite and the native gold-silver alloy, electrum. Assays from these holes are eagerly awaited.”

… If I remember correctly Quinton has stated that the intercepts with “pyrargyrite” and “electrum” looks to be in feeder zones. These feeder zones would have brought mineralized fluids up to the sea floor which then formed the VMS mounds (the main prizes). So if we know Eskay has hit feeder zones with visible evidence of precious metal mineralization, and said zones are CLOSEST in terms of stratigraphic location to where the bonanza zone formed at the original Eskay Creek deposit, then the evidence is mounting that there should really be more precious metal rich VMS mounds at TV/Jeff akin to Eskay Creek. On that note Kaiser estimated that the original Eskay Creek mine (1 km long and hosted in the uppermost unit) would be worth over C$4 B today.

If all this wasn’t enough, TV/Jeff is still just the start:

“These discoveries confirm the presence of new Eskay Creek type massive sulphide deposits within the highly propsective Eskay graben, or geologic trough, that extends southward from the Eskay Creek deposit. Approximtely 85% of this belt occurs within Eskay Mining’s tenure. In 2020, Eskay Mining has identified numerous other VMS targets on its tenure. The Company plans an aggressive +30,000 m drill program in 2021 to follow up on the TV and Jeff discoveries but to also test at least another dozen high priority drill targets.”

TV/Jeff could be a true tier #1 monster that is a lot bigger than Skeena’s C$1 B deposit AND might have Eskay Creek bonanza style mineralization preserved as well. Furthermore there are at least a DOZEN high priority targets beyond TV/Jeff and Eskay Mining controls 85% of the entire belt.

A very interesting aspect is that the share price looks to have broken, or is close to breaking, one of the biggest (if not THE biggest) consolidation patterns I have seen in a junior. We are talking a multi decade long consolidation and as a rule of thumb: “The longer the consolidation the greater the move”. Personally I think we will see the share price reach levels in the coming years, that I will not even try to guess, and why I have not sold a share so far…

(Patiently waiting for the mother of all breakouts…) 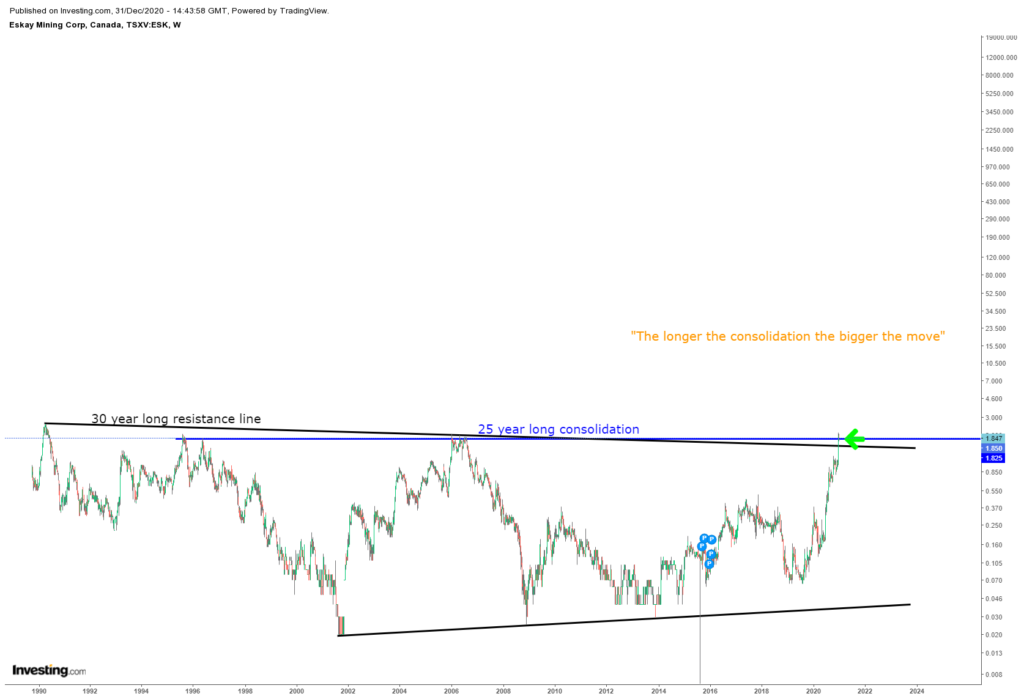 My suspicion is that it might be the next batch of assays from the maiden drill campaign that cements the break out (if not before this). In other words I think, even after the recent moves, that we are about to BEGIN the real journey.

Note: This is not trading or investing advice. I can’t guarantee the accuracy of this article. I own a lot of shares of Eskay Mining and the company is a banner sponsor of The Hedgeless Horseman. Always do your own due diligence and make up your own mind!

5 thoughts on “Eskay Mining (ESK.V): Waiting For The Mother of All Breakouts”